What is up with GrrrReddit? Every editor and writer I know has been silently banned from Reddit. Is this really Social Networking? 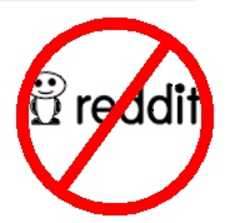 Some of the best comments I read from other banned writers (and there are a LOT of them) is from this site: “http://dsandler.org/wp/archives/2007/09/29/banned-from-reddit”

Although most of the comments are interesting, my favorite is the first one: “Reddit might be putting themselves on shaky ground by censoring you – because it means that they implicitly assume responsibility for filtering the content on the site, and therefore could be sued for failing to filter some illegal content.”

It’s interesting to me that someone who has only ever submitted 4 articles was banned. It’s also interesting, that freedom of speech apparently doesn’t exist in the land of Reddit.

Apparently, you’re allowed to submit stories … as long as they agree with them.

Remind you of press censorship in China anyone? Remind anyone of Hitler’s media campaigns, where you could write anything you wanted, so long as it was something the Nazi party approved of? Isn’t this America?

It’s my opinion that this clique behavior is exactly that. Reddit is the “Mean Girls” stereotype. As long as you have the right hair, the right clothes, and the right money, you can submit.

All other writers, beware.

NewsBlaze isn’t one of the giant newspapers. We’re just a sincere daily newspaper trying to submit high quality news that you can’t get anywhere else.

As all editors of NewsBlaze have been banned, we encourage any writers who want to post stories about their banning experiences by Reddit, or their opinions of bannings and other unreasonable censorship, to submit them to us through [email protected]

Reddit, no need to ban us. We’re banning you.

Banned by the Blogs