It may feel like a slow start to the 2013 Atlantic Hurricane Season, but AccuWeather.com says this apparent lull is normal, and the most active storms are still to come.

In the past 20 years, a few notorious storms have caused devastation on the east coast of the U.S. during the early summer months. The memory of those storms leads to the public perception of July and August always seeing monster storms, and the associated devastation.

Stuck in our collective memory are Hurricane Dennis in July 2005, and further back, Hurricane Andrew, in mid-August 1992. Those two storms were early, and the actual peak season for hurricanes is late August to late October.

Two storms that prove the point are the superstorm Sandy, that hit the east coast in October last year and Hurricane Wilma in October 2005, just two months after Dennis.

Although not as powerful as those two, 2013 has already seen four named storms. AccuWeather says they expect the number of storms continue to rise in September and October, and they may be even more frequent.

“This year, we’ve had two tropical systems that developed in the deep tropics, Dorian and Chantal, which is somewhat unusual early in the season,” AccuWeather.com Expert Senior Meteorologist Dan Kottlowski said. “Typically through July, on average, we have about two tropical systems. It’s not until about August 20 that we end up with four.”

This puts the seemingly slow 2013 season slightly ahead of schedule. 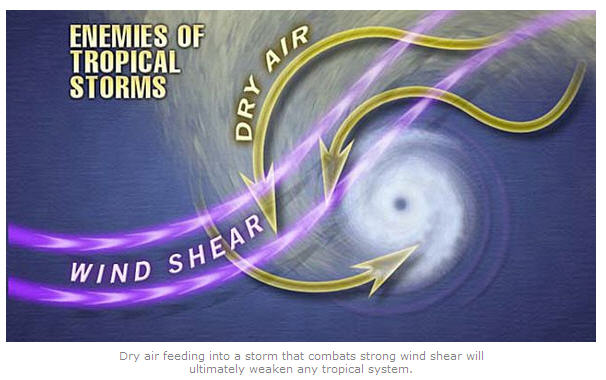 June 1 marks the official start of the Atlantic Hurricane Season, but several inhibiting factors, common at the start of the season, combine to limit both the strength and frequency of any storms, and they can prevent them altogether.

Wind shear and Saharan dust are two main factors that prevent the conditions needed to form storms in July and August.

The dry Saharan dust floats off the coast of Africa, drifting the 5,000 miles to Florida. The dust soaks up moisture from the air, removing one of the major conditions needed for storm formation.

After the Saharan dust passes and wind shear reduces, in September and October, the conditions needed for storm formation are present once again.

The reason Dorian and Chantal were able to form so early in the Atlantic Basin this year, was that there was little Saharan dust and weak wind shear. AccuWeather says in September and October, water temperatures peak, Saharan dust dies down, and prime conditions exist for tropical development.

“This gives us some insight that once these inhibiting factors go away, things are ready to develop,” Kottlowski said. “If we can get at least 2 more storms by the end of August that will put us on track to a very active season.”

The AccuWeather.com 2013 Atlantic Hurricane Forecast predicts 16 tropical storms, eight hurricanes and four major hurricanes. Their Fall Forecast is due for release next Wednesday, Aug. 14 and will revisit in detail the potential for fall tropical activity.

Thanks to Jillian MacMath, AccuWeather.com Staff Writer, for the information used in this story.