A strong earthquake (magnitude 6.5) struck off the shore of northern California at 4.27 pm Saturday (about 33 miles from the coastal city of Eureka). A number of aftershocks followed, the strongest at 4.5 magnitude.

There have been no reports of any injuries, but thousands of people were left without power Saturday evening.

Apart from water line breaks, power lines down, broken windows and a few buildings that had some bricks fall off into the street, there appears to have been no serious damage caused.

A reporter for the Times-Standard of Eureka, said he was working on the second floor of the newspaper’s concrete building when he and his colleagues felt the quake. “We are used to feeling small ones,” he said, “but after the first few seconds, we looked at each other and said this is not a small one.” Adding “There’s not as much as you might think with a 6.5” describing much of the damage as broken glass on storefronts and tiles on floors and ceilings popping.

Although this quake occurred under the sea, there was no tsunami warning issued. 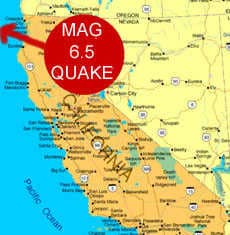 Readers may remember an article I wrote in November “Massive Earthquake Predicted for California within a Month.” Whilst the prediction was for a much larger quake, and for it to happen over a month ago, the seismic activity in the area suggested that the danger had not passed.

There have been an unusually high number of earthquakes around the “Ring of Fire” lately, and it seemed inevitable that California would experience a large tremor eventually, which occurred close to the location mentioned in the prediction.

Whether this quake will replace the magnitude 8.0 expected, or is a warning of more to come; only time will tell.

Those living in California know that another “big one” will come along one day and most scientists have suggested that this will happen within the next 10 years or so. All we can do is hope that it occurs in an area that will do the least damage, and not come too soon.