A friend and “amateur seismologist” has been studying earthquakes for many years and is used to seeing the regular quakes that appear all over the world.

As even an experienced and professional seismologist will tell you, predicting earthquakes is something we have yet to master, but my friend insists that on this occasion he is going to be right.

The basis for his prediction is connected to the larger than usual earthquakes we have seen in the last few weeks. He believes the movement of certain tectonic plates suggests a strong possibility of a huge earthquake in the California region (magnitude 8.0 or higher).

It is likely (so he says) that other regions will also be affected by this movement at much the same time (such as Northern India, Southern China and areas North East of Australia). 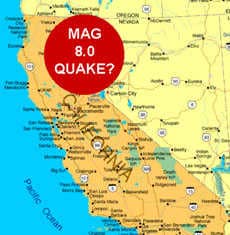 One of the dangers of such a large quake in the California region is the possible affects it might have on the super volcano sitting under Yellowstone Park, and whether a large disturbance might trigger an eruption.

For those who follow earthquake reports on the internet, you will see an exceptionally large number of quakes in the magnitude 5.0 and higher range appearing in less usual locations just lately.

This of course is no guarantee that larger quakes are on the way and my friend may be completely wrong with his prediction (hopefully), but the earthquake patterns are a little strange.

As the possibility of a large earthquake is far from certain (no matter where it is predicted), there is very little we can do about it. However, if you live in California and feel a larger than usual tremor within the next four weeks, you may want to take it more seriously than you normally do.

With any luck the next month will pass without any disasters and we can file this prediction in the “got it wrong cabinet” along with the many others already there.