Viewing history and its iconic major players from the distant past through a contemporary idiomatic lens, can be an ill advised idea, if not a total disaster. Such is the unfortunate case with The Last Station, a satirical Tolstoy roast that may have evaded the stilted period drama pitfalls of a BBC production, but lends itself less to an illuminating feature biopic, than a manic extended dressup skit on SNL. 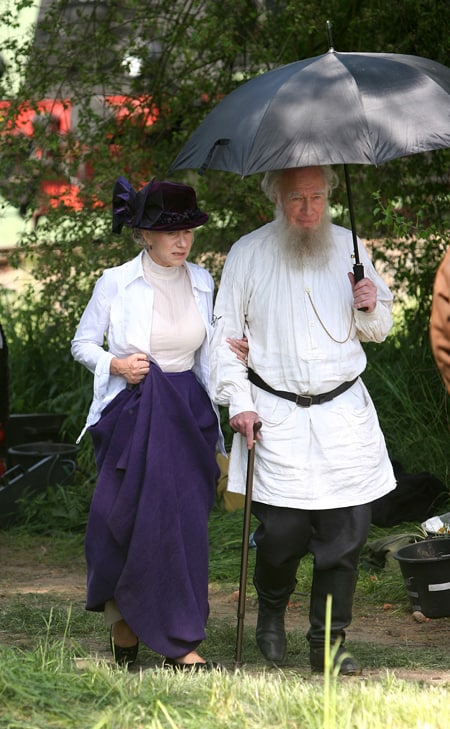 And among an assortment of opportunistic disciples elbowing their way into the superstar novelist’s private affairs is the shady Chertkov (Paul Giamatti). He intrudes with serpentine charm here as a conniving aspiring executor to Tolstoy’s lucrative estate, plotting to disinherit the countess and their thirteen children by seizing future royalty rights under the guise of public domain, and in the name of literary posterity. Never mind that the long devoted Octomom plus five also wrote extra copies by hand of War And Peace for her ingrate spouse no less than six times, director Michael Hoffman (Soapdish) has rendered her as such an utterly unpleasant 19th century nag that audiences are likely to care less.

And the distracting entry of the shy and clumsy new assistant Valentin (James McAvoy) into the plot, that seems more like a series of shenanigans than an engaging story, doesn’t help matters either. This, in a narrative already riddled with disruptive nonsensical detours, and repeatedly mistaking ridicule for humor.

Less Leo Tolstoy than Michael Jackson, The Last Station ponders with grating irreverent gusto, the psychologically disorienting pitfalls of public adulation. But if it’s literary enlightenment, or really anything at all about the mind of this historical creative giant, best to check out your local library instead of the movie theater.