Even though Britain’s official UFO hotline and “investigation” unit was closed at the beginning of December, it is likely that members of the public will still try to submit reports in this direction.

Unfortunately, according to a previously secret memo, these reports will be kept for 30 days and then destroyed!

The memo also states that “The dedicated UFO hotline answer phone service and e-mail address serve no defence purpose, and merely encourage the generation of correspondence of no defence value” 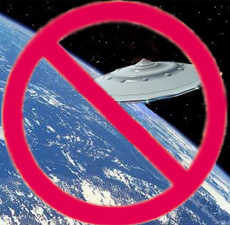 Does this mean that if 100 credible witnesses report the landing of a dozen UFO’s, the Ministry of Defence will not consider this a potential danger to security?

The MoD say that the number of UFO reports in 2009 soared, taking up extra resources and diverting staff from “more valuable” defence-related activities. Perhaps the “more valuable” activities they refer to are the arrests of “suspected” terrorists, who are held in custody for a few weeks, and then released, because of a lack of evidence?

Maybe this news is a blessing in disguise? All the previous reports made to the MoD were kept from the public, and those released recently probably excluded the most important sightings. According to some reports, MoD officials spent a considerable amount of time censoring remarks placed on the files by their staff (humourous comments)

Do we really need a government department, strongly suspected of covering up UFO reports, to gather this information? Especially as they keep it secret and don’t investigate the information they receive.

The Sun newspaper have offered their services in replacing the MoD as an “official” source for submitting UFO reports, but this is probably taking us from bad to worse? How can we place such information in the hands of some tabloid obsessed with sex?

I would like to propose an alternative solution. There are many sites on the internet that do a great job of collecting UFO reports and frequently carry out professional investigations of their own. The only problem with this, is that all these reports are scattered and the individual groups rarely work together.

Generally speaking, UFO sites do not choose to work as individuals and are quite happy to share information, because the most important factor is pursuing the truth. However, setting up a central organization that can bring all these groups together is not an easy task, and will require dedicated members, time and money.

Should such an organization be created, it must recognise that each UFO group should be allowed to operate in a way that they are comfortable with, although it would be desirable if information was collected in a particular manner (to obtain consistency).

Each site would continue to publish reports as they normally do, but a copy would also be available on a central site. This central site would also take reports from the public, which can be redirected to more local members, so that an investigation can be put in motion (provided they have people who can do this).

I strongly believe that such an organization would greatly benefit all those involved, and the public would certainly appreciate sharing their experiences with a group of people who take this subject seriously.

I would therefore like to invite everyone who runs a site covering UFO/Alien reports, to contact me if they like the idea of having some organization involved in gathering all the information in one place (with links to all the individual sites). Your comments on how you would like to see this run would be very welcome.

Your response will place you under no obligation to become involved in such a project, and the support (if any) this idea receives will dictate the next step. If there is sufficient interest, I will contact everyone who responds with further suggestions and between us we can hopefully proceed further.

I look forward to hearing from as many people as possible. Let’s not leave UFO research in the hands of some tabloid, it belongs in the care of professionals!

You can contact me at the following email address: [email protected]