According to a recent article, a German UFO expert, Hartwig Hausdorf, claims that the NASA probe Voyager 2 has started transmitting “strange, unintelligible signals”

The probe was launched 33 years ago and contains a disc that provides music and greetings in 55 languages, just in case it is ever discovered by intelligent alien life.

Mr. Hausdorf has said that the probe began sending distorted messages last month from its location near the edge of the solar system, information that NASA has been unable to decode.

In a comment published in The Bild newspaper, Hausdorf said “It seems almost as if someone had reprogrammed or hijacked the probe, thus perhaps we do not yet know the whole truth.” 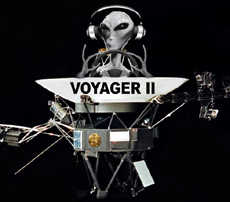 NASA has indicated that the problem may be a “data transmission fault” connected with the probe’s computer memory.

Voyager 2 is so far from the Earth now that transmissions take around 13 hours to reach our planet. However, on April 22, all signals ceased.

There could be a number of reasons why it transmitted strange signals, and why these signals have now stopped. NASA’s explanation is perhaps the most reasonable, but we can’t rule out the possibility that Mr. Hausdorf’s claim of an Alien hijacking is the cause.

You can read more UFO and Alien stories on Newsblaze by clicking HERE.