The detection of a UFO forced the closure of Xiaoshan airport for an hour, grounding outbound flights and diverting inbound ones to other airports in Ningbo and Wuxi. A total of eighteen flights were affected in all.

A flight crew first noticed the UFO as they were preparing to land and informed air traffic control. The authorities took immediate action.

Needless to say, the sighting has caused quite a stir in China and with UFO enthusiasts all over the world. As usual, there were plenty of explanations to suggest that this was not some craft from another planet, and some have said it might be a US bomber flying over China. 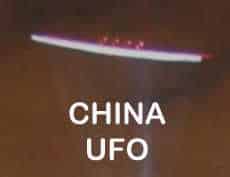 However, the idea of this UFO being a US bomber (or Russian missile) is unlikely, and whilst the possibility of it being a Chinese military craft can not be ruled out, this too would also be a surprise.

Approximately one hour before the UFO sighting at Xiaoshan airport, Hangzhou residents took photos of a craft that seem to match the object seen later.

The object was described as “hovering” and bathed in golden light showing a comet-like tail. Another resident said he felt a beam of light over his head and looked up to see a “streak of bright, white light flying across the sky,”

Shortly after the sighting it was confirmed that an investigation was to be carried out, but a later report indicated that the mystery had been solved. Unfortunately, details could not be released because of a military connection.

An official explanation is awaited on this sighting.

China has seen a number of spectacular “UFO’s” in recent times, many of which have been difficult to explain. As the country continues to make technological advances in many areas, it is possible that this could include more sophisticated planes. However, one would not expect to see such advances made so public.

There would appear to have been a fall in UFO sightings recently and those that are coming through are far from conclusive. One such report was of UFO’s over Neath Valley, but the objects seen in the video are either radio controlled planes, birds or kites.

Brazil has had its fair share of UFO sightings, and I hope to write an article on these shortly (thanks to some information that was sent to me recently).