Spanish Broadcasting System (SBS) (NASDAQ: SBSA) announced today the launch of “El Vacilon de Miami,” a new morning show for the radio station WXDJ El Zol 95 FM. The new morning show will be hosted by the charismatic Nio Encendio and the popular “Pichy Boys”: Alejandro Gonzalez and Maikel Rodriguez (El Pichy Films) and air Monday to Friday from 6:00 AM to 10:00 AM beginning March 3.

SBS radio has had several successful versions of the “Vacilon De La Manana” brand across its network. The program’s success is based on a concept similar to “Saturday Night Live,” but on Spanish radio. The show’s premise will remain the same with well-known on air talent providing a great mix of music, entertainment news, sports, parodies, jokes and interviews. 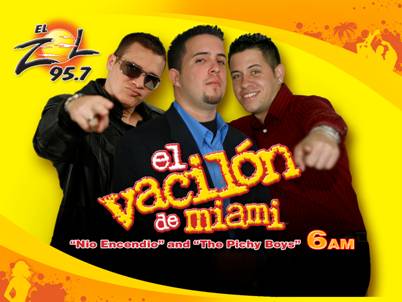 Born and raised in Miami, Nio began his radio career in 1997 by producing rap jingles for a radio station in Tampa, Florida. In 1999 he was named the official Spanish voice for the Tampa Bay Buccaneers and soon catapulted himself into the national spotlight of Spanish sports. Nio has also proven to be one of the first Latin mixologists (DJ) in the industry. Now, he has come back to his hometown to be the quarterback of “El Vacilon De Miami” with comedians, Alejandro and Maikel.

Alejandro and Maikel are two, dynamic, young comedians who were discovered on YouTube. Their story is very unique. By starting off dubbing major Hollywood productions such as “The 300,” “Harry Potter” and “Al Cubano” (“Cuban Style”), they created various characters that became cult heroes all over cyberspace, and are among the most popular clips being forwarded on the Internet. Some of these famous characters are now on radio such as Cuco and Timba, Potage, La Tia Fela, Pototo & Bonatilla and many more. Like Nio, they have been interviewed by many local TV stations and are the new craze of Miami.