I saw in the Monticello Times newspaper that the old movie theater is going to be tore down and a new drug store to be built in its place. When I heard that, my memory bank got pretty stirred up because I knew a band that practiced in this building. I felt sad because not only they loose a place to practice, they also need to find another place to write and practice their music. To celebrate the occasion, the band will don their gear one last time and haul it up to the rooftop of the theater. This will be the concert of all concerts. 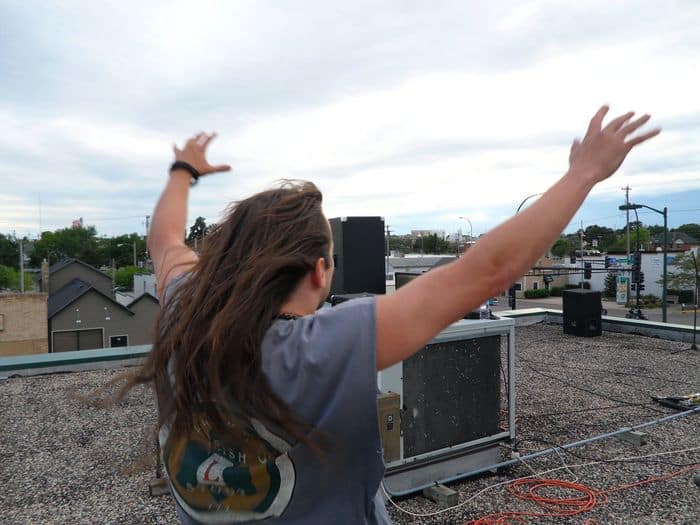 the equipment to. Then it took two of them to carry the equipment up the steep roof to where they were going. Of course when you get all done with that heavy lifting, you have a happy hi-sign to look at. Who is this band? BILETNIKOFF!

Biletnikoff is named after the Wide Receiver Fred Biletnikoff who is now retired as an NFL player. The band is made up of Atom (guitarist, singer), Derek (Drums), Randall (Keyboard), and Phil (Bass). They do have gigs around Minneapolis, MN and the outlying areas. Their most remembered gig is the Caboose in Minneapolis because its a prestigious place to play. Some of the best known bands play there often.

We even had rain fall on the concert while the bands were playing. This storm we watched while they were setting up. Cell phones were on the weather channels, tracking the storm. We thought it was going to miss us, but guess what! It didn’t. 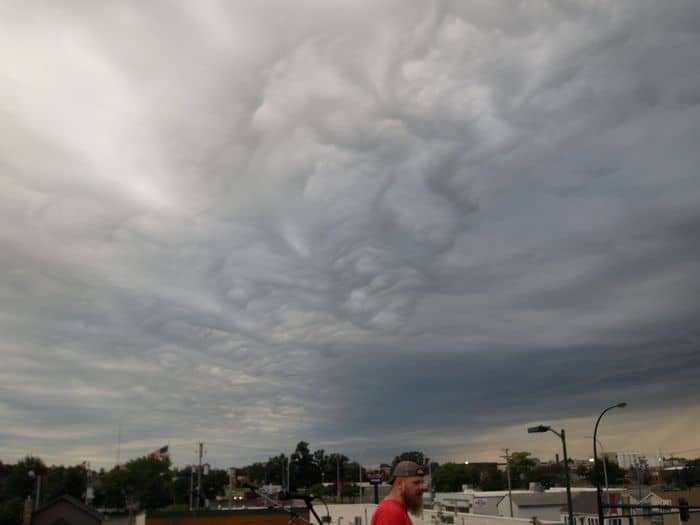 As you can see, Matt’s shirt was getting wet as he covered an amp head. The rest of the band members were doing the same thing while Biletnikoff provided the sweet music to the people where were watching them. After the rain, all was pretty wet. The drums caught my eye because when you hit the tom tom, water splattered all over the place.

The crowd was just starting to form while the band was playing a song so they could perform a sound check. They took refuge into their cars. Some stayed outside and braved the rain.

One song they played was RR Track. This is a song about leaving your partner. It’s hard to do, you want to do what is best, so you give up everything and only take the Wiskey Water as your sole comfort. Speak The Truth is another song they did. We do have video on this one.

Atom has a gift of both guitar and song writing. I’ve known him from the age of 13, it seemed he would always be on the guitar, playing song ideas and learning new riffs. 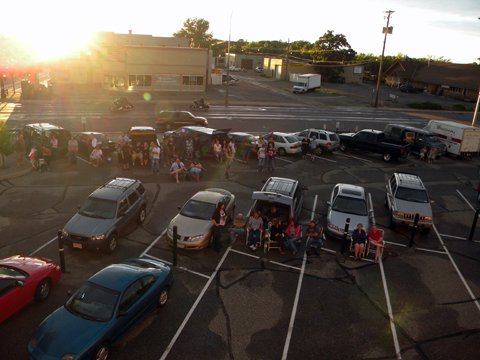 The concert ended at 10:00pm. In the video I made a pass through the parking lot, which shows how many people showed up. The people came and went throughout the concert.

The concert notification got out through facebook and word of mouth. People do enjoy the band. They came prepared, and tailgated. Heck, something different. Tailgate for baseball and football, why not for a band.

This year, there were other bands that played a few songs. They were Rejected Saint from Omaha, Nebraska and New Defective from Minnesota. I found the crowd interesting because they were the older folk who just sat around their cars to watch the show as well as younger people hanging out and standing far back for a good view to the roof.

Biletnikoff, thank you for putting on this last concert at the old movie theater. I know the people who attended will appreciate this as well.

Who knows, perhaps the new drugstore will want to do it again next year.