“The coal industry is detonating the explosive power of a Hiroshima bomb each and every week, shredding landscapes to bring coal wealth to a few, and leaving devastated communities in their wake. Politicians are siding with their corporate donors and leaving the people to stand alone” – Bill Haney, Director, The Last Mountain.

Mountain Top Removal is a system by which mountains are decapitated with explosives so they can be mined for coal. In the process of achieving their objectives Massey Energy have now destroyed five hundred mountains, decimated one million acres of forest and buried two thousand miles of streams. As a result, the inhabitants of Appalachia are forced to breathe in polluted air, drink radioactive water and sleep in toxic dust. This documentary tells the story of how these people have risen up to fight for the welfare of their families, their heritage and the future of America. They have been joined in their battle by Robert F. Kennedy Jr, whose commitment to their cause is unfaltering. 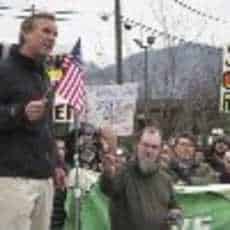 The hardships that these local people have had to endure are dire and, for most of us, unthinkable. They speak with dignity and sorrow and their sinister tales are each backed by cast-iron facts. One lady tells how six of her neighbors, who lived next to each other, all died from brain tumors. The national average is one in a hundred thousand, in Coal River Valley, West Virginia, the odds are stacked cruelly higher.

As with all big business, corruption is what allows Massey to continue blasting their way through the countryside. Between the years of 2000 and 2006 they committed more than 60,000 environmental violations but nothing was done until years later, when they were fined a total of $20 million, representing approximately one hour’s profit. This brush with the law obviously made the executives even cockier and they committed another 8,500 violations within months. They are, without doubt, the hooligans of Corporate America.

This documentary not only points a finger at the perpetrators of crime but does what few filmmakers manage – it gives answers, and it’s up to the people of America to listen to what they are being told. The world energy crisis can be solved without hardship, without destruction, and without anybody dying, but this will savage the obscene profits Big Coal is making, which is where the real problem lies. As all these execs will tell you, power corrupts, absolute power absolutely corrupts, but it’s an absolute blast. Literally.

To find out more please visit