A sensational kidnapping that once captivated a nation shouldn’t be that hard to recreate for the big screen but, in this case, it appears it is. High-octane drama is replaced by erratic action and whatever excitement was once created by this legendary abduction, got lost in translation.

‘Kidnapping Mr Heineken’ is based on journalist Peter R de Vrie’s account of a crime committed in the Netherlands in 1983. The Dutch brewery magnate, Freddy Heineken, and his chauffeur, Ab Doderer, were abducted by a team of five young men and held for a ransom of 35 million Dutch guilders (the equivalent of about 50 million dollars today). At that time, this was the largest global ransom demand that had ever been made and the Dutch nation became enthralled by the headlines that dominated their newspapers for three exhilarating weeks. 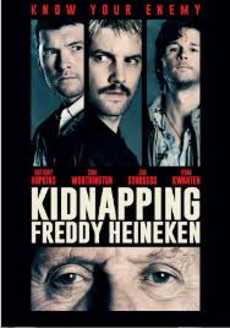 There are a lot of major decisions the kidnappers have to make, which is the moment when the hair-tearing should begin and we get to discover who is reckless, who is indecisive, who is cautious and who we do and don’t like. Unfortunately, however, these decisions never have to be made, as in the event, the gang leader simply makes a suggestion and the action goes onto auto-pilot. This gives the story a montage-like feel and is a good enough reason for the audience to disconnect.

A mainstay of this film genre is the relationship that develops between the perpetrator and the victim, but this never happens in the Heineken story. Not only does this leave a gaping hole, but it also denies the audience an opportunity to pick their side, which is what we are waiting to do. We want to be torn between wanting the aging Mr. Heineken to be sent safely home, and the fear that if these young men are caught, their lives will be destroyed before they even get started. But no one ever pleads their case and the result is indifference to the survival of the good, the bad and whoever else happens to be in the picture.

Due to an absence of, well, everything, there’s no escalating tension and no moments of hope and subsequent despair, but the final nail in the coffin is the absence of an explanation as to the eventual fate of the kidnappers. Everything just simply happens, so the audience is forever left to fathom the who, why, what and when for themselves. This is such a huge omission that I actually thought I’d missed something, but then some sub-titles appeared, which might as well have read “We have absolutely no idea how this crime was solved, but it’s such a cool story we decided to shoot it anyway.”

Yeah, right. Who needs an ending to a movie……..? Box-Office here we come.