This is the story of John Lennon’s life before and during his creation of The Quarrymen. It’s moving and compelling and tells us what John might have seen when he was dreaming of the past and, when he waxed lyrical, why he always managed to say so much with so little. The person behind the personality has finally been smoked out.

John is 15, smokes, drinks, bunks off school, likes reading Playboy and listening to music. He is being brought up by his aunt and uncle; the former is uptight, the latter rolls with the punches and John’s affection for him is clear. Tragedy strikes and John, already struggling with teenage angst, is suddenly confronted with the mother who abandoned him with he was five years old. 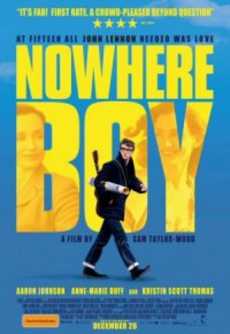 Nowhere Boy runs on the emotions of a family who were split asunder ten years before, and are now being torn again by the repercussions of those actions. As guilt, jealousy and resentment simmer, skeletons leap out of cupboards, John puts together his first band and the only ones who aren’t being press-ganged into joining are the skeletons.

All the Scouser accents are authentic with the exception of Kristin Scott Thomas, who sounds at first Welsh but then like a relative of the Queen. But 1950’s Liverpool is depicted flawlessly, and the gloriously real characters drive the story and keep it rolling from beginning to end. But there is one thing missing. The music. John does play, and a couple of times with Paul and George, but there’s no magic in the air and however impossible this would be to recreate, it should have got closer.

In the 70s, Lennon was one of the most influential people in the world, so influential in fact that Richard Nixon tried to deport him for an offence (possession of wacky backy, of course) he committed prior to his entry to America. With his peace songs adopted as anthems by the anti-Vietnam movement and his Bed-ins for Peace broadcast to nearly every country in the world, Tricky DIcky must have been sat on his couch, watching his TV, longing for those bygone days when musicians were only slightly above jugglers on the social scene. Imagine that.