This film is described as a comedy drama and, as the person sitting next to me laughed once, I’ll go along with the comedy but, as regards the latter, I’ve seen more drama in the late afternoon line at the local post office when a customer has given the only clerk on duty the paperwork for a passport. Now that is drama. (Note: although I didn’t join in the exchange I do agree that a specific officer should be responsible for passports but I don’t agree that just because a female clerk sticks up for herself and wears a shirt that she’s a lesbian)

Kevin Carson lives in the projects with his grandmother and works in a local shoe store. He’s just graduated from school but can’t afford to go to college. However, his luck changes when he decides, for the first time in his life, to buy a lottery ticket. His numbers come up and he’s the only winner of the $370 million prize but, when he goes to make his claim, the Lottery Office is closed for the holidays and he has to wait three days before he can claim his check. 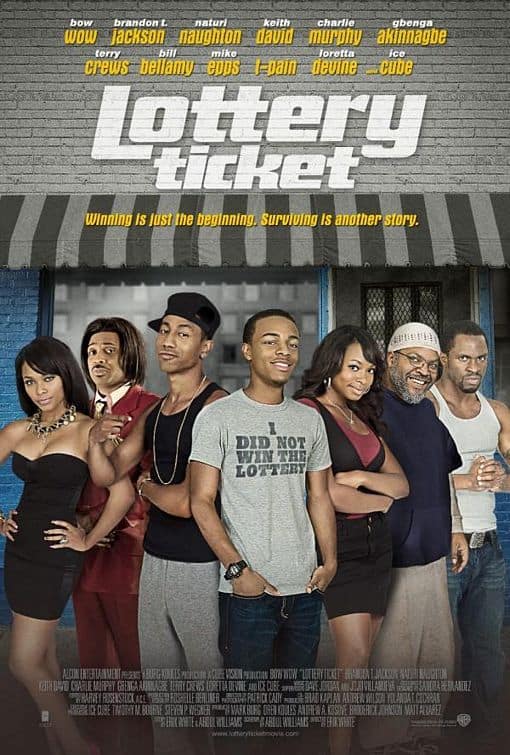 Kevin is a very nice guy. He’s unassuming, sweet to his grandmother, kind to strangers, polite to his colleagues and gets on well with his friends. So as a person, he’s most likeable, but as a lead character in a film, he sucks. And it gets worse. Kevin’s grandmother is loving and a domestic goddess, his best friend loyal and honest and his love interest a sensible young woman who never misses church on Sundays.

However, as we all know, money can make even the most beautiful people ugly, so we sit in our seats and wait for the good to stumble and expose, layer by layer, the flaws that poverty had hidden so well. But, disappointingly, this just doesn’t happen and all we get is a superficial story with the bad guys being as one dimensional as the good, all trundling through a series of events that tell us nothing that we don’t see on the screen which is, at best, tedious.

The idea of making a film about the three days before a winner picks up the lottery check is a great concept and the perfect setting on which to build tension. It was also an opportunity to pull us into the prospect of extreme wealth, and make us wonder if we would try for a slice of the pie, and expose ourselves to the world as frauds and make us wonder if, deep down, we could be shallow.