This is a story about two of the UK’s most notorious serial killers but, instead of sensationalism, the filmmakers feed us intimacy, and instead of gore we glimpse the mind of a man who tortured and murdered so many that he lost count. It’s compelling viewing and can be watched by even the most squeamish.

In 1992 Fred West filmed himself raping one of his daughters, the daughter told a friend at school and the friend’s mother went to the police, who subsequently opened an investigation. During their two year inquiry the police uncovered numerous human bones buried in the West’s house and garden and he and his wife, Rosemary, were subsequently charged with the murder of 11 young women, two of who were their own daughters. 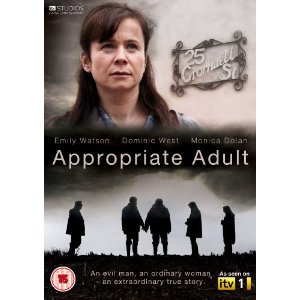 Janet Leach (Emily Watson) is training to be a social worker and asked to attend Fred West’s (Dominic West) police interviews as the ‘appropriate adult’. ‘Appropriate adults’ sit in with minors and the vulnerable in order to assist them and safeguard their rights; in this case the police wanted to make sure Fred West could never claim that he did not understand what was going on. It is Leath’s unique connection with West that takes us on our journey and which also gives this film such an emotionally charged point of view.

When Janet Leach makes her entrance, West sees her only as a new victim and, as soon as everyone is out of earshot, he whispers a confession in her ear. West knows she is bound by an obligation of confidentiality and, by making her his confidant, is giving himself power over the woman who has come to his aid. As West continues with his mind games, it becomes clear that Leach is no match for this master of manipulation, and he draws her further and further in until they become inextricably bound. By the time West is charged, he has created his own sideshow in the middle of a police station.

Once West is placed on remand, Leach’s job is officially over, and so should her story be, but it ‘s not, and we lose all sympathy for her as she continues on her treacherous path, no longer able to judge right from wrong and risking everything for someone she knows is made of nothing but evil. It is only when the film ends that we realize we have ourselves fallen prey to a greater power and all credit to Emily Watson for proving that she can be as manipulative as the smartest serial killer in town.