Appaloosa (R for violence and profanity) Viggo Mortensen and Ed Harris co-star in this Western about a couple of gunslingers hired to rescue a lawless desert town being terrorized by a renegade rancher (Jeremy Irons). 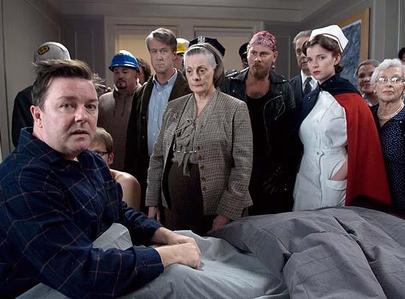 Ghost Town (PG-13 for sexuality, profanity and drug references) Romantic comedy starring Ricky Gervais as a nerdy dentist with the ability to see dead people who is pressured by a ghost (Greg Kinnear) to help sabotage his widow’s (Tea Leoni) impending remarriage.

Lakeview Terrace (PG-13 for sexuality, profanity, mature themes, violence and drug references) Psychological thriller with Samuel L. Jackson as an LAPD cop who decides to harass the newlyweds (Kerry Washington and Patrick Wilson) next-door because he disapproves of their interracial marriage.

My Best Friend’s Girl (R for nudity, graphic dialogue and pervasive profanity and sexuality) Romantic comedy about a just-dumped loser (Jason Biggs) who hires his best friend (Dane Cook) to date his ex (Kate Hudson) with the hope that she’ll wise-up and realize what a big mistake she made. Cast includes Alec Baldwin and Lizzy Caplan.

All of Us (Unrated) AIDS documentary chronicles the efforts of Ethiopia-born Mehret Mandefro, a young, Harvard-trained M.D., to determine why her black female patients in the South Bronx are becoming infected with HIV at an alarming rate.

Action thriller, set in Rio de Janeiro in 1997, revolving around a couple of idealistic police recruits (Caio Jungueira and Andre Remiro) assigned to rid a dangerous slum of drug dealers prior to the Pope’s impending visit. (In Portuguese with subtitles)

Hounddog (R for sexuality and the rape of a young girl) Dysfunctional family drama, set in rural Alabama in the late Fifties, revolving around a young girl (Dakota Fanning) whose obsession with Elvis Presley serves as an avenue of emotional escape from an abusive home life shared with an incapacitated father (Daddy Morse) and a strict, religious grandmother (Piper Laurie). With Robin Wright Penn, Afemo Omilami and Jill Scott as Big Mama Thornton.

Quilombo Country (Unrated) Historical documentary, narrated by Public Enemy’s Chuck D, examines the creation of communities by runaway slaves in Brazil and the continued discrimination in the country along color and class lines.

Virtual JFK: Vietnam if Kennedy Had Lived (Unrated) Via the magic of archival footage, this quasi-documentary by first-time director Koji Masutani speculates about the direction that America’s foreign policy would have taken in terms of Southeast Asia, had President Kennedy not been assassinated.

Streets of Syndicate, Ohio – Out August 11

Quentin Tarantino Gives Details About “Once Upon a Time in Hollywood”

NYIP Inc, Pete Allman Announce Gabriel Tang to Star With Damian Chapa In The Outside Call