If the classic western genre is more about talking hot topic issues today than anything else, then Appaloosa may be said to be less about macho oneupmanship than homoerotic guy bonding in collision with lady lust. Ed Harris reunites with his History Of Violence co-star Viggo Mortensen and directs Appaloosa, as they horse around – no pun intended – while earnestly going about righting all wrongs in the arid jungle atmosphere of the Wild West.

Based on the pulp western novel written by Robert B. Parker, Apaloosa, like last year’s spurs ‘n saddles saga, The Assassination of Jesse James by the Coward Robert Ford, is a conventional narrative more distinguished by inspired language, the latter in its luminous poetic flights, and Appaloosa with its crackling idiosyncratic verbal wit. And whether Appaloosa’s eccentric dialogue is authentic to the times or not is beside the point. It sure sounds like the way cowboys actually spoke back then, a rare component of Hollywood westerns. And so this review will bear some telltale evidence of that salty talk, as we proceed. 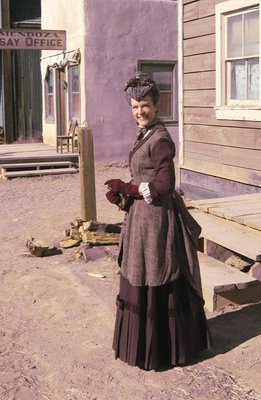 Set in 1882 in the Old West territory that now comprises New Mexico, the movie centers around a small town that has been taken over by rampaging outlaws who might be termed terrorists today. Ed Harris is Virgil, an alienated Civil War vet who shows up in search of ‘gun work’ and a little ‘expansion of the soul,’ while aiming to ‘button up this town tighter than a nun’s corset.’ Not to mention that it certainly beats soldiering. Teaming up with Hitch (Viggo Mortensen), as marshal and deputy respectively, the two butt heads with formidable, cantankerous villain Bragg (Jeremy Irons), the head of the presiding bad guys, with uneven results.

And turning up to toss some complications into the mix is Widow French (Rene Zellweger), a flirty drifter poised to make a play for whichever man around is willing to succumb to her charms, and yearning for male protection in a dangerous world. Having an unusually hard time telling the difference between the widow – until she sets him straight – and local hookers because those are the only women he’s been around, Virgil surrenders to her overtures. Though mainly because she ‘chews her food nice, and even takes a bath before going to bed.’ However, much to the eventual dismay of Hitch, who is not amenable to this suspect wilderness femme fatale coming between them, as he wisely senses trouble to follow along the way.

There are numerous surprise jolts of injected postmodern comic banter intertwined with episodes of savage sagebrush gang warfare; lots of impromptu frontier justice; lurking conspiratorial economic developers in suits; and scary cowpoke mob mentality hellraisers. In addtion to aspiring intellectual lawman Virgil, who on his down time ‘while the bees are in the butter,’ struggles with mastering the dictionary along with the poetry of Emerson.

Appaloosa is more fascinating character study than cowboy adventure, though at times as awkwardly crafted as these thwarted gents with questionable, clumsy social graces, to say the least. In any case, the movie is a welcome, amusingly subversive addition to the annals of the traditional Hollywood western.