Not just another royal goddess in a gilded cage period costume drama, The Duchess couldn’t be a more perfect matchup for today, when women with the audacity to bid for the highest political offices in the land are dismissively told to go home and take care of their kids or iron male shirts. And combining the best of both cinematic worlds, The Duchess palpitates with a compelling personal story that rarely strays from the incendiary politics of the era.

Directed by Saul Dibb (Bullet Boy) and based on the award winning Amanda Foreman biography, Georgiana: Duchess Of Devonshire, the film delves into the rebellious, tragic life of the brainy, gambling, hard drinking high-born Georgiana Spencer, who in the late 18th century entered into an arranged marriage as a sixteen year old to middle aged grouch, William Cavendish, 5th Duke of Devonshire. The blatant purpose of this cold, contractual matrimony was to produce a male heir of aristocratic blood for the incorrigible womanizer, much to Georgiana’s dismay, a union embodying about as much passion as horse breeding. 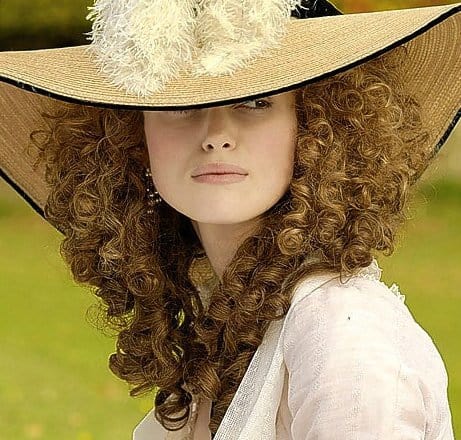 The movie has also sparked a great deal of curiosity because Georgiana happens to be an ancestor of the late Princess Diana Spencer, and their doomed marriages do bear some similarity. But gossip junkie alert, this is Georgiana’s story. And it stands quite on its own as a luminous portrait of a strong-willed female, who adamantly refused to accept that the impetus to liberty during a period of revolutionary upheaval on the planet and any declaration of the rights of man meant just that, and in no way included women.

Keira Knightley is stunning in the role of the duchess, a free spirited young woman born into the period of twin revolutions in France and America, along with the Enlightenment in England, but who quickly learns that any of this liberation talk is strictly off limits for females. Informed that her highest duty as a proper lady is resignation along with producing male children, Georgiana is subjected to an abusive, loveless marriage with numerous lovers sneaking into her marriage bed when she’s not around, mandatory duty as surrogate mother to the duke’s illegitimate child, and worst of all in the eyes of society, a mother in her own right who seems incapable of producing anything other than female offspring.

A mistreated outcast in her own luxurious home, Georgiana flexes her creative impulses in the only artistic endeavor allowed women back then – fashion. And in the spirit of the new sense of freedom in the air, she follows the lead of her errant spouse by doing the unthinkable – taking her own lover too. Namely, Charles Grey (Dominic Cooper), who would later become Prime Minister after consenting to shun this high society sexual subversive in petticoats.

The Duchess shines with its own unique radiance by avoiding the major pitfalls of such drawing room dramas. That is, by not making the mistake of subjecting the audience to a stuffy, hermetic oppression similar to what the characters are experiencing. And doing so by flinging open the windows of those elegant, airless confines, broadening the scope of the story, and allowing history in, however just beyond tantalizing reach. As such, the film illuminates, not just the lives of these characters, but the agony and ecstasy of those tempestuous times.