Never one to shy away from controversial characters, Samuel L. Jackson has been taking it on the chin in some circles, for the interracial mating thriller, Lakeview Terrace. Jackson plays Abel, a cop who goes ballistic when a racially mixed couple moves in next door. But his reactions to the off screen firestorm over this Neil LaBute tempest may surprise you, for he sees it as being less about black and white, than blue. Jackson was in town along with cast members Kerry Washington and Patrick Wilson to talk about Lakeview Terrace. And the formidable actor who can terrify you one minute and be wildly funny the next, also shared memories of his two most recent co-stars who just passed away, Bernie Mac and Isaac Hayes. 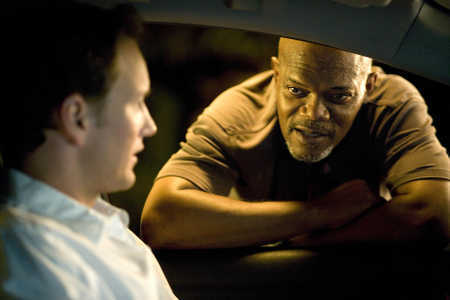 Is it hard to come down from playing such scary characters like this one?

SAMUEL L. JACKSON: They stay at work. They don’t hang out with me!

Have you ever had any of your own experiences with neighbors from hell?

SJ: Not really. I live in New York! But there were teenagers who would come out and sit on our steps when we bought a house. So once we got tired of the boom box noise and the chicken bones, whatever, we got gates to put in front of the steps. So all of a sudden, we were the neighbors from hell!

Wait, gates on the steps?

SJ: Yeah, they were our steps, so we locked ’em. It was either that, or pick up debris and chicken bones. And they sat on the steps till three in the morning, playing these boom boxes. Like when everybody had those big radios.

The way Lakeview Terrace plays out, do you think there’s still a taboo on interracial marriages?

SJ: I don’t think there’s a taboo. But everybody’s got an opinion on something. And some people don’t care, and some people do. I know it’s weird to hear it, but it happens.

I know my wife’s friends, who are educated and attractive, they’ll see a brother with a white woman that’s not as attractive or not as well off. And they’ll go, why her and not me?

And there are a lot of unspoken attitudes about things like that. You know, that people look and go, I wonder why they got together. So yeah, everybody’s got an opinion.

Do you think this movie could be seen as racist?

SJ: Hey, it’s just one guy’s opinion. The way Abel thinks, is how he’s informed being a street cop, and the kinds of people he deals with on a daily basis. So he doesn’t think that much of his fellow man. And when that couple moves in, they threaten the way he thinks about his way of life.

And it’s not just that they’re black and white. They’re also liberal and free thinking. And he doesn’t want his daughter involved with this free thinking woman next door.

And they could have diffused the situation as much as he could. His community security light is shining in your room, buy some curtains, you know? Blackout curtains, like people do in California.

And when they have that party, all of a sudden it becomes a class thing. Because they’re all educated and think they’re better. They kinda talk down to him.

So hopefully I was trying to craft this character, and yeah, he’s a hardliner. And he feels his wife died in a hospital in a white part of town – where he wonders what she was doing there with a white man – and that she was allowed to die on a gurney because she was black. He has some definite feelings about that.

But I wanted to also show about him at times, that there’s a human being in there. And that he’s trying to do something positive with his life. And sometimes he’s right. Which can make you feel kinda creepy, if you agree with him about some things.

Well I didn’t feel bad for him at all.

SJ: I would never know that by the way you’re saying it! He did cross a line. But there comes a time when you cross a line, you can’t go back over it. And when he feels threatened, he goes berserk.

But acting is acting. I treat all my characters the same way. They’re just people. And you always try to find an honest and human way to approach a character, and give that to an audience. And so it allows them to engage, and not disengage.

So I just figured out a biography for Abel. And like who he was, and where he came from. And his attitude about people is informed by what he does as a cop, from day to day.

And because you’re a cop, you have a sense of authority, and know how to use intimidation as a tool. And sometimes when intimidation doesn’t work, you move on to force. And we can see that Abel’s not averse to doing any of those things.

So do you think the LAPD gets a bad rap?

SJ:…No! Ask yourself this question. How many police departments do you know who shoot through a baby to get the bad guy!

Do your fans come up to you because they mostly like the bad guys you’ve played?

SJ: Not necessarily. There are those legions of Star Wars fans. And there are older black people, who really loved A Time To Kill. So I kind of move through a lot of different fan bases.

Can we expect more films like this from you?

SJ: No! I read what comes across my desk. I like acting. Actors act, you know? It’s not a plan. And the next movie I have coming out, is Soul Men, that I did with Bernie Mac in Shreveport.

What are you memories of your two co-stars who just passed away, Bernie and Isaac Hayes?

SJ: Well, I knew both of them as friends before I started working with them. The only time I worked with Bernie and Isaac, was this next film. So I knew them as just, you know, guys. And as really great human beings.

Like I would have conversations with Isaac and his friends, about what they did when they were young men, just writing songs. But they were just great guys, who happened to be performers. And like me, what they did was part of their driving force.

You know, there were these microphones. And Bernie never met a microphone he didn’t like! So when he would hear, ‘Cut’, Bernie stayed on, and would entertain the cast and the crew. And he’s great in the movie, he’s hilarious.

So it was a wonderful and lively, and fun set. And I think the movie will be a great tribute to the Bernie Mac that everybody met and loves, and cared about.

Are you mulling any more stage work?

SJ: Nah. It’s hard to buy gas for my Mercedes on a theater salary!

What about your wife’s work now on Broadway?

Okay, so when was the first time you fell in love?

How old were you?

SJ: I don’t know, Five or six. She was so cute. But she never gave me any candy!

How do you feel about being one of the highest paid actors around?

SJ: It’s not my fault! All it means is that I’ve been fortunate enough to be in a couple of films that made a lot of money. Most of them called Star Wars!