In a world of so many diversified restaurants in Los Angeles, there is one restaurant that incorporates art with many different cuisines from around the globe, yet keeping a family atmosphere. Doma Kitchen, meaning “home” in slavic language, is just that place.

Angie Corrente and her husband Stan Mayzlas have a successful career in the corporate world. Angie who moved to L.A. in 1979, seeking a career as a fashion designer graduated from Otis-Parsons. She was employed by Guest and Levis as a denim specialist.

Stan, an excellent chef, is a builder and general contractor. He and wife Angie opened their first restaurant in Redondo Beach for 2 years, then opened their second restaurant in Manhattan Beach, finally settling in Marina Del Rey.

Doma Kitchen is a homey restaurant with recipes that are influenced from Ukraine, Belgium, South Italy, Central Asia, and Lithuania. Their foods are fused with a healthy modern American touch. With that creativity, the Executive Chef, Kvistina Miksyte and her mother Natalia prepare all dishes from scratch, using locally sourced vegetables which are organic.

The contemporary setting has hand-made tables built from surplus wooden frames, with the work of local artists displayed throughout the restaurant in an all-white wall setting. It is no wonder that the design of the restaurant, and the combination of cultures in preparing succulent cuisine, brings a multicultural exchange through food, art and music.

My guests on this occasion included Alex Ayzin, the creator of “Winds of Freedom,” a documentary promoting global peace and harmony among nations, Yin Jiang, a concert violinist with Andrea Bocelli, Tom Hallick, the former star of “The Young and Restless,” Angie Corrente, the owner of Doma Kitchen, and Pete Allman, journalist, film producer, who is promoting peace as President Donald Trump. 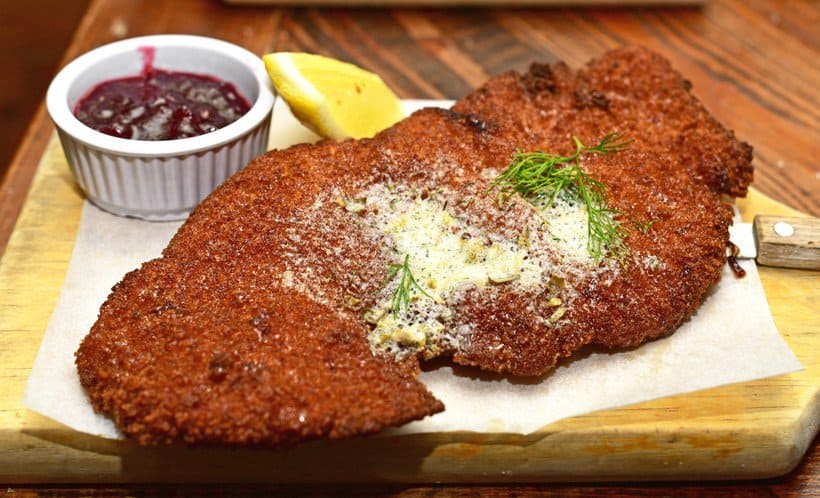 All the dishes were delightful. Tom Hallick said, “this is the best cuisine, served in a home type atmosphere that would be very expensive in a high end restaurant.” Alex Ayzin loved the Potato Dumplings, and the Schnitzel, and Yin Jiang said the Potato Dumplings and the Crunchy Bavarian Bread were among her favorites.

During the conversations we saluted with Grey Goose vodka, which Alex Ayzin brought to dinner in celebration of his father who just passed. The shots were taken with pickles.

There are many typical desserts that we have all enjoyed from time to time but the homemade deserts at Doma Kitchen are prepared with creativity and lots of love. We all enjoyed the 8 Layer Honey Russian Honey Cake, prepared with sour cream and honey. There is also the Cake In A Jar 9, prepared with house made chocolate cake, seasonal berries, chocolate and raspberry sauce, and whipped cream. Certainly a great way to end the evening of dining.