Indian cuisine has been quite popular in London, as well as throughout the United States. Tamarind of London, which has been in business for 35 years, brought their famed restaurant to Newport Cove, a mile north of Laguna Beach, California, just three years ago. In doing so, they consulted with Imran Ali, who formerly owned his own restaurant in Silverlake, about bringing his expertise to their company.

Chef Ali, as he is referred to, is somewhat of a “New wave” chef, in that he believes in adding spices to his dishes, to bring out the aromatic flavors of each dish. “It was about 12 years ago, after graduating with a Bachelor of Arts in Computer Science, that I returned to my art of combining spices into the variety of dishes that I prepare,” he says. He does that so passionately, that Zagat has named Tamarind one of the top Indian restaurants in the United States, as well as The Los Angeles Times rating them number one in Southern California. It was this writer’s pleasure to meet Stephanie Rocha, the restaurant controller and Christian Magnusen, the shift supervisor, who gave me a tour of Tamarind of London, and introducing me to Executive Chef Imran Ali.

During the tour one could discover two areas for dining, one in a contemporary elegant setting and the other in a patio area, which overlooks the fire pits. I sat in the patio area, where there were warm heaters above the tables and may I add, beautiful oak wood tables.

The selection of cuisine was outstanding on this Wednesday evening. The appetizers selected were the Quinoa Salad, which is prepared with avocado, beets, radicchio and cilantro, in an orange-Coriander dressing and the Mulaim Rattan/Seared Sea Scallops, which were pan-seared spiced scallops prepared with a warm masala cauliflower puree. These two dishes set the stage for the two main entrees, the Kashmiri Lamb Roganjosh/ Classic Lamb Curry and the Baingan Ka Salan/ Baby Eggplant Curry. 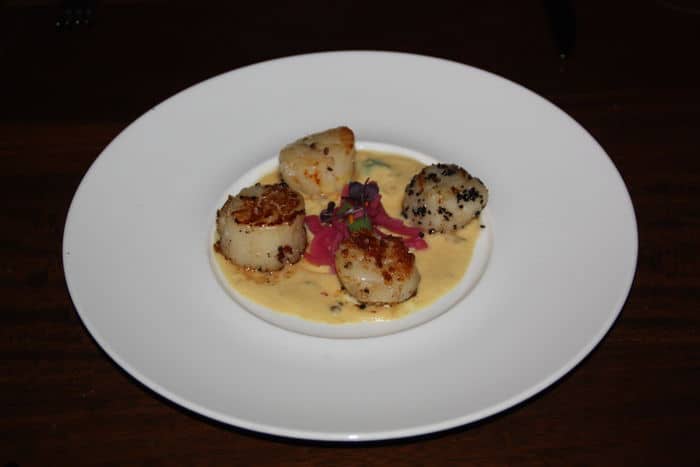 The first entree is widely recognized by connoisseurs of lamb dishes. The Australian Lamb is slow cooked with browned onions and Kashmiri red Chilis. The Baingan Ka Salan/ Baby Eggplant Curry is prepared with Indian Baby Eggplant with Moilee Curry Sauce and Indian Risotto. What makes both of these dishes so delightful is not only the way Chef Imran Ali prepares his cuisine, but the exotic spices he uses. “The spices bring out the flavors of the food, he says.”

Chef Ali knows this from long experience, in that he has experimented with spices from India for years. The majority of Indian Restaurants tend to use about five spices in preparing their foods, while chef Ali has 50 spices to choose from. Chef Ali makes sure his staff use his recipes to exact specifications on every dish. With this kind of quality comes purchasing the best available produce, meats and seafoods available from local farmers and vendors.

While subtle music played in the background, Chef Ali spoke to me about his communication with the chefs in London and the popular desserts patrons rave about. His success stems from organization and proper planning with all the chefs and his knowledge of combining the right amount of spices in his dishes. Talking about chefs and desserts, Chef Ali had Chef Mark Madina, their pastry chef, speak to me about preparing a scrumptious dessert. Chef Mark created a triple chocolate torte with an essence of coffee and chocolate ganache, dark chocolate mousse with red curry ice cream. The second dessert consisted of Mango Kulfi, Such love and passion, in preparing these deserts and Northern Indian cuisine is a heaven’s delight for a romantic evening for dinner. 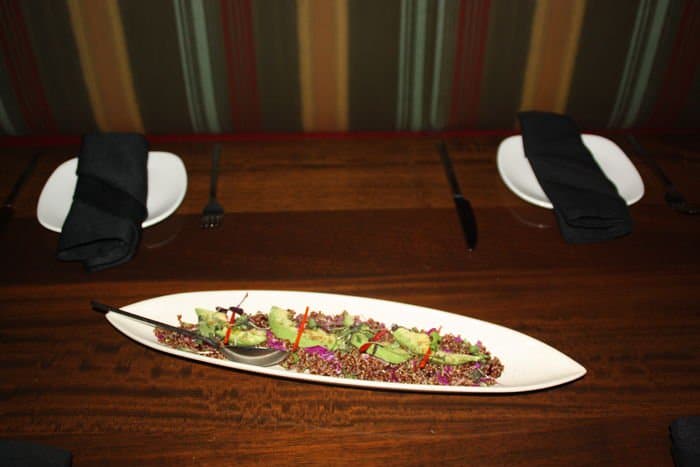 Before our dining journey came to an end, I was given a tour of the kitchen. For all practical purposes, it was spotless. It was also explained how the chefs cooked the various foods on skewers in the tandoori ovens, where chefs can be seen cooking by the public through the glass display. The Tandoori ovens burn at 450 degrees for the Naan breads and the other Tandoori ovens burn at 800-900 degrees for the meats and seafoods. I was also shown the many different wines from all over the world in the wine display cooler. In fact, the menu suggest which wines to enjoy with the different dishes.

Tamarind of London is located at 7862 Pacific Coast Highway, about one mile north of Laguna Beach in Newport Cove, California 92657.For reservations call (949) 715-8338. Celebrity Scene News awards 5 stars to Tamarind of London.