On having contributed a portrait of Bela Lugosi as Count Dracula, to his families Official Website, Ghost Hunter Artist Glenn James considers the actors impact on the role of Stokers great vampire….

In the documentary “The Making of Francis Ford Coppola’s Dracula,” a thoughtful Gary Oldman remarks “I think Bela Lugosi was onto something…” when he is trying to explain how he got into the role of the Count.

A daunting task for any actor, as while they are even contemplating what kind of fangs to wear, they will be more than conscious of two almost biblical shadows dominating the landscape.

For those more inclined to the hard Gothic approach, there is of course the formidable ghost of Max Schreck’s flesh-creeping Count Orlock, in F. W Murnau’s unofficial 1922 adaptation of Dracula, “Nosferatu.”

Then, as the great demonic lover, long before Frank Langalla was even a twinkle in his mother’s eye, there was the greatest interpretation of them all. Immaculate in his evening dress and flowing cloak, Bela Lugosi, in the 1931 film by Todd Browning. 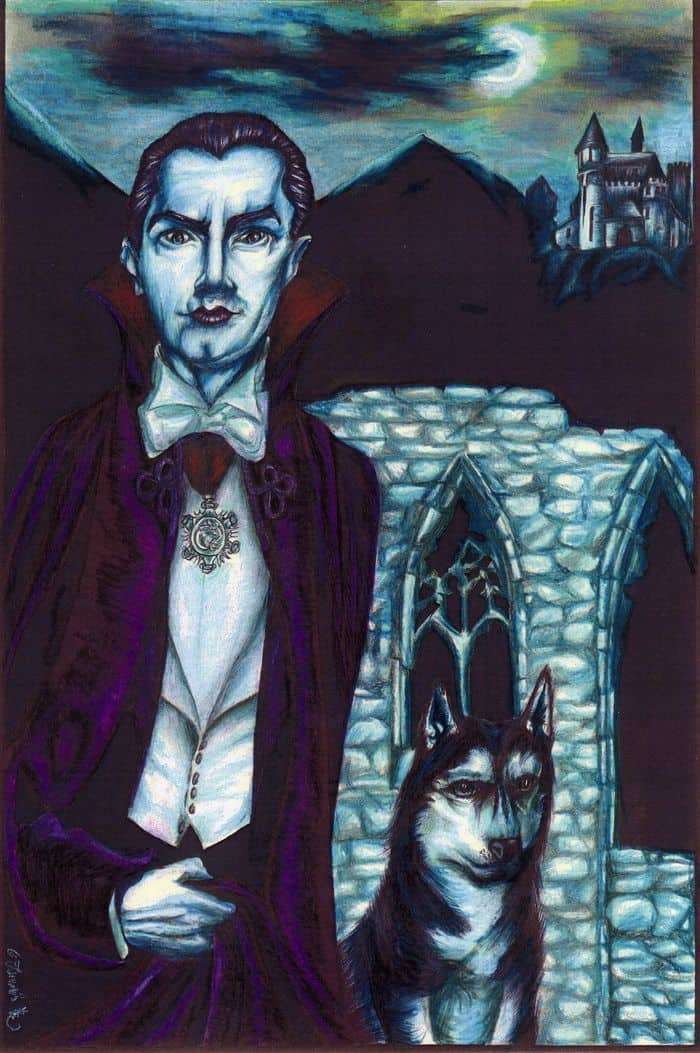 Lugosi’s Count broke the mould, there is no other way of putting it, establishing in one black and white movie an image which is absolutely iconic, in the way that his great rival Karloff was to shortly to do in “Frankenstein.” Lugosi’s screen presence in the part was so hauntingly arresting that he was made captive by the character, whether he liked it or not, (and there is a formidable body of evidence to say that he wasn’t happy about it), but which sealed his screen immortality.

Because “Nosferatu” came first, and had such a huge effect on the cinema in the years which followed, we are inclined to consider the rat like Orlock as the great screen vampire who really kicked things off. No disrespect to “Nosferatu,” but this is doing a great dis-service to Lugosi’s film, and underestimating its cinematic legacy.

The classic description of Count Dracula is of course that of an old Vlad the Impaler, Stokers “military Commander,” with receding hair, a long white moustache, and fierce eyes. Todd Browning’s film completely went off in a totally new direction. Bela had become a sensation playing Dracula in the United States in the form of the “Latin-Lover” of the period; the Valentino influenced, suave and dangerous charmer, with slicked back hair and immaculate clothes.

This had had gone down a storm with 1920’s audiences, even more so than the barnstorming efforts of Hamilton Dean, who had popularised the stage adaptation of Stokers novel from play by John Balderstone. Bela was touring with the production between 1927 and 1929, playing the Count on Broadway to unprecedented success and being inundated with very saucy fan mail from female members of his audience.

We should all be so lucky! Universal deliberately played on this approach, encouraging the otherworldly feel of the romance. Lugosi’s film credits open with the theme of “The Dying Swan” from “Swan Lake,” and the film itself opened on Valentines Day 1931. These are aspects which are perhaps overlooked in these hedonistic days, and slightly overshadowed by Frank Langalla’s seductively Byronic approach in the late 1970’s.

On Broadway, Bela was a sensation in the role, and despite this fact, rather astoundingly to modern eyes, when Universal came to make a film of Dracula they were a little slow off the mark to capitalise on this unprecedented stage success. Lugosi was a couple of names down the list of their intended choices, and subsequently followed in the hallowed footsteps of Lon Chaney; The great silent horror star had long expected to play Dracula in a film directed by Browning (as the two went back a long way and had an established track record of screen successes together), but Chaney died of cancer before the movie could begin filming.

And so Bela landed the role. Something which should be remembered as a vital point about this is that the success of Universals first “Dracula” kick-started the first great Horror cycle in cinema. Without the success of that film it is unlikely that we would have seen much of what was to follow, and would almost certainly not have had “Frankenstein” shortly afterwards.

Bela is haunting. At times his Count is strangely distracted, even slightly catatonic in repose, something which gives him a dislocated air from everything around him, (which is only to be expected if you are 500 years old!) His welcome to Renfield, and bonhomie to Van Helsings circle later in the film, seems warm enough, but you can see his mind racing behind his eyes, carefully pulling his schemes slowly together. His exotic Magyar intonatation is fascinating and compelling, and should quietly be considered a great triumph on the part of a 20th Century film artist, as Bela was still struggling to learn English, and performed his lines phonetically. Imagine that in a mainstream movie nowadays!

When he is first seen, having risen from his coffin out of shot, Lugosi is stock-still and it’s a quite an introduction. His cloak is thrown raffishy over his shoulder, and the light from a tiny inky-dink spot is highlighting those rather hypnotic eyes. The film has no sound score, and he says nothing personally, but this is the first of many great iconic screen moments in the film. In his appearance at the top of the great dilapidated staircase carrying a candle, to welcome Renfield, and then later through the French windows, to stop his Brides chowing down on the poor little guy, he is seldom less than a dominating screen presence.

Maybe part of it is that wonderful flowing cloak. Perhaps it’s the subtly of the film, as of course in those days it was impossible to show someone going for the jugular with fangs bared. Then there are the discrete fades where, female victim wrapped firmly to his chest, the cloak flows up over their faces to hide any suggestion of a kiss.

This happens to Mina Harker late at night, and in the following morning she is (ahem!) transformed, and seems terribly satisfied….

The movie was such a huge success that the image of Dracula followed Lugosi throughout his career. This tragic story is well documented, and it should perhaps be remembered that the actor tried valiantly to break out of this typecasting, and more than once succeeded admirably. But the celluloid ghost of his performance had become a legend, and the image of Dracula as a suave aristocrat, with a swept back widows-peak and flowing opera cloak was so dominate visually that it became an inescapable part of Christopher Lee’s mantle in the later Hammer movies… And Lee famously struggled just as hard to shrug it off.

There have been other Draculas. Jack Palance gave a game performance in the 1970’s, as did Frank Langalla in the later Universal release. Each has something interesting and of merit to bring to the legend, but it was not until the early 1990’s that Gary Oldman (in a barnstorming, operatic adaptation) managed to shrug off the cloak.

This is the version of my generation. I was very much a Goth when a student, and to me “Dracula” is Gary Oldman, as the film came out when I was at University. (So did the “Addams Family” movies, boy were we spoilt!) I really loved this film, mainly because I wanted to dress like Gary Oldmans younger Prince Vlad, but largely because I was head over heels in love with Winona Ryder!

Coppola’s film is my version personally, so to speak, when I was in my early 20’s, but speaking as a student of the genre the great screen image of Count Dracula is indisputably that of Bela Lugosi.

His contribution to the legend of Dracula is inaccessibly hard to value, and came at great personal cost to a versatile Shakespearian actor, but his cinematic legacy is now part of our Horror Pantheon. And whenever you decide to sit down in a darkened room to watch the movie again, and that striking face with its piercing eyes comes into view in the crypt of his castle, always remember,” There Are Such Things.”