If there’s one thing that could actually be scarier than being in a scary movie like The Strangers, according to Liv Tyler, it’s sitting down for an interview with nosy reporters. But Liv braved this press interrogation with lots of humor and heart, perhaps having picked up some pointers while warding off those masked maniacs in The Strangers. She also dropped hints about what may be new and different about the new Hulk and her very collaborative starring appearance. But no, this Hulk is in no way a pink one.

No worries, this will be gentle.

LT: This is more terrifying than…this movie was! 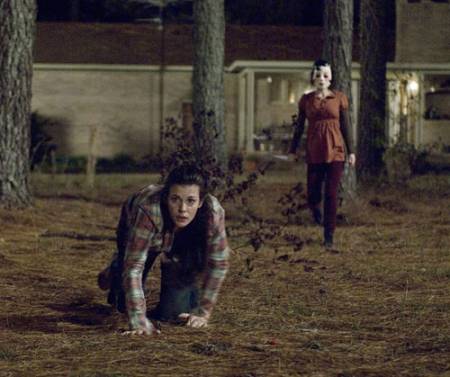 So did you get into a scary mood for The Strangers by watching any other horror movies?

LT: Yeah. I’m trying to think, the things that I watched…I watched Rosemary’s Baby. And Halloween. And then this weird, dodgy movie. They get kidnapped and taken to the country, and they’re like naked.

What was up with that?

LT: Never mind! But when I was a kid, I was pretty obsessed with horror movies. It was my favorite thing. I remember watching Texas Chainsaw Massacre for the first time and I was like, okay. I’m done with horror movies!

LT: It really scared me, so much.

Was doing The Strangers a case of, like I’ve really achieved a lot, so now I can be in a slasher movie?

LT: Hey, this is really a drama. It’s a story about a couple going through a not so perfect situation. And they just so happen to…be happened upon! You know, by these people. Very bad people! I just did this TV interview, where I had to say, I’m Liv Tyler, and I just did this movie about three very bad people!

Did you draw on any of your own experiences to play this unhappy woman?

LT: That’s too personal to talk about, because it’s a little bit terribly sad. But there’s another story, about my stepfather, Todd Rundgren. We used to live in Woodstock. And two people broke into his house there in the 1970s. And they tied up him and his girlfriend – who was pregnant with my brother Rex at the time – to a chair.

They were held at gunpoint. And I think one of them pistol-whipped Todd, which was horrible. And I don’t remember what they did. There was nothing really stolen, and there was no real reason. You know, it wasn’t necessarily like a crime of passion.

But things like this happen a lot, you know? And often they are very random. And sometimes there are family members.

Have you seen the finished movie yet?

Did the director ever drive you to the point where you felt like you were personally losing it, from all the fright?

LT: He would see us so upset, and so disturbed. And he didn’t like want to get involved. He kinda just created us, and then stood back and watched, you know what I mean?

And he made it clear that it was not to be campy, in any way. He wanted it very real and bleak, and absolutely terrifying.

What’s it like being in a movie where your salary is most of the budget?

LT: God, that’s so not true! Are you serious?

That’s what the director may have said.

LT: Well, that’s a huge lie. So what else do you want to know?

It may be a predictable question.

LT: We don’t really care. It’s not about that. It’s about, it’s an amazing, wild, wacky collaboration of a bunch of gypsies, making a movie. And no matter how big, or small. Like I just did The Hulk, and it’s the same thing.

You know, there was a lot more stuff to blow up, and to take time doing it. But the catering wasn’t any better! Well, we were in Toronto. Just kidding! But it’s the same experience. So to me, I just always feel like it’s the same, no matter how big or small.

But you must have less personal input into a blockbuster.

LT: I actually had a lot of input in The Hulk too. The Hulk is pink! But no, I don’t mean to be cocky about it. It’s a collaboration. But The Strangers was really a small, intimate experience, and very emotional for all of us.

Like there wasn’t literally one light day. You know, my poor hair and makeup people would see me and have tears in their eyes. Or were in like shock. It was, you know, not so pretty.

Did you go back and see what Jennifer Connelly did in the original, for pointers?

LT: Yeah! I’m Betty Ross. I did go back and watch the television show. It used to be one of my favorite things, that my mom and I would watch all the time.

And what will you be doing in The Hulk, that’s new and different?

LT: The story is completely different, there’s nothing similar. Or even really, about the characters, in a lot of ways. And I would say there’s the essence of, you know, that image of the lone figure, of Bruce Banner walking down the street alone with his little backpack.

And, you know, hitchhiking. And the misunderstood hero having to move on to another town kind of thing. That was more of the overall feeling for the film. But the story is completely different.

So what do you bring to the relationship of Betty and Bruce in this movie?

LT: Well, I didn’t write the screenplay! Edward Norton did. But I was offered the part before I ever read the script. And he wrote a really great part for me. I’m a scientist. Which, um, I know is unbelievable! But I get to have a lot of good things to do. So I’m very excited about it, yeah.

Any truth to the rumors of friction with Norton?

LT: No, it was a great collaboration for all of us. And any misunderstandings, just happened in the editing. Edward did release a statement talking about it, and I can’t speak for them.

But at a certain point, Marvel just decided to put together and edit the movie that they wanted to do. And Edward disagreed with them. But I can’t speak for them. And it’s really not a big deal.

You know, it’s the same movie. There’s nothing crazily different about it. So, I’m not really sure why all that happened, to be honest.

Nothing different, except that Hulk is pink!

LT: Except that he’s pink. Yeah!

Did you ever feel truly scared during the filming of The Strangers?

LT: Oh yeah. I mean, all the time. Absolutely. That’s what is so real about The Strangers. Like you’d be in bed at night trying to relax, and all of a sudden you hear a noise and you go, what was that!

And you wonder, are you brave enough to go check or not. Imagine if you went to look, and there’s a person in a mask standing in your living room, with a butcher knife!

So what’s up next for you, and what do you want to do in this business that you haven’t done yet?

So say a little more about your singing.

LT: What do you wanna know?

Like do you see yourself performing in Madison Square Garden, or where?

LT: I think I like the old Hollywood idea, of like singing and dancing. There’s something so theatrical and fabulous about that. But I actually just recorded a song with my friend, Evan Dando. Though I don’t know if it will ever come out!

Evan asked me to sing a Leonard Cohen song, called Hey, That’s No Way To Say Goodbye. It’s really beautiful. But I don’t know, it was just a fun thing. You know, I have a very musical family, and I enjoy music a lot. So…

And I also did a movie called Smother, with Diane Keaton. I don’t know if it is ever going to be released. But I think it was released in Taiwan, a couple of weeks ago!

It’s actually really funny, so I don’t know why it isn’t being released. It’s just a sweet kinda romantic comedy about a mother and son. And I play his wife.

So I worked all year, I just did these three movies in a row. And I finished The Hulk in November. Then I took a little break, because I was a little bit exhausted! And now I’m just…excited to see what happens next!

Now that you’ve whetted your appetite, would you do horror again?

LT: Of course! I would be thrilled to have this experience, equally if not better, again. But life doesn’t work that way. Hopefully you just get to choose things that you feel passionately about.