Phillip Roth’s “American Pastoral” was published in 1997, and won the Pulitzer Prize in 1998. The story shows the full swing of the social pendulum in the United States, from the Post World War II era, when Americans were wholesome and optimistic, to the Vietnam War protests of the late 1960s and early 1970s. The narrator, Nathan Zuckerman, only appears at the beginning and end of the book. The subject of the book is “Swede” Lavov, Nathan Zuckerman’s childhood idol, whom he introduces:

During the war years, when I was still a grade school boy, this was a magical name in our Newark neighborhood, even to adults just a generation removed from the city’s old Prince Street ghetto and not yet so flawlessly Americanized as to be bowled over by the prowess of a high school athlete. The name was magical; so was the anomalous face. Of the few fair-complexioned Jewish students in our preponderantly Jewish public high school, none possessed anything remotely like the steep-jawed, insentient Viking mask of this blue-eyed blond born into our tribe as Seymour Irving Levov.” 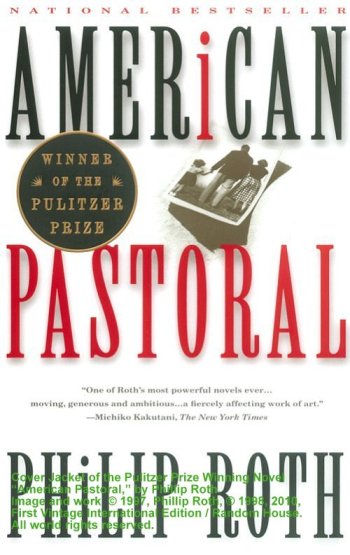 The Swede was Nathan’s best friend’s older brother. It is through his best friend that the narrator finds out, decades later, that their neighborhood’s hero has had less than the life of pleasure and achievement that they all assumed would be his. We begin to follow the tale of what went wrong that continues through the end of the novel, through the imagination of Zuckerman.

The Swede married an Irish girl, Dawn, a former Miss New Jersey whose family didn’t have much money. Perhaps that was his only mistake, and none of what happened would have happened if he had married a nice Jewish girl. Their daughter, Merry, wasn’t graceful, athletic, and charismatic like the two parents. She had darker hair than both her parents, she was a stutterer, and socially awkward. She lacked confidence. She seemed to have felt that she couldn’t compete with her mother for her father’s attention.

The turning point in Merry’s relationship with Seymour is when, as a pre-adolescent, she gives her father an inappropriate kiss. He rejects her immediately, mocking her stutter in the process. This causes her pain which fuels a breakdown wherein she overcompensates for her inferiority complex by creating a series of radical personas. This gives her a sense of purpose and belonging, which she did not feel at home with her own family.

The Swede is the kind of guy who always does what he is obligated to do (except for his choice in Dawn). His athletic talent in college gave him the option of playing pro baseball, but he followed instead in his father’s footsteps, manufacturing leather gloves. The father and son both pay meticulous attention to the shape of the leather, the smell, the way it is cut and cured, sewing it to have enough give, and treat their employees like family. The leather workers are highly skilled and respect their employers.

At first. What happened to the factory in the 1970s is the same thing that happened to the family. It broke down. Skilled workers became harder to find in the U.S. and companies sent their work overseas. Products were both poorly and inexpensively manufactured, as people failed to see the value in building something to last. The wardrobe became more casual and fewer people wore gloves as a part of formal attire.

But for the Swede, closing his factories as the other industries pulled out of the inner city and left behind a violent ghetto was the least of his troubles. Merry, who he genuinely loved, went missing under troubling circumstances. Merry was moved by radical anti-war sentiments to build a pipe bomb, which exploded in the local post office and killed an innocent bystander. After the explosion, Merry went underground. Her disappearance threw her mother into a deep depression, which she tried to combat by getting a facelift and having an affair, with a man whose “WASP” pedigree she had always envied. The marriage failed.

The next time her father sees Merry, she has become a religious radical, practicing strict non-violence and living without heat or electricity in an abandoned building. She no longer stutters, she seems to be starving herself, and she refuses to bathe. There is a confrontation after which the Swede can no longer live with himself.

While Merry’s actions seem more extreme than most, even for a time of upheaval and rebellion, the conflict between her generation and her father’s is still relevant today, when America struggles with the political inheritance of both our post WWII military dominance and the social changes brought to being by our loss of innocence.

If you read this book, you will think about the ways in which America has changed, for better or for worse. If you don’t get a chance to read the book, it will also be coming to the silver screen, having been optioned by Paramount and currently listed as in development.