UFO sightings in Birmingham UK during the last few years

There have been a number of UFO sightings in the UK recently, in fact Britain is probably one of the most active areas for seeing UFOs on the planet just lately.

Why is such a small country as Britain seeing so many UFOs? That is a good question, to which at present there is no answer.

Just a few weeks ago (on Christmas Eve) Andrew Freke, an amateur pilot for more than 15 years, spotted six pairs of mysterious bright orange lights flying above his Solihull home while he was smoking a cigarette at about 11pm. 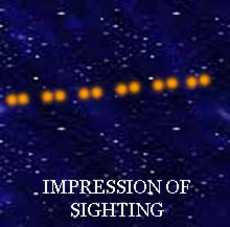 Many recent sightings of this nature have been put down to “Chinese Lanterns” and that might be a possible explanation. However, similar reports have been seen in many other countries.

A large percentage of the UFO sightings have taken place around the Birmingham and West Midlands area (quite a few have also been seen near Kidderminster).

A spokesman for the Ministry of Defence said: “The MOD examines reports solely to establish whether UK airspace may have been compromised by hostile or unauthorised military activity” adding “Unless there is evidence of a potential threat, there is no attempt to identify the nature of each sighting or report.”

Sadly, this is the fate of most reports and perhaps a good reason why the subject of UFOs is ridiculed so often, and dismissed as the figment of people’s imagination. If the authorities were to take some of these sightings a little more seriously and investigate them, maybe we could make a better judgement knowing the facts?

Other reported sightings around the Birmingham area over the years have included a “streak of light” passing about 100 feet over a person’s house, a “red and silvery figure-of-eight type object,” a “crescent formation of maybe thirty lights,” and a popular sighting of “three lights in triangle formation”

The following article is one that I personally submitted to UFO Casebook almost four and a half years ago:

This UFO sighting report was sent in by a Lady living in the Birmingham area (UK). Although this was not her first sighting, it is the first time she has reported one.

Whilst travelling from Warwick with her daughter and heading towards North Birmingham along the M6 (at approximately 10.45pm-11.00pm), something caught her eye in a nearby field.

She was driving along at about 55-60 mph, on the inside lane of the motorway, when she saw a bright white light.

She did not stop her car to investigate further (this is difficult on a motorway) and is uncertain where the object went, it just appeared to vanish.

It is difficult to guess the size of the object, but it appeared approximately 20-30 meters away from their vehicle.

The sighting took place on Wednesday the 10th of August 2005 (between 10.45pm and 11.00pm). We would love to hear from anyone else who might have seen this unusual light at around this time and area. It would also be interesting to receive information on any other sightings that include an object like this.

I’ve listed some of the other sightings seen around Birmingham HERE which go back a number of years. It is interesting to see how similar some of the sightings are.

For those living in the Birmingham (UK) and West Midlands area who wish to send in details of their own sightings (or other subjects), I would be happy to publish your reports on the Profindsearch Birmingham Guide. You can submit your articles HERE.