The Papagayo Doit Center in Liberia, Guanacaste, Costa Rica’s northwestern most province, is known for being the largest distributor of building supplies and material in the area. Something they are less recognized with, however none the less involved, is their generosity in philanthropy.

John Scheman, visionary and founder of the Doit Foundation, embarked on a mission of aid to do his part by assisting poverish Costa Ricans who find themselves unable to help themselves. It all began rather unassumingly when John set in motion, the Free Wheelchair Movement in Costa Rica. 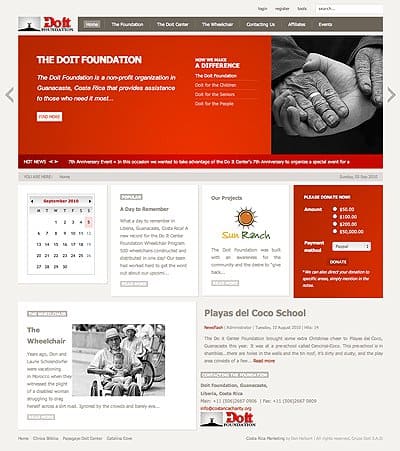 It was in this spirit of giving that the Doit Foundation of Guanacaste decided to revitalize their own homefront by redesigning their Costa Rica charity web site.

The new charity site will feature updated articles and events on the progress of the foundation which may also include a little integration with the highly effective social media sites like Twitter and Facebook.

Creative director, Jerad Portner, has been with the company for the past couple years. Jerad brings a young and enthusiastic new approach to the foundation and Doit Group as a whole.

Both John and Jerad are “hands on” individuals that can be found assembling wheelchairs at every charity event held by the group. The group feels that operating a charity involves more than attaching a name to a company but rather incorporating a true “soul” in to something that assists in helping people in need and providing hope for those who are in need of it most.

Currently the Doit Group is well on it’s way to developing, what is sure to be, the most environmentally aware, self sufficient, commercial and residential community in Guanacaste. Not to mention the 18 hole Robert Trent Jones Jr. championship course located on site along with the newest Costa Rica hospital by Clinica Biblica to feature the latest in medicare facilities to facilitate the increasing Costa Rica medical tourism trend. The proposed five hectare site for the new hospital was donated by the Doit Foundation to Clinica Biblica in order to facility and assist in constructing one of the most technologically advanced hospitals in the country.The Sun Ranch Project is destined to be the premier Costa Rica retirement community for those looking for peace of mind in a safe and secure community with all the onsite amenities anyone could ever require.