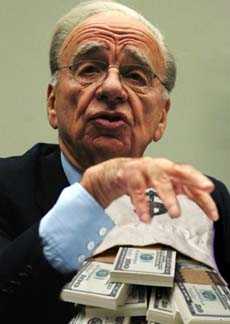 The decision by Rupert Murdoch to charge people for access to his online News sites, must rank as one of his worst ideas yet.

He clearly assumes that others will follow his lead (as they have done in the past), but on this occasion he may find himself treading a lonely path.

Whilst some readers may agree to pay for the content provided by The Times, it is extremely unlikely that many readers of the News of the World or The Sun will be tempted. It is perhaps no surprise that the online version of the Sunday Times has been selected as the first title to be tested in November (with the pay for content format).

Unfortunately, Murdoch and other News suppliers do not fully understand the power or the benefit of the internet, and wrongly assume that the decline in traditional Newspaper sales is a temporary problem.

The truth is that “paper” news is being replaced by the internet, just as emails are taking the place of letters sent by post. This is the future, and we must accept it.

As we all know, it is extremely difficult to control the content published on the internet, which creates problems in charging a fee for this information. Obviously, News suppliers need to produce an income in order to pay for the news that they publish, but this will have to limited to revenue generated by advertisements.

Perhaps we will see a situation in the future where reporters are paid a fee from the advertising profits that their articles help to create? This would encourage reporters to write articles that attract as much interest as possible, which could be beneficial to the readers.

Some News suppliers have complained about writers using their content when writing stories, but this is not uncommon, especially on the internet. Having hundreds (or thousands) of other sites linking to your article is actually a good result and typical of how the internet has become so successful. You only have to look at YouTube to see how this works and the recent video of Susan Boyle (Britain’s got Talent contestant). The video would never have received 103 million views in 9 days without the links.

As most people use the internet to search for products and services, advertisers will obviously be keen to use sites that attract interest. By charging for content, Murdoch is going to lose many visitors, and as the visitors dwindle, so will his advertisers.

With the current financial crisis affecting company advertising budgets, many advertisers are seeking value for money (a good number of visitors and reasonable advertising rates). Simply having a famous name (with a limited circulation) will no longer be sufficient and many companies will opt for sites that offer more realistic opportunities (Newsblaze is a good example).

Personally, I would like to see more mainstream media sites follow Murdoch’s example, as this will help to break-up the stranglehold a handful of media barons have on the public. For too long readers have been forced to accept the news that certain individuals choose to provide, refusing to publish stories that challenge those in power.

Hopefully, both readers and advertisers, will give their support to sites like Newsblaze and others, and reduce their dependence on suppliers who “make” news, rather than report it.