NewsBlaze News
Home Business Finance Why It Makes Sense to Allocate a Good Portion of Your Portfolio...

For the most part, analysts want us to see gold as an asset that protects wealth. Consequently, gold has historically seen significant rise in demand during periods of economic uncertainties. In essence, money managers heavily utilize gold to hedge their portfolios.

With such an approach, money manager tend to have a lot of gold in their portfolio when the economy reeks of weaknesses – and less so when the economy emits positive vibes. 2016 has been one of those years when gold experienced a huge rise in demand, especially because of the weak first quarter that the US economy witnessed. In fact, this brought about more binary options trades.

However, with the US economy since recovering from its first quarter troubles to emit positive vibes in the second quarter, the demand for gold has dropped, hence, tapering the rally seen in the first quarter. Here’s something to add context to that claim. So far, in 2016, the price of gold has risen by over 24% – of course, as of the time of writing. However, the majority of that increase came in the first three months of the year, with gold posting a meager 3.23% increase in the last six months until September 8.

And with the Federal Reserve floating the idea of a rate hike as early as this month, gold’s performance could worsen. Therefore, going with the logic of the crowd, it wouldn’t be a good time to buy gold. Especially considering that a rate hike in September opens door for the expectation of another December rate hike.

However, recent history suggests that investors would erring to assume that a rate hike or any other sign of a prospering economy makes gold a bad investment. In fact, it is time to stop seeing gold as a mere hedge tool. Investors need to seriously consider adding gold to their portfolios for the long haul.

US Economy Growing, Not as Fast as in Recent History

In particular, look at the part where the US government started having increasingly stronger confidence in its economy from a then lowest point of confidence in 1946. Between 1946 and 1981, the US economy saw a huge rise in confidence. However, that confidence has been on the decline since its peak of 1981 – at faster pace than it grew to the lofty heights of 1981.

This partly explains why researchers at McKinsey Global Institute suggested that investors should lower their expectations on the potential returns of their investment. They argued that the factors that have seen US equities perform impressively – which include rising corporate profits – are losing their influence.

If the US economy was growing at historical rates, we would have seen more and higher rate hikes than we currently have.

Gold Has Been Outperforming Stocks

Since the price of gold is a counterproof of the strength of the US economy, its performance over the last one and half decades also proves that the US economy isn’t growing as fast as thought.

Gold has simply been outperforming equities since the turn of the millennium. The reverse was the case for the prior two decades between 1980 and 2000. 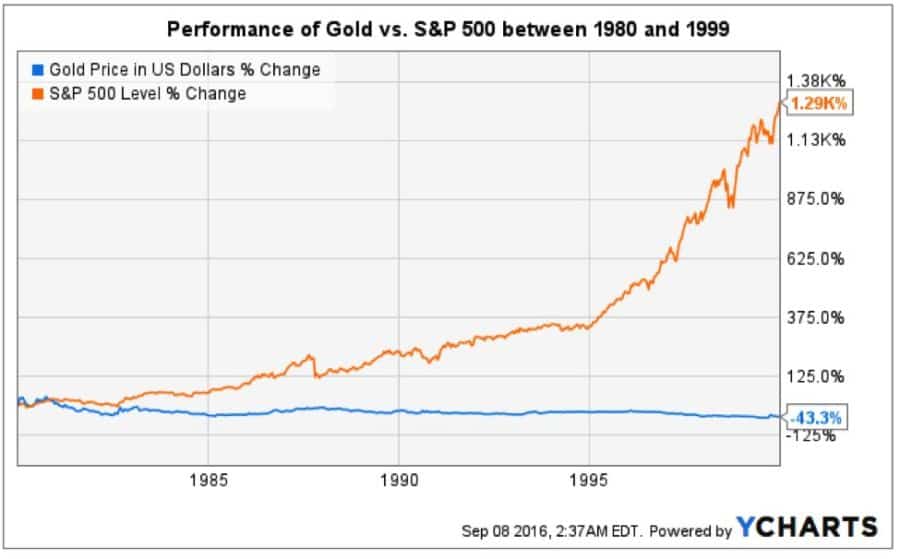 And here is what the performance has looked like since the year 2000. 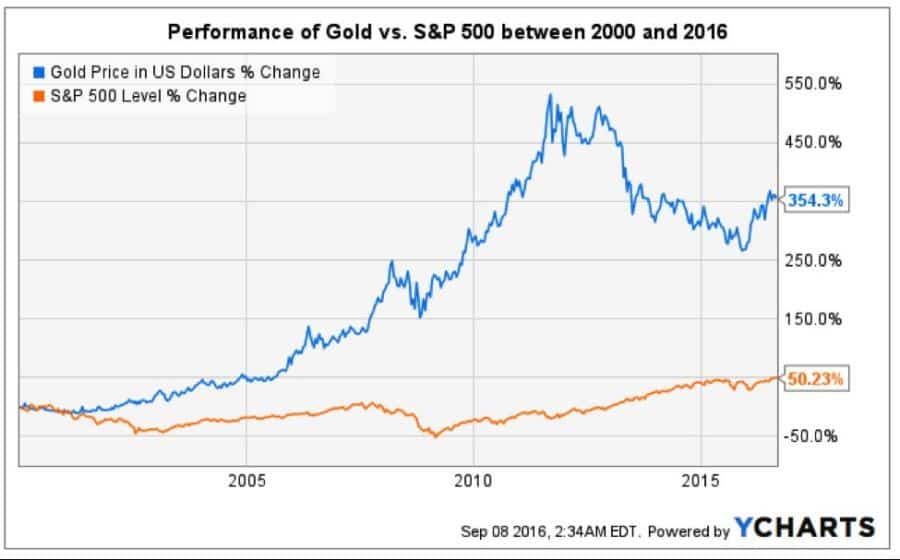 You should also notice how equities have seen tepid growth since the turn of the millennium. Couple the fact that McKinsey researchers said equities will see lower performance over the next two decades with the new gold outperformance trend, and it’s safe to say gold can actually help investors grow their portfolio over the long-term.