Whole nation cried when Shilpa Shetty in Celebrity of Big Brother faced racial abuse at London in 2007 and Indians at Australia recently but kept silence spectator when it happened to its own people from North East India. Non-acceptance and denial of the racial discrimination faced by the people from North East India by the law enforcement agencies and government authorities is the additional form of racial discrimination.

Enough incidents had happened in last six years at Delhi and NCR, probably begun with heinous crime of gang rape of a girl from Mizoram in a moving car at Dhuala Kuan in 2005, whose verdict came after four years with 14 years of imprisonment.

North East Support Centre & Helpline established in 2008, conducted two pilot studies – one in 2008, based on media reporting on sexual abuse in national capital, where almost 50% cases were happened to the girls from North East India. Second pilot study conducted in 2009, reveals 86% of North East people living have said that they are facing racial discrimination in various forms like, sexual abuse, physical attacks, vulgar remarks, social profiling and economic exploitation. These are documented and reported in national news papers and national televisions, from which, law enforcement agencies and government machineries should have understood the plights faced by the people of North East India in Delhi and NCR. 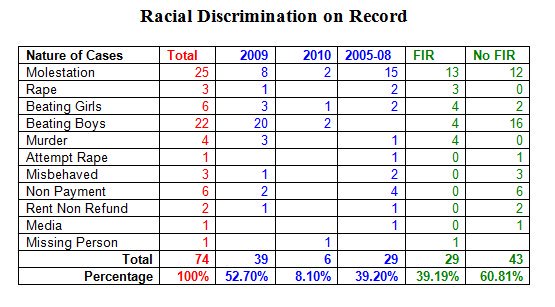 After much has happened, Delhi Police issued a “Zero Tolerance” policy in respect of crime against women including the violence faced by the people from North East India. Delhi police acted better at least in registering the complaints and yet to see their honesty in handling the cases to punish the perpetrators and give justice to the victims. A white paper must be given on how police has handled the cases pending in police stations on the cases related to the racial discrimination faced by the people from North East India.

“Racial discrimination is treating people differently through a process of social division into categories not necessarily related to races.” The plight faced by people from North East India has been in the form of social profiling. It is a crime as per Article 15 of Indian Constitution. “Prohibition of discrimination on grounds of religion, race, caste, sex or place of birth. (1) The State shall not discriminate against any citizen on grounds only of religion, race, caste, sex, place of birth or any of them.”

Blacks suffered apartheid for years and whole world condemns it. UN has condemned India’s caste system and termed it worse than racism. The Racism faced by North East India is definitely outcome of caste system. To fight racism, one can not ignore the apartheid of casteism existed among Indian societies.

Whenever sexual abuse and racial attack happens, the general public has social profiled the people from North East India on the bases of different culture, different look and different geographical background. Social profiling is against the ethos of India’s acclaim of unity in diversity. Social profiling will distance the communities from one another.

Economic exploitation is one of the immediate effects suffer from racial discrimination, particularly to young working boys and girls from North East India. Two sisters who where sexually abused by twenty men in Gandhi Vihar in January, 2008 had to close her cyber cafe through which, she supported her brother and sister who were pursuing for further studies. She could not relocate and start her business any more in Delhi and had to pack and go back home. Like her, most of the victims suffer sexual abused in their offices had to quit from job.

What are the Root Causes?

Hundred times have been asked this question, in deed many attempted to put into our mouths to blame North East girls for their life style. Many civil societies and law enforcement agencies even said this, in stead of condemning the crime.

The notion of social profiling – the opinion formed upon ones appearance, culture and levelling everyone equal with some opinions formed upon some experiences. Once a community is socially profiled, ones economic, social, educational and professional status does not matter and everyone is looked upon socially and racially with low image.

Next to social profiling is the mind-set of people on North East communities which has become a major cause of sexual abuse, social discrimination and economic exploitation. A mindset of social profiling is that the people from North East India are strangers, free culture, cheap and do anything one likes, you can get free. Social profiling is also seen in the attitudes of local police when they insult, deceive, ignore and deny the complaints and connived with perpetrators in many cases.

How do we handle this?

Never forget Niemoller’s poem. Stand up when it happens to person next to you, irrespective of race, religion and region. It is your rights to fight when it happens to you, but never take the law into your hand. Stay connected with your student bodies, community leaders and churches, if you are a Christian because most of the North East communities have their own churches in Delhi.

Street sexual harassment may be casually referred to as eve teasing but it is a crime under sections 354 and section 509 of the Indian Penal Code. Section 354: Assault or criminal force used to outrage the modesty of a woman. Penalty of two years imprisonment and/or a fine.

Section 509: Words, gestures, sounds, exhibition of objects that intrude on the privacy and are intended to outrage the modesty of a woman. Penalty of one year of imprisonment and/or a fine.

If you have been harassed on the street and want to file a police complaint, you can go to the nearest police station and file a First Information Report (FIR). It is your right to file an FIR. If you need help, call one of women’s helplines given in this booklet.

How to File First Information Report

FIR or First Information Report is the information about commission of an offence given to a police officer by the first informant. It initiates the criminal proceedings.