The mullahs and maulvis in Uttar Pradesh and some other self-styled Muslim leaders have threatened the Uttar Pradesh Mayawati government of dire consequences unless a chapter on the Ahmadiya Islamic sect is removed from the Social Study book of standard xth.

These maulanas, reverentially called ulama (scholars), although most of them are completely ignorant of the world around them, should rather be called Juhala (ignoramuses). They have warned Uttar Pradesh chief minister Mayawati of country-wide protests, if this section of the book is not immediately removed.

The maulanas may have actually struck gold in the form of this mention of Ahmadiyas as an Islamic sect in the Uttar Pradesh social science book. They have long been on the lookout for an emotional issue on which to create more disturbances in the country and mint money. The Babri demolition not only robbed the Sangh Pariwar of an issue to befool Hindus with; it also made the maulanas jobless. 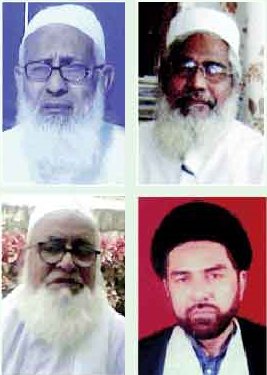 A few questions these Juhala should be asked. How is it that you all get so excited, if even a nincompoop like Chander Mohan claims to have embraced Islam, even if it is clear, right from the beginning that he is merely out to cheat his wife as well as his mistress? A wave of jubilation runs through the community almost world-wide even if one silly conversion takes place, even if it is done under compulsion which is totally opposed to Islamic teachings.

Now I ask why should the Mayawati government merely exclude Ahmadiyas from the text books? Why not Shias? Why not Wahhabis? Why not Sunnis? Why not Bareilwis? Why not Deobandis? Why not Sufis? And so on. They are all kafirs in the eyes of one or the other sect.

If no one knows what Islam is all about, why teach Islam at all?

Ask all these Juhala, mentioned in our report, who are asking for Ahmadiyas to be excluded from the text books, ask them the question posed by the former chief justice of Pakistan Supreme Court Justice Munir. Chief Justice Munir was investigating the widespread riots against the Ahmadiyas in 1953, and asked the Juhala of every sect in his country: Who is a Muslim? How would you define Islam? No two Juhala, he reported, in his report [available on this site in full], even from the same sect agreed on any definition of a Muslim.

So the real question before the Mayawati government would be: If no one knows what Islam is all about, why teach Islam at all? Excluding Islam itself from the text books should be the safest option.