The commercialization of mainstream media, degradation of media ethics and practices in India, and the subsequent eroding of public trust and support to the entire media community were some of the relevant issues discussed in a media conference held in Mumbai last week. The meeting also appealed to the media fraternity to play a constructive role in making South Asia a region of peace, trust and prosperity for everyone.

The speakers in a meeting of South Asian Free Media Association, which is recognized by the SAARC, were unanimous that media in the entire region must come forward to pave the way for an atmosphere of better understating among the people from different countries.

While admitting limitations and the nature of the recent challenges faced by the media in the region in particular and the globe in general, the speakers claimed that the media must stand alone for the benefit of the common people in the coming days.

An official statement of the annual general meeting of SAFMA (India chapter), expressed serious concern at the growing trend in the Indian media of selling news space, saying “The recent assembly elections in Maharashtra and elsewhere had revealed the spread of the pernicious practice of accepting money for giving editorial space to contestants. In fact, this evil had been perpetrated by institutionalizing it.”

Addressing the audience, eminent journalist P Sainath elaborated the challenges for media persons in India, where many of them are being forced to engage in some activities, which are not ethically acceptable to them. He claimed that the corporatization of the media world has simply threatened the existence of free media. 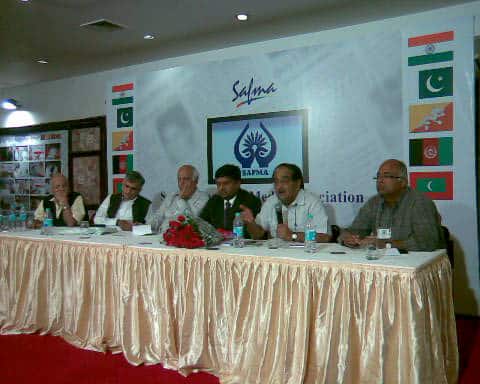 “Now the newspaper owners are greatly influenced by political clout. Futhermore, to entertain their growing demands, many media groups have even gone for arranging extra space in this advantageous period,” Sainath, the rural affairs editor of The Hindu, said, adding that if the newspapers (also TV news channels) start receiving huge amounts of money as advertisement, but in an improper way, the journalist-editors have hardly anything to do.

“I believe if a journalist wants to be corrupt, that is his choice. What I express concern that in many occasions, the reporter-journalist-editors are asked (or compelled) to do some activities, which they really don’t like to obey. But only because of the job, they do so and that way contributes to biased journalism,” Sainath stated.

He observes that the contract system of appointment of journalists by media management has affected the independence of media persons to a great extent. Sainath finally asserted, “Let’s finish the culture of ‘paid news’ in the media, otherwise it will finish us in the coming days.”

Sainath, while advocating legislation against such malpractices, emphasized strengthening the existing regulatory bodies such as the Press Council of India. He also opined that the Election Commission (of India) had a major role to play ‘in curbing misuse of the press and money power in politics’.

Inaugurated by the Maharashtra Chief Minister Ashok Chavan, the meet was attended by a number of eminent journalists from various parts of the country and also representatives from Pakistan and Bangladesh. In his inaugural speech, the Chief Minister Chavan urged the media persons from the region to play a greater role in paving the way for an atmosphere of better friendship among various nations for sustainable partnership, growth and development.

Eminent Pakistani journalist Imtiaz Alam, while expressing his views, observed that the media in both India and Pakistan have to play a responsible role while reporting bilateral issues.

“Islamabad wants peace with New Delhi. All political parties of Pakistan want peace with India. The Indian government should take the advantage of it and go for dialogue with the Pakistani government,” he added saying, “If the democracy derails in Pakistan, the relation between New Delhi and Islamabad will only get spoiled. The terrorists want the two neighbours to continue fighting against each other.”

While appealing to Indian journalists, the secretary general of SAFMA said, “Please don’t term Pakistan as an enemy nation. I say the same for the Pakistani journalists (towards India) as well. Our country is under tremendous threat from various corners. We expect some solidarity from the largest democracy in the world. Being a journalist, I feel we have to do more for the people of both countries.”

He was however critical of some so-called experts and intellectuals in both countries, who created more troubles. “I observe that there are growing numbers of Indian experts on Pakistan and similarly Pakistani experts on India. Please do not believe them as they lack credibility,” cautioned Alam.

Earlier, Alam, also a renowned human rights activist earlier offered his condolences to the victims and their families of the Mumbai tragedy (26/11). He concluded his remarks emphasizing the need for resumption of dialogue between New Delhi and Islamabad (primarily the security institutions) for curbing terrorism and also all round development of the region.

The Bangladeshi journalist Reazuddin Ahmed made the point that an inherent suspicion remained always intact with the people in general and the journalists in particular of South Asia. The editor of The News Today, an English daily published from Dhaka, emphasized more journalists to travel to their neighbouring countries to understand relevant issues and report accordingly. He also appealed to the governments of the region to relax visa rules for the benefit of travelling journalists.

Addressing the distinguished gathering, Ravi Shankar Prasad, the BJP MP said that India today has become the land of media. He maintained his view that the media should be allowed to work in a free environment without any intervention from the ruling classes. The former Information and Broadcasting minister (of India), Prasad however admitted that many Television channels in India now beam some visuals which are not worth viewing or are meaningless.

He argued that the continuous pressure to feed a 24 hours news channel with maximum amount of breaking news has put the journalists in a delicate situation.

“We must work out for an authentic mechanism (supported by the law) to monitor the TRP (of Television channel), otherwise it will definitely harm the entire medium. The business of TRP is creating the main problem for the channels,” Prasad opined.

The meet was also addressed by the eminent Indian journalist-editors K K Katyal (president of SAFMA India), Kumar Ketkar (editor of Loksatta), Vinod Sharma (political editor of Hindustan Times), Om Thanvi (editor of Jansatta), with film maker Madhur Bhandarkar, technocrat Sanjay Gaikowad and Sreekant Khandekar, where they talked about the challenging days ahead for the media and also many survival strategies that might have to be adopted by working journalists.

The meeting concluded with the election of news office-bearers of SAFMA India, where S Nihal Singh, senior columnist was selected as the president and Satish Jacob, former BBC broadcaster as the general secretary of the forum.

The coordinator of the meet, Kumar Ketkar, who was supported by Sanjeev Latkar, Vikas Naik and Nandkumar, expressed happiness that that the discussion during the programme was intriguing for everyone. Speaking to this writer, the Loksatta editor Ketkar also expected that the participants would go back with a new range of thoughts from the Mumbai meet to their respective places and would contribute to the media and society in general with their optimum capacities.