As the Independence Day and Republic Day approaches, the militant outfits of Northeast India impose boycott call on the celebration. The banned outfits, whose leaders are hiding on foreign soil, make it a habit to call for a strike to oppose the “aggression of New Delhi” in the alienated region. But amazingly, the counter reactions to such diktats start emerging more powerful every year.

The 60th Republic Day of the country also witnessed the same enthusiasm. Defying the diktat of the militants the journalists and other citizens of Guwahati came forward to celebrate. The conscious people gathered at Guwahati Press Club in the morning to hoist the National flag. They also joined a procession in the streets of the city shouting patriotic slogans. 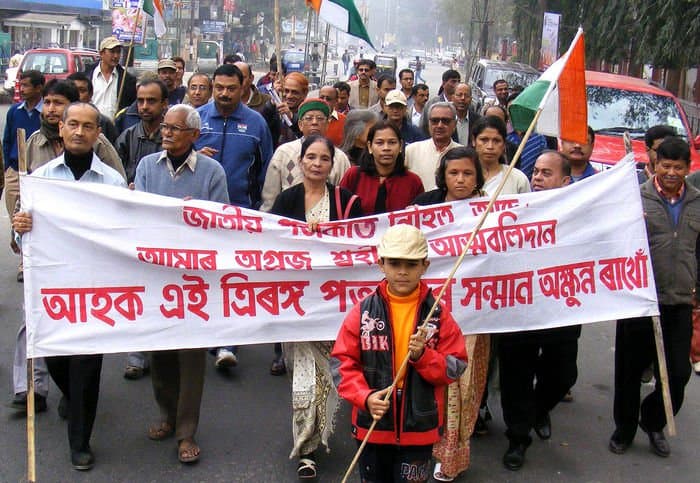 Hoisting the Tricolour in the press club campus, eminent litterateur-journalist Nirupama Borgohain stated that the Independence and Republic Day aptly represent the indomitable spirit of a free nation, before which all diktats melt away. India as a nation must nourish this sprit, she commented.

Earlier addressing the gathering, senior journalists Ajit Patowary and Rupam Baruah explained the significance of the Day and paid rich tributes to the martyrs, who had sacrificed their lives to overthrow foreign occupation.

In fact, it becomes a ritual for the separatist groups of Northeast India to impose diktats on the Republic and Independence Day of the country. However it seems to emerge as a self regulated responsibility as well for the conscious citizens to reject it outrightly. 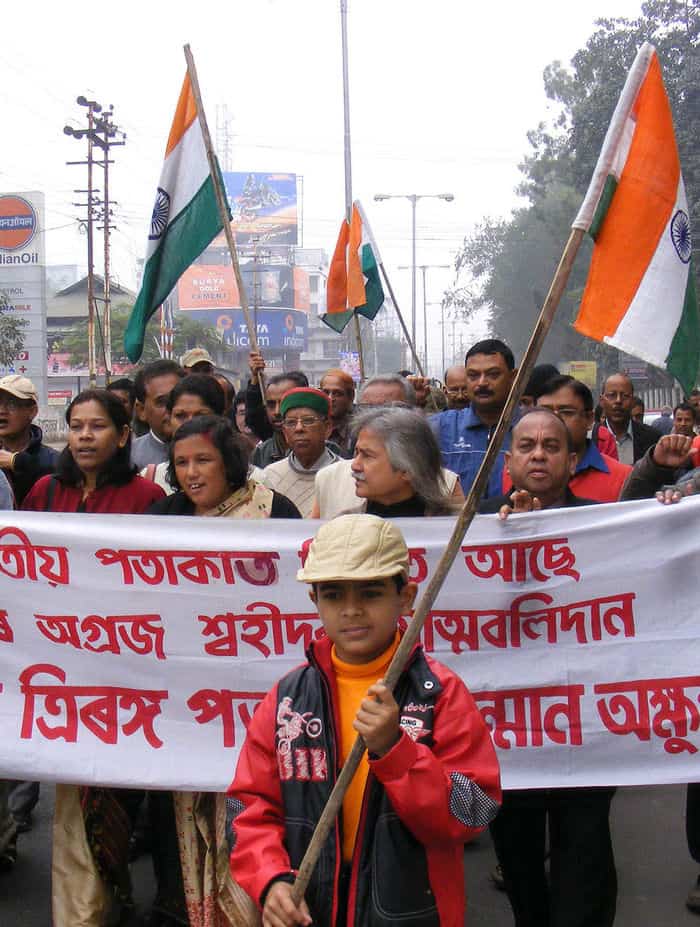 It may be mentioned that a citizens’ meet in Guwahati a week earlier, called upon the people of Assam and Northeast to celebrate the Republic-Day in each and every locality of the State and hoist the National Tricolour atop every house. Organised by the Journalists’ Forum, Assam (JFA) at the press club, the meeting came to the conclusion that ‘a clear message should go to those issuing a diktat against any celebration of the Day, that people will no longer tolerate any anti-national threat and will give them a fitting reply’.

This year, four armed groups of the region imposed a boycott call on the forthcoming celebration. In a Solidarity Statement issued by Kamatapur Liberation Organisation, Manipur People’s Liberation Front, Tripura People’s Democratic Front, United Liberation Front of Asom had urged the people to boycott and prevent any celebrations on January 26 in Northeast India. The Hynniewtrep National Liberation Council of Meghalaya separately called for a 24-hour bandh in the State on the day.

The region, surrounded by Nepal, Bhutan, Tibet, Burma and Bangladesh, nurtures nearly 30 armed groups who have been fighting New Delhi for demands ranging from sovereignty to self-rule. Draconian laws like the Armed Forces Special Power Act 1958 still apply in the region. In the last few years, many armed groups have made a ceasefire with the government, but the region remains conflict ridden.

“The imposition of the Indian constitution in the region completes 59 years this 26th January. During this period, scores of thousands of our peoples have been killed, tortured, maimed and hundreds of our womenfolk have been raped by the Indian Occupation Forces,” the statement, signed by the ULFA chairman Arabinda Rajkhowa and e-mailed to the media persons, stated.

Upholding the genuine and legitimate aspirations of all the people and ethnic groups of the region, the statement revealed, ‘a general strike will be observed on January 26, 2009 from 1 am to 6 pm throughout the region’. They appealed the ‘patriotic organisations of the region’ to endorse the statement and observe the Boycott and General Strike in their own capacities. 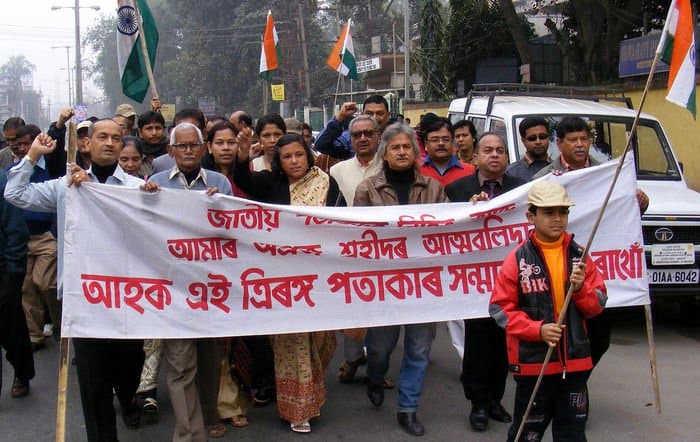 “The martyrs (of India’s Freedom movement) embraced death during the struggle so that we can live today as an independent nation. This day is an occasion to express our gratitude to them. We cannot forget them just because a group of militants want to terrorise us into forgetting them. We must inculcate a sense of patriotism in our younger generation and teach it to respect the Flag,” said D N Bezboruah, a veteran journalist based in Guwahati.

The former president of Editors Guild of India, Bezboruah also added, “We may not be happy with a particular government or successive governments. Governments come and go, but should that make us blame our glorious history of freedom struggle that has given us the right to determine our own future, or even to change the governments we dislike?”

The Republic-Day celebration, by the time, went off peacefully. Following the imposition of 17-hour general strike by the militants, the authorities put the entire region under high alert. The journalists based in Guwahati, after hoisting the National flag, took out a procession carrying the Tricolour and chanting slogans like Vande Mataram, Bharat Mata Ki Jai, Jai Ai Asom etc. 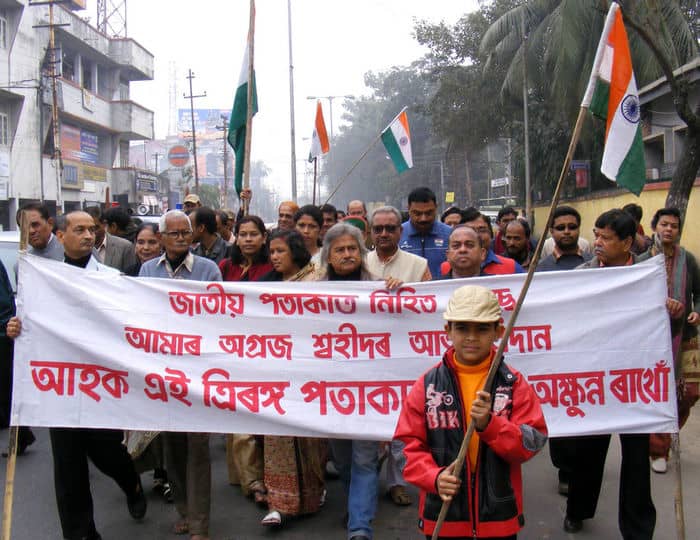 The day was also observed at Kumarpara Panch Ali, Bamunimaidan, Hengrabari, Japorigog, Khanapara, North Guwahati and various other localities and the National Tricolour was seen flying atop hundreds of houses dotting the city. In Udalguri of lower Assam, which got international media headlines after Pakistani flags were seen flying during the October group clashes, thousands joined the celebration and hoisted the Tri-colour.

“The generation that had lived through India’s freedom struggle and had witnessed the emergence of the Republic well understood the significance of the day. But the new generation, particularly that of Northeast, which has grown up seeing bandhs and boycott, of the Day may do well to have a fresh look on the importance of it in our lives. On the auspicious Day, our regional identity gives way to our national identity.

The Assam Tribune, the oldest English daily of the Northeast, made an editorial comment on the occasion that the ‘R-Day in a nation’s life offer not only days for celebration, but also moments for introspection’. Elaborating the scenario in the region as grim, the editorial also commented, “Today, as we celebrate Republic Day, the need of the hour is greater resolve amongst our citizens to work for the betterment of the nation, as well as the region, and strive to climb out of the mire we find ourselves in.” 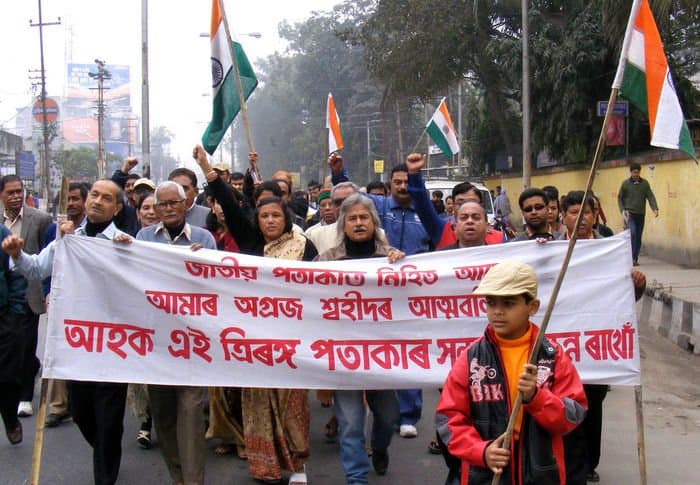 Platitudes, whether being mouthed by politicians or intellectuals, can never work miracles. What is required is honest introspection and positive action. If we are to create a better future for ourselves, the onus of responsibility lies on the shoulders of every citizen, no matter from which region or social strata, it concluded.

In fact, when mainland India observed the R-Day with fanfare, the people of Northeast celebrated the Day with utmost conviction. The region joined with the mainland with the carnival comprising various programmes like hoisting Tri-colour, ceremonial march past, competition for children and mass rally on the roads. People from all walks of life came to participate in the celebrations organized by both the government and also the communities.

The Governors unfurled the National flags in the State capitals of the region, where chief ministers with their ministerial colleagues and government officials attended the function. The Assam Governor Shiv Charan Mathur unfurled the Tricolour at Latashil playground in Guwahati and appealed the militant groups of the region ‘to shun the path of violence and join the mainstream by holding negotiations to settle their grievances’. 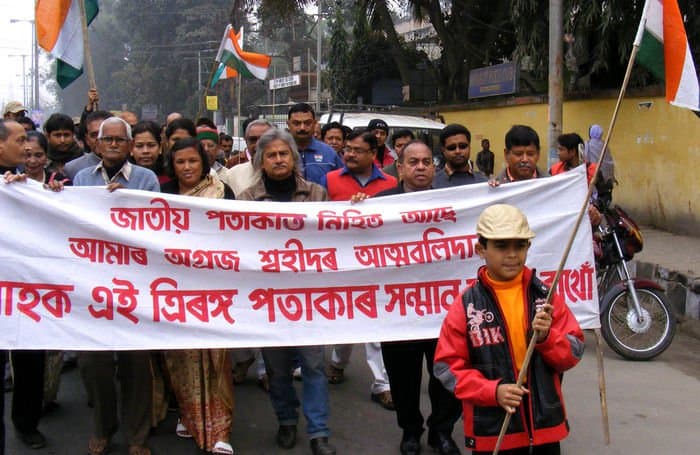 Similarly, the Tripura Governor DN Sahaya also urged the separatist groups to come forward for peace talks and engage themselves in the development of the region.

Mizoram Governor M.M. Lakhera unfurled the Tricolour at Assam Rifles ground in Aizawl, where as Meghalaya Governor RS Mooshahary hoisted the flag at Jawaharlal Nehru Stadium in Shillong. Gen (Retd) J J Singh, Governor of Arunachal Pradesh joined the programmme at Indira Gandhi Park in Itanagar and the Sikkim Governor BP Singh took part in the programme in Gangtok. The Manipur Governor Gurbachan Jagat joined the celebration organized inside the historical Kangla Fort and in Nagaland, Governor K Sankaranarayanan took salute from the ceremonial march past by the armed forces at the Secretariat Plaza, Kohima.

The Sentinel, another leading English daily of the region, made a clarion call to everyone to celebrate the Day with an aim to cherish our democratic values and the strength and sustenance of our democratic institutions in spite so many impediments. It argued that India being ‘a democratic republic is itself a reason to celebrate every day, despite all its aberrations’.

“Look at some of our neighbours. China, thanks to communism, is an authoritarian rule. Myanmar is an isolationist, barbaric, military dispensation. Nepal continues to flounder in its search for a democratic ideal, with the Maoists, apparently in the mainstream, now calling for a new ‘people’s revolution’.

And both Pakistan and Bangladesh, the two Islamic states in our neighbourhood, have democracies visiting them as a dream only to be sabotaged by the military and Islamist zealots,” the editorial added.