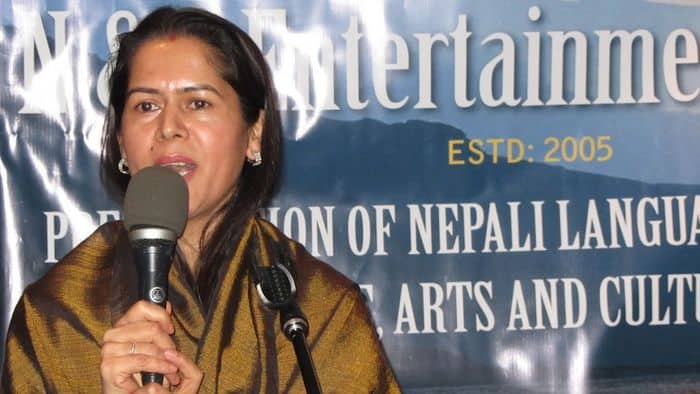 The event which was chaired by the Renowned Litterateur and the NYU Professor, Mr. Yuyutsu RD Sharma had the Writer and Artiste Mr. Alex Gargilis as the Special Guest. The International Nepali Literary Society ‘INLS’ Founding President, Litterateur Mr. Hom Nath Subedi who was the Chief Guest of the NY Nepali Poetry Festival ‘2012’ handed the ‘Certificate of Honor’ to INLS NY Chapter President, Litterateur Mrs. Poonam Kafle, ‘The Journey of Creation (Srijanaka Yatraharu)’, Media Houses- ‘USNepalOnline.com’ and ‘presschautari.com’. Litterateur Kafle and ‘The Journey of Creation’ were honored for their outstanding contributions in the field of Nepali literature.

USNepalOnline.com and presschautari.com received the honor for their outstanding contributions in the field of journalism.

The President of N & J Entertainment Inc. USA, Ms. Kamala Prasai after welcoming the guests highlighted the activities of the organization.A The primary objective of N & J Inc. is to promote Nepali language, literature, arts and culture and to honor the talents in their respective fields and hold poetry competitions, said Ms. Prasai. She announced that the N & J Inc. will have ‘Quiz Contest’ event to collect funds for the war victims and the disable children of Nepal. (see: http://nandj.org ).

The INLS Founding President, Litterateur Mr. Hom Nath Subedi while giving his speech praised Ms. Kamala Prasai’s dedication towards the promotion of Nepali language, literature, arts and culture. Litterateur Subedi also encouraged others to write. Writer Sita Pandey commended Ms. Kamala Prasai’s efforts to encourage the children towards literature and requested all to do the same.

The Guests of the NY Nepali Poetry Festival ‘2012’ gave credit to the moderators-duo Mr. Sahadev Poudel, Mr. Mani Bangdel and to the Founding President of N & J Entertainment Inc. USA, Ms. Kamala Prasai for the very successful event ever held in the Nepali community of NY City.