When Captain Niranjan Basnet of the Royal Nepal Army visited Devi Sunuwar’s house in 2004, he and his men found her family, but not Devi. They arrested Devi’s 15-year-old daughter Maina, saying they would take her to Panchkhal Military Barracks. The young girl was never seen alive again.

At that time, the maoist insurgency was devastating the country and the Royal Nepal Army was the only bulwark against that threat. In war, innocents always suffer, along with those involved in the conflict, sometimes more so.

The civil war ended in 2006, with the world powers inexplicably siding with the murderous maoists. The maoists and their new partners, the squabbling political parties promised justice and democracy. Families who lost loved ones to the maoists or the Army thought that killers might be punished, but in most cases, no justice has been served at all and killers from those turbulent times are still free.

Devi Sunuwar, Maina Sunuwar’s mother, continues to pursue then-Captain, now Major Niranjan Basnet. Unfortunately for Major Basnet and others, the Royal Army is held to a much higher standard than the rebel maoists.

One thing is certain, though. The army arrested Maina Sunuwar, tortured and killed her, then buried her body. 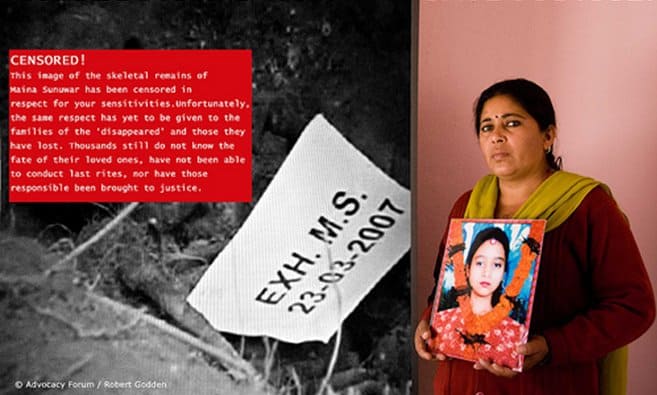 I am Devi Sunuwar, the mother of Maina Sunuwar, who was mercilessly murdered by the then Royal Nepal Army more than five years ago. I am sure that you all are aware of the murder of my daughter and the injustice involved in her case.

I am deeply hurt at the apparent dillydallying of the authorities concerned to hand over Major Niranjan Basnet, who was involved in the murder of my daughter. I had gained some hope that after the District Court of Kavre back in September 2009 ordered that he be suspended from his post and was recently vetted out from the UN Peacekeeping Mission in Chad and was returned to Nepal, that finally at least one of the accused would be produced in the court. This latest news is draining away my faint hopes of justice borne after the repatriation of Major Basnet.

Pains are of different forms but the pain of losing a child unjustly like the way I lost is lot more excruciating than losing anything else in the world. Can you imagine how painful it is to hear that your dear child, who was brought up and educated for fifteen long years after much travails and doing menial work, is taken away by soldiers, how they deny even arresting her… you have to live for years without knowing the exact fate of your child … whether she got proper food to eat, whether she has enough clothes to warm herself during winter, she must have been missing me a lot, where exactly she be now, is she already dead or meted out torture … you then have to leave your home, your village, your dreams, beg one agency after another to help you to find out the fate of your child, you even have to lie up as a criminal because of your desire to find the fate of your child?

You then hear that your child was submerged in water by the military personnel who took her, gave her electric shocks on her wet body until she breathed her last…. Desperate you, again have to beg every agency to help you to find the remains of your child?

I cannot explain in words what I have gone through. I know one can’t even gauge the trauma that I underwent. But I am the mother who had to witness the most harrowing scene of the skeletal remains of my beloved child being dug up. Nightmares are meant for the nights but I saw them in broad daylight. Moreover, I have not been able to perform cremation rites for my daughter as the remains are still kept at the Forensic Laboratory of Tribhuvan University Teaching Hospital. I am not in a position to pay my last homage to her departed soul before I see her perpetrators being prosecuted in a civilian court. Every second is difficult for me to live but the hope of getting justice for my daughter keeps me alive.

You all are quite aware of the scale of human rights violations committed during the conflict. Thousands were killed and similar numbers disappeared, and tortured. Why none of the perpetrators are brought to book? How the cycle of impunity will break? Just promising accountability won’t demolish the edifice of impunity but a genuine first step in this direction would be the prosecution of even a single perpetrator.

Therefore, I humbly appeal all journalists, human rights defenders, diplomatic missions, political parties, civil society organizations and other national/international organizations and all Nepalese brothers and sisters to show active solidarity and take initiatives in their respective capacities in my campaign to end impunity and to ensure the supremacy of justice by prosecuting the army officials involved in the torture and murder of my daughter, viz. Major Niranjan Basnet, Colonel Bobby Khatri, Captain Duo Sunil Prasad Adhikari and Amit Pun, in civilian court.

No Justice Yet for Maina Sunuwar and Many More in Nepal