The Jammu Kashmir Liberation Front (JKLF) says it will observe October 27 as a Black Day, as will other Kashmiri political parties in Britain. A demonstration will be held in front of the Indian High Commission in London. JKLF delegates from all cities of Britain will participate.

The head of the JKLF Diplomatic Committee, Professor Zafar Khan strongly condemned the arrests of pro-freedom leaders in Indian Held Kashmir. He said that it is the democratic right of Kashmiri people to boycott the elections which are aimed at extending India’s illegal occupation of the state. He added that India’s irresponsible behaviour and denial of the right of self-determination to Kashmir people has lead to bloodshed, pain and suffering in Kashmir. 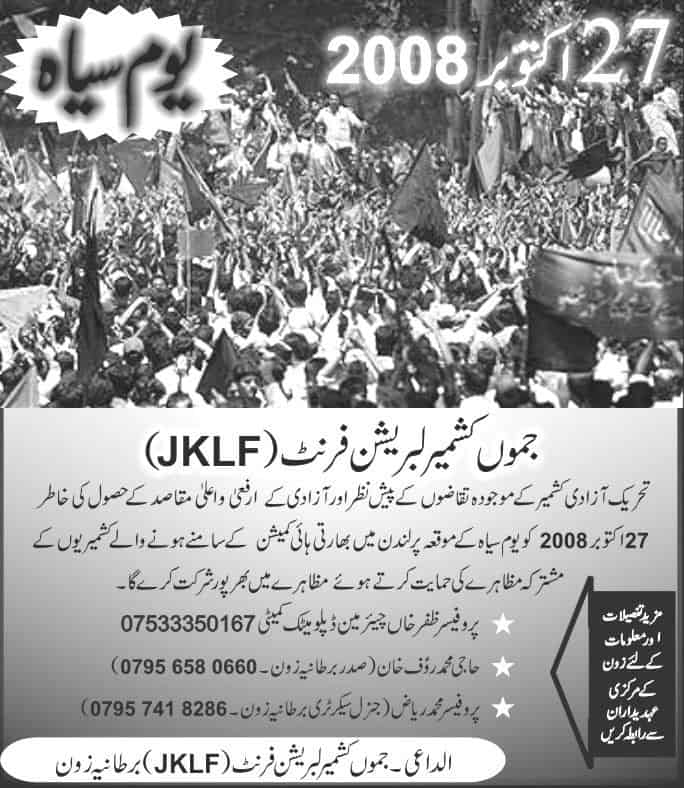 Zafar Khan said although some of India’s so-called democratic institutions are more socially embedded in comparison with other Asian countries, this does not qualify the Indian state to deny Kashmiris their democratic and political rights. He said the Kashmiri people’s collective call for an election boycott is justified and it is the right time for India to recognise Kashmiris’ right of self-determination.

Zafar Khan says the solution to the Kashmir issue lies with the people of Kashmir. They must be included in talks as the main party of the dispute, to restore national integrity and the glory of the forcibly divided state of Jammu Kashmir.

JKLF seeks the liberation of the Indian segments of the former Dogra kingdom of Jammu & Kashmir, as it existed prior to August 1947. The JKLF claims that they are not Islamist, but are nationalist, and oppose a merger of the territories into either Pakistan or India. – wikipedia