Libya’s newly appointed Prime Minister Abdullah al-Thinni resigned from his position after an armed attack on him and his family.

The incident took place less than a week Mr. Al-Thinni after the parliament requested him to form a cabinet.

Reports say al-Thinni was with his family when his convoy was attacked by a militia close to the area, raising fears among his family and his neighborhood. Heavy gunfire erupted in the area as well. There were no injuries reported in the attack on al-Thinni and his family. 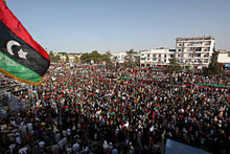 Al-Thinni led the cabinet as acting prime minister after Ali Zeidan was voted out last month.

There has been insecurity plaguing the nation for the past years after the fall of Muanmar Qaddafi. Libyan officials have been targeted and intimidated by the different militia groups as well.

Highligting the need for stable polical conensus at the time Libya faces transition, the United States of America today expressed condemnation of the armed attack against the new leaders.

In her remarks in Washington DC, Department Spokesperson Jen Psaki said threats of violence to the Prime Minister or others are unconscionable.

“We condemn them in the strongest terms.” – Ms. Psaki

The US government urges all Libyans to work together to find common ground to ensure security and good governance for their country so that they can move forward in their democratic transition.

Looking Back On Libya’s History

Libya has been engulfed by fighting since a pro-democracy movement opposed to the regime of Muammar al-Qadhafi emerged in February 2011 following similar protests in Tunisia, Egypt and other countries across North Africa and the Middle East.

Hundreds of people have been killed in the fighting and hundreds of thousands of others have been internally displaced or forced to flee to neighbouring countries.

The United States has played a central role in marshalling the international response to the crisis in Libya. Together with its partners, they have saved thousands of lives and helped confront a ruthless, erratic dictator who was poised to slaughter his own people in order to hold on to power.

Muammar Gaddafi was killed in his home town of Sirte on October 2011 when he was overrun by fighters seeking to complete the eight-month uprising.

Gaddafi’s demise marked the end of a 42 year rule of a dysfunctional brutal regime that was ruled by fear, torture and executions. Its mismanagement of the economy brought ruin to Libya and impoverished the Libyan people despite the huge oil and gas wealth.

Unfortunately, Libya is a long way from being considered stable. Just last month, on the anniversary of 9/11, Christopher Stevens, The U.S. Ambassador and three other Americans were killed in Benghazi, in an organized attack on a poorly protected safe house acting as a consulate. Many questions remain, including why the consulate was so poorly protected, why the security contingent had recently been withdrawn by the Administration, and why, when the Administration saw the attack, and the Ambassador was still alive, assistance was withheld.