October 29 is the international day of Cyrus the Great, the ancient ruler of the Persian empire and the founder of the first human rights charter in the world. Iranians commemorate this day by gathering at Pasargad, the tomb of Cyrus the Great, which is located in the Fars province. Siasat Rouz, one of the state-run Iranian newspapers said, ” .. cyberspace is filled with pictures of Cyrus’s tomb and invitations to attend the commemoration ceremony!”

Terrified of large gatherings and protests against the government, the Iranian regime has resorted to military exercises on Cyrus day and has increased suppressive activities in different cities in Fars province, especially regions that surround the Pasargad tomb.

The Revolutionary Guards and state security forces have virtually established a military curfew in the surrounding regions. They have blocked all roads that lead to Pasargad and are preventing vehicles from going to the site. The Revolutionary Guards are distributing an announcement to all vehicles and people who are moving toward Pasargad, which reads, “The illegal gathering at Pasargad on October 29 has been orchestrated by the dissenters and anti-state movements. All mischief-makers will be dealt with through law and the judiciary.”

Despite all these measures, large groups of people have gone to Pasargad by foot and vehicle. 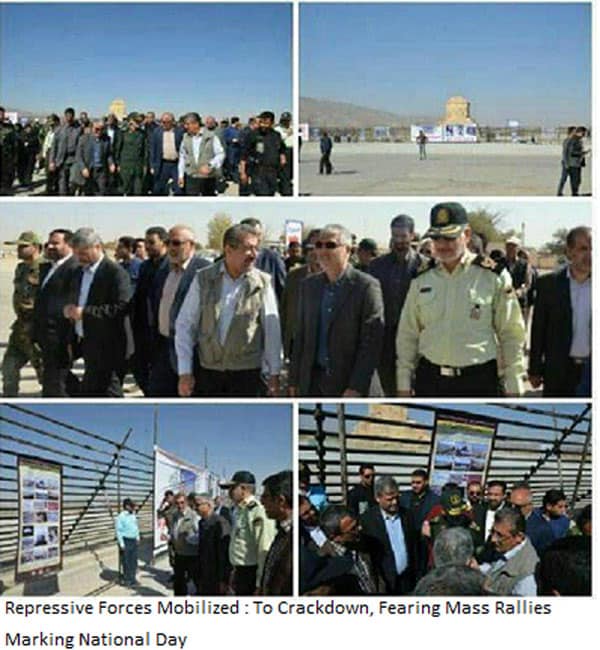 People from all over the country headed for Pasargad on Friday, October 27, in a show of unity against the regime and in commemoration of Cyrus the Great. Worried about protests and uprisings against the regime, state officials have expanded their suppressive measures over the past few few weeks, to prevent any gathering from taking shape. These measures have further escalated in the past week and days.

The Revolutionary Guards and state security forces have virtually established a military curfew in the surrounding regions. They have blocked all roads that lead to Pasargad and are preventing vehicles from going to the site.