Remember, if not for Israel, Jews would have no refuge and respite

It is the Israelis who created the problems they are facing today, when they invented and signed the Oslo Accord and expressed their willingness to creates a Palestinian State literally in their bedroom. They exacerbated their problems when they, unilaterally, disengaged from Gaza. Now Israel is paying the price for this immense stupidity, drowning in a quagmire of internal and external problems and stumbling stones, hardly any have a viable solution.

Israel is forever putting out fires.

In my opinion huge mistakes were made when Israel was basking in the glory of victory in 1967. Early in 1968, a few months after the war ended, Israel should have annexed under its sovereignty all of Judea and Samaria and should have made sure the Arabs they “gained” with the land in 1967 LEAVE one way or another. Just like the allies did in 1945, relocation and resettlement of population.

Israel also has a huge problem with the local Arabs, that she has brushed under the carpet for decades. These are mostly the Moslem-Arabs but also Christians, who are already Israeli citizens living on large areas of land, in large homes in their absolutely Jewless villages, all over the Galilee and central Israel.

These Arabs disobey the law, do not pay taxes, they do not identify with the country in which they are citizens and are lagging behind Israelis in education. These Arabs never integrated and how could they?

They are not Jews but living in a Jewish state; they do NOT see themselves part of the JEWISH state, its ethos, its holidays; they do not see the country’s national anthem, Ha’Tikvah, and the blue and white flag, as their national symbols. Many of these Arabs simply hate Israel, are incited by the Arabs of the surrounding states or those Arabs Israel “gained” in 1967 who “belong” to the PLO, the PA, the Fatah, etc. These Israeli Arabs are forming a fifth column, waving the PLO flag and wishing for Israel’s destruction or they wish to take over the country and get rid of the Jews one way or another.

Israel is simply a trap for Jews, unless REAL solutions are found and implemented to their fullest and soonest.

I do not trust any of the Arabs and wish them all bon voyage to other lands.

We, Jews, Israelis, must find a solution and stop putting out fires each day. We must stop leaning on explaining to the world, that does not WANT to hear our side. Just see what the EU did this week declaring a boycott on Jewish communities in Samaria, Judea, East Jerusalem and the Golan, as they believe Israel is an occupier, while ignoring all facts and agreements to which they were a signed witness.

The world could not care less about Jews – they never did, and they never will.

The world could not care less that all of the land, from the River to the Sea, belongs to the Jews according to the bible, history and connection to the land, jurisprudence, and even United Nations (UN) resolutions. The world could not care less about Jews – they never did, and they never will. For them Jews are second class citizens, always have been. The world wants to see an Arab state established on Israel’s back. The world prefers to see Israel disappear and where Israel is located now become an Arab state where Jews are second class citizens or are kicked out, if not worse. For the world, Jewish blood has no consequence, and it never did.

For the world, Jews have no place and/or right to a state of their own!

I am not a contemporary prophet, hysterical, or fearful, or overly zealous. History must teach every Jew that we have to be realistic and most cautious and do only and all that is good for us. We must protect our own interests and land, first and foremost.

Our motto: be welcoming, and wary, all the time. 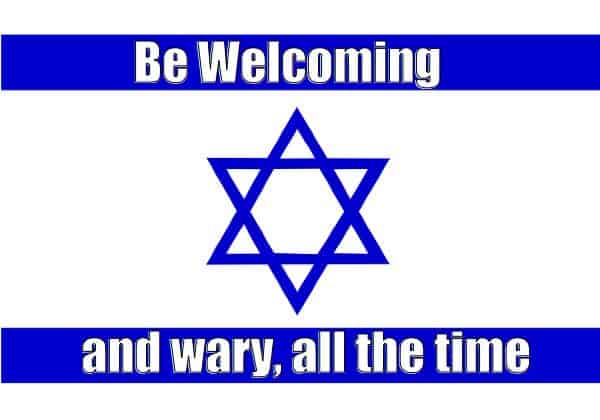