The city Safed (Tzfat), in the Northern District of Israel, at 900 meters elevation, is the highest city in the Galilee region, Israel, and thus serves as a strategic point. Safed, considered to be a mystical city, one of the four Holy cities according to Judaism and is filled with Jewish history from the Second Temple period to the present; the city is mentioned in the writings of the Roman-Jewish historian Josephus and the Jerusalem Talmud mentions it as one of five elevated spots where fires were lit to announce the New Moon and Jewish festivals.

Safed, with 33,358 residents (2015), is located 36 miles (58 kilometers) from the Syria border with Israel and 117 Km (72 miles) from Lebanon border with Israel. That means Safed is a target in war time from both enemy borders. As a strategic point, the city’s medical facilities are important to serve war casualties.

Taking all the above into consideration, if a war was to break out between Israel and Bashar Assad in Syria, or with Lebanon, a country hijacked by the terrorist organization Hezbollah that has 150,000 rockets aiming at Israel, Safed is considered to be a front line city.

A radical Shi’a Islamist militant group based in Lebanon, with the Jihad Council paramilitary wing, now also a political party in Lebanon. Since 1992, the group has been headed by Hassan Nasrallah, its Secretary-General, and is considered a terrorist organization by the United States, Israel, Canada and the Arab League.

Recently, it was discovered that Hezbollah has been emulating Hamas, and it is digging tunnels under the border of Lebanon with Israel and into Israel’s sovereign land. Such terror tunnels, dug into South of Israel from Gaza are no longer unique. Now Hezbollah is digging tunnels in northern Israel. Both terror organizations are seeking to use the tunnels to penetrate Israel and murder Israeli civilians, at least. Or they want to attack Israel and even try to conquer Israeli land and perpetrate other war crimes they are so good at doing.

Israel’s Prime Minister Benjamin Netanyahu claims that Hezbollah’s tunnels are part of a plan to capture ‘parts of the Galilee,’ Israel’s northern region.

Israel’s Prime Minister announced that the Israeli military will continue the operation until the targeted ‘outcome has been achieved.’ He added that the livelihood of Hezbollah, a proxy of Iran, is based on threatening and calling for the Jewish State’s annihilation.

The IDF (Israel Defense Forces) officials added: “Hezbollah planned in future war to use the tunnels to cut off Metulah,” Israel’s most northern town.

It is also possible that tackling tunnels is the first step before the IDF takes on Hezbollah’s thousands of missiles aiming at all of Israel.

Located in the mystical city of Safed, in the Galil (Galilee) one of the most beautiful regions in northern Israel, is a governmental hospital, founded 100 years ago; currently and for the past four years, Dr. Salman Zarka (colonel reserves) serves as the Director of Ziv Medical Center.

For the past hundred years, Ziv Medical Center has provided medical services to the multiethnic population of northern Israel, as well as to tourists in need for medical attention, IDF members and UN soldiers serving in the region. In recent years, Ziv has also provided lifesaving medical-humanitarian treatment to casualties of the Syrian civil war that has been raging in Syria for the past 5 years.

Originally, the hospital, established in 1910, aimed to give medical services to the Jews of Safed, known as the city of Kabalah. Ever since then, this medical center has been working toward improving the health of all residents of northern Israel, a population comprising a wide mosaic of cultural and religious backgrounds.

Apart from medical services, at Ziv they are diligently working to advance the field of clinical and academic research with the conviction that modern health care requires to search for every possible avenue to improve the treatment offered to patients. With such ideology in mind, at Ziv they synergistically cooperate with academic institutions in the region, including Bar-Ilan University’s Faculty of Medicine in Safed and other academic colleges and research institutes.

Help for Ziv Is on Its Way

Peace in the region may be late to arrive. Ergo, until such time, at Ziv Medical Center they are obligated to be well prepared for all emergency scenarios, enabling them to provide suitable medical responses to the residents and soldiers of the region.

Dr. Salman Zarka, the Director of Ziv Medical Center is considered the architect of the medical aid Israel has given to over 5000 wounded and sick Syrians while the war in this country has been raging.

During his visit to Israel, in 2017, Conan O’Brien visited Ziv Medical Center. Conan was amazed and excited by what is being done at Ziv for the sake of people from the neighboring country, Syria, a sworn enemy of the state of Israel. Conan stated that “Israeli doctors should win the Nobel Prize.”

Based on Conan’s statement, the ‘Do Not Stand Idly By’ Project was given birth. 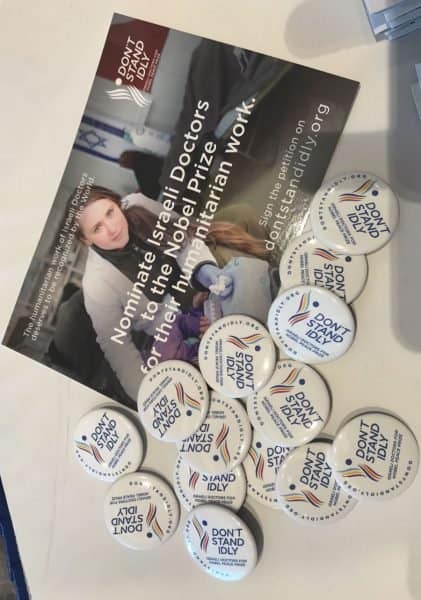 Behind the Nobel Peace Prize goal stands a twofold greater noble cause. Firstly, to communicate to the world that Israel is a top-notch humanitarian nation with a record of helping, so far, 140 countries that needed help as a result of nature’s disaster or human made one, such as war. Israel, the humanitarian nation it is answered the calls, one by one.

Secondly, and most importantly, to raise funds to reinforce the structure of Ziv against missile’s hit, and help adding necessary wards that will serve in time of war, if a war breaks out with Hezbollah in the North. The second goal is the most crucial one, because Ziv is Israel’s medical front line in a time of war in the north.

The ‘Do Not Stand Idly By’ will culminate in a black-tie Purim masquerade ball – to take place on March 21, 2019, at the Fontainebleau Miami Beach hotel, Florida.

Taking all three components into consideration, Safed’s strategic location, the threats Israel is now facing from Hezbollah and Ziv Medical Center’s crucial position in wartime, as well as the efforts to help Ziv readiness for wartime; also improve Israel’s image in the world as a humanitarian nation and the Israeli doctors to be nominated for the Nobel Peace Prize, the time to act is now.