On November 4, 1979, as the Iranian revolution reached its boiling point, militants stormed the U.S. Embassy in Tehran, taking 52 Americans hostage. In the midst of the chaos, six Americans managed to slip away and find refuge in the home of Canadian Ambassador Ken Taylor. Knowing it would be only a matter of time before the six are discovered and likely killed, the Canadian and American governments ask the CIA to intervene. The CIA turns to their top “exfil” guy, Tony Mendez, to come up with a plan to get the six Americans safely out of the country-a plan so incredible, it could only happen in the movies. 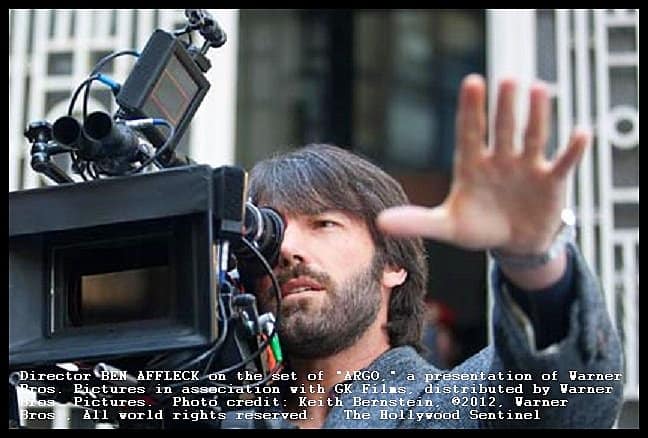 “Argo” chronicles the life-or-death covert operation to rescue six Americans-spearheaded by the CIA’s exfiltration specialist Tony Mendez-which unfolded behind the scenes of the Iran hostage crisis. The drama focuses on the little-known role that the CIA and Hollywood played, information that was not declassified until many years after the event. Academy Award winner Ben Affleck (“The Town,” “Good Will Hunting”) directed and stars in “Argo,” produced by Oscar nominee Grant Heslov (“Good Night, and Good Luck.”), Ben Affleck, and Oscar winner George Clooney (“Syriana”). The screenplay is by Chris Terrio, based on a selection from The Master of Disguise by Antonio J. Mendez and the Wired Magazine article “The Great Escape,” by Joshuah Bearman. David Klawans, Nina Wolarsky, Chris Brigham, Chay Carter, Graham King and Tim Headington served as executive producers, with Amy Herman co-producing.

Filming on “Argo” was accomplished in Los Angeles, Washington, DC, and Istanbul.

Film aficionados may recall that John Goodman played a supporting role in last year’s Best Picture winner, The Artist, which I reviewed here. What I didn’t mention was that not only did everyone walk out of the theater smiling, but at least one humble film critic (moi) also predicted that “The Artist” would win Best Picture at the Oscars. And that’s when everyone thought it was a long shot, just as people said “King’s Speech” was a long shot (which I also predicted would win best picture months before award season).

I may not be taking as much of a risk to predict that Argo will win Best Picture now that it already won Best Picture at the Golden Globes and SAG awards, but as my personal Facebook friends can attest, I made that prediction just after Thanksgiving, prior to the nominees being announced. How do I know? How did I know A King’s Speech and The Artist would win?

I realized The King’s Speech would win during Colin Firth’s titular monologue: I realized that it was not only about the moment in World War II when Europe first faced the truth that Hitler was evil incarnate and all good people were morally obligated to stop him. It was about good and evil in today’s post-moral society. The King’s Speech is about evil’s charisma and attraction; Hitler was a far superior orator to England’s King George VI. And this idea, that evil exists, that it can be savvy and attractive, and has the ability to take hold of social systems until they serve its end, is an important idea for us today more than ever. We must be vigilant. We must look beyond packaging and P.R. at the substance of what our leaders tell us. But nowhere does the film preach; every minute of the film serves the story of this stuttering, shy royal who is thrust into the spotlight by fate, yet nonetheless must rely on his message to win the hearts and minds of a people wary of another World War.

I realized The Artist would win as we left the theater and I could feel the collective energy that had been created, that it was different than anything else. But I suspected it was the best picture of 2011 even before I saw the film, when I read an early review in The Los Angeles Times, which piqued my interest in seeing the film to begin with. While King George VI had to learn to stand up and speak up for what was right despite his lack of self-confidence, The Artist’s George Valentin, played by the debonair Jean Dujardin, had to learn to adapt to changing technology despite his overconfidence in his status and belief that what audiences wanted yesterday will work tomorrow.

One of many bright spots in The Artist was the minute John Goodman’s producer character, Al Zimmer, appears onscreen, picking up an old crank telephone. Here is an actor whose performance was flawless, and truly supports the ensemble. He is truly an actor-qua-actor, who has clearly honed his craft, and knows a good script when he sees one.

John Goodman also appears in Argo, as a Hollywood makeup artist John Chambers, who occasionally picked up contract work from the CIA. The moment in the movie when John picked up the CIA’s call, unable to contain the excitement I felt, I yelled from my seat, “Best Picture!” (My apologies to anyone at the Regal on Thanksgiving who endured this little outburst.)

In the making of “Argo,” Editor William Goldenberg cut a million feet of film – more than 185 hours of raw footage – into a two-hour movie. (Source: Los Angeles Times). There is not one second onscreen that feels superfluous. From moment to moment, the crisis, told primarily through the view of protagonist, CIA expert Tony Mendez, builds up suspense regarding the fate of the six Americans hiding at the home of the Canadian consulate (well played by Victor Garber).

Tony, an extraordinary character, is shown as a flawed human, separated from his wife and son, and unable to tell them what he is doing, where he is going, or why. He must balance his duty to obey his superiors with his duty to save American lives. At the end of the day, when all credit has been deflected and his mission fulfilled, the CIA presents a medal to Tony in a secret ceremony where none of his family can watch. Since the mission is classified, he must return the medal afterward. A weary father and husband returns home to a wife who sees his flaws rather than his heroism, and may or may not embrace him. Tony Mendez, as Everyman, is asked to save the world and then forget about it. Ben Affleck’s restrained performance tells us with the posture of his shoulders and an exhale, that somehow, this is all that’s asked of any of us, all of us. And because the message of this film is timely, subtle, and serves the story rather than vice-versa, like The King’s Speech and The Artist, I predict it will win big on Oscar night.