I would never venture into writing about a subject I am not somewhat familiar with. I am not familiar with addictions and sobriety – Alcohol and/or drugs – because I have never been an addict.

A few days ago, after I attended The Brent Shapiro Foundation for Alcohol and Drug Awareness annual “2012 Summer Spectacular” Gala, it left me with no option but to write something so perhaps I can help save one person’s life with what I heard and what I write about here.

My first thought about the event was, it takes an awful tragedy to take an action. As my late mother always used to say, it takes two or three accidents in an intersection that has no traffic lights, all ended in fatalities, for the city to finally mark the intersection with the proper traffic lights. It took an unfortunate event for the Shapiro family in losing their son Brent to take the bull by the horns and spread the word, that addiction is a worldwide disease that society must deal with and contain it, as it is incurable.

Many of us became familiar with Robert Shapiro as the mighty attorney who defended O.J. Simpson. Robert is married to Linell. Until October 9, 2005 they had two sons, Brent and Grant. The Shapiro’s short story of a huge tragedy to any family who loses a child is that since his early teens Brent was addicted to drugs and alcohol. In his early 20’s Brent turned his life around and was sober for eighteen months; he was attending college and was doing very well.

One evening, he went to a party and got off track; he took half a tab of Ecstasy and had two drinks. He became ill but was not rushed to the hospital right away as the people with him should have done. By the time he was taken to the ER, he already lost his life, leaving father Robert, mother Linell and brother Grant to face a new reality.

Brent was 25 years old when he died so prematurely. 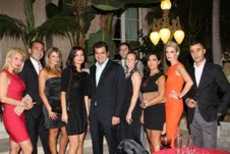 It was the 7th Summer Spectacular for The Brent Shapiro Foundation; the 7th year for this Saving Life event. Over 1000 beautiful people were shuttled to an extraordinary large estate in Beverly Hills that belongs to Mei Sze and Jeff Greene. The setting in the front yard of the palatial house offered the guests cheese snacks, non-alcoholic beverages while pretty stewardesses gave away sponsors’ beverages and e-cigarettes. The guests were of all ages, dressed in glamorous fashions; there were well known personalities. Among them I saw and recognized Astronaut “Buzz” Aldrin, TV personality Larry King, Ron Popeil, of Ronco Online Product Catalog, Kristen “Kris” Jenner, previously Kardashian, Christopher Kennedy Lawford and many others; the many beautiful and young ladies added decor to the glitz. The guests included many sponsors of the Foundation, friends of the Shapiro’s and I am sure some people who were there for the first time to mingle or even to listen as they are seeking help. I was told that each year the attendee crowd grows larger. A Ferris wheel and photo booth, by Foto Cabina added to the atmosphere.

Then came a sit down dinner time that was set on the estate’s backyard, catered by Wolfgang Puck Catering. The evening’s program, with former addict Television broadcasting personality Pat O’Brien, as the Master of Ceremonies, included the performance of Landon Eugene Murphy Jr., American’s Got Talent 2011, Chris Rene, one of the finalists during season one of The X Factor USA, live auction, conducted by Robert Shapiro, and runway fashion show with gowns by ‘G by Gil’. 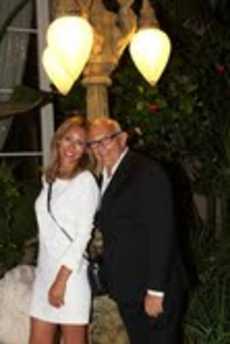 The Spirit Of The Recovery Award

As it does each year, the Foundation gave the Spirit of the Recovery Award, for sobriety and giving back to society, this year to Christopher Kennedy Lawford. This award was first given to Kelly Osbourne,the daughter of Ozzy and Sharon Osbourne and Sugar Ray Leonard was second to receive it.

Then Audrey Stoltenberg got on stage to receive a college scholarship the Foundation awarded her and to tell her story. Audrey was an addict since her youth, rejected by her family. She was in and out rehabilitation institutes and juvenile hall until she was taken in by Phoenix House, a nonprofit drug & alcohol rehabilitation organization with 150 programs in 10 states.

There in Phoenix House with the help of dedicated staff she turned her life around. To receive The Brent Shapiro College Scholarship you have to qualify, you have to be clean and sober and ready to take on the world. Audrey did just that and was rewarded.

It takes a life to save a life

The Shapiros’ tragedy, resulted in a strong alcohol and drug awareness message, they are now tirelessly conveying through their activities and Foundation has become very successful and people respond and join. The Summer Spectacular event is put together each year is one of the most glitzy and glamorous events that have taken place these past seven years in the glitzy Beverly Hills, California town. 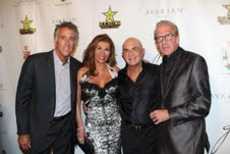 I sat next to a lovely couple, Ivana Ognjanovic, a general litigation attorney and her husband Gojko Vuckovic who knew Brent Shapiro and have been coming for years to the event in his name. We agreed that we can relate as we all have children.

Alcohol and drugs are now considered to be an epidemic. To bring awareness to focus, the Shapiro’s wrote the book, David’s Discovery, in memory of the son they lost, which helps with addiction prevention. They also worked tirelessly to have the Good Samaritan laws passed; these are laws, or acts in some cases, obliging people to give reasonable assistance to those who are injured, ill, in peril, or otherwise incapacitated (duty to rescue), and in all cases protecting people who do so against legal action. The protection is intended to reduce bystanders’ hesitation to assist, for fear of being sued or prosecuted for unintentional injury or wrong death.

So The Brent Foundation is the advocate for a sick society. Behind the evening’s glitz there is a great need to help our society.

Listen to their stories – What’s Your Story?

They say it takes a life to save a life; best you do not wait until then.