What is Iran afraid of the most amid multiple issues?

Considering the social-political status of Iran and its rulers’ fear of the very explosive situation inside and outside the nation shows that the days of the ruling mullahs are numbered. This is the fact that forces this barbaric regime to make bad and confusing decisions for every issue since it’s in whirlpools of many crises.

New student protests come just days after the regime announced that it would launch a new police force to tackle political dissent and expression. A fierce fight broke out on Monday, May 13, between students at Tehran University who had gathered to protest compulsory hijab, which has been imposed on the students and the Iranian women. 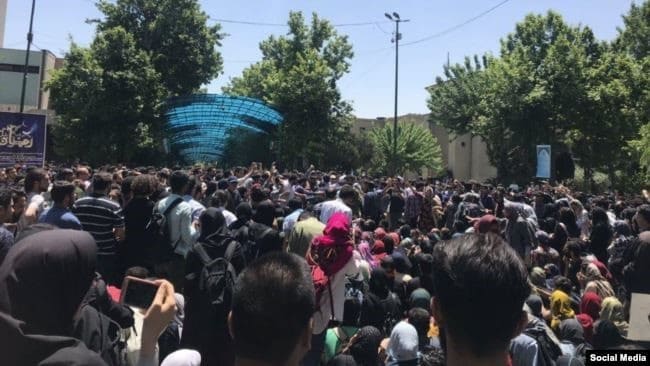 The protest gathering started from the streets of the campus near the Faculty of Fine Arts and continued at the university’s main auditorium where a deputy chancellor of the university tried to calm down the protesters and those who attacked them.

Reports say protests started in particular against the “Hijab and Chastity” campaign launched by vigilante groups on the occasion of the month of Ramadan.

The student protest continued inside a university auditorium, where a third video clip showed a pro-government activist running toward and punching another man, triggering a scuffle.

Implementation of measures like the US sanctions on oil, industrial metals, and banking systems are biting hard. History teaches us that mullahs are always ready to trick the International concerns on peace, security, and more importantly, challenging the international covenants by all means. They have shown their potentiality to prove this by exporting terrorism to the region and the Western Countries mostly into the European Countries for a long range of time, so far.

They also tricked the IAEA for years until the Democratic Alternative to this regime revealed Iran’s top secret atomic activities to the world. A threat to resume enriching uranium exposes the truth behind Iran’s nuclear program and shows clearly that it was never designed for peaceful purposes, but was always aimed at the production of nuclear weapons.

But the reality is that the ruling mullahs in Iran are mainly afraid of the people and their organized resistance as an alternative for a democratic change in Iran. This democratic alternative has a 110-year-old history in Iran.

This could answer the question of why the regime has been implementing repressive actions under many pretexts. The answer is that there is a growing resistance in cities of Iran, and the regime tries to stop it. 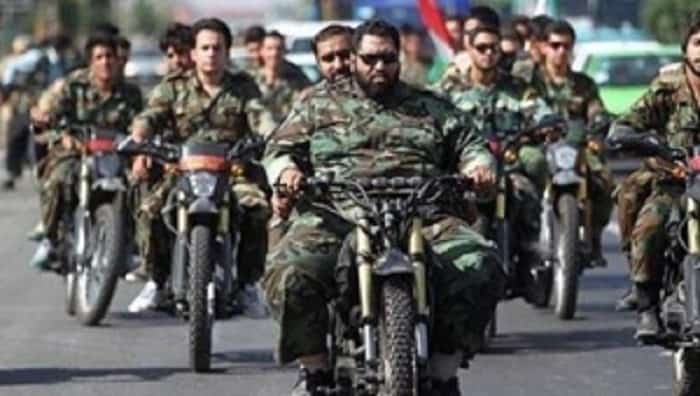 Last Wednesday, the regime’s chief of police, Hossein Ashtari announced the assembly of the Razavion Patrol. The patrol is an extension of the Basij patrols that have taken place since the nationwide uprising in early 2018. The Basij forces regularly set up checkpoints in areas where there are more protests and harass suspected dissidents (i.e. supporters of the MEK).

The Razavion Patrol will undertake similar activities but is expected to have more funds and resources than their Basij counterparts.

Gholam-Hossein Gheibparvar, a commander of the Basij forces, had alluded to the crackdown last September. He revealed, “we have begun a series of plans to upgrade the IRGC Basij … we believe our patrols are more effective than checkpoints. More recently, these Basij patrols have been dubbed as the Razavion network.”

The network was partially rolled out in November; it wasn’t a nationwide scheme until now.

The Iranian regime is increasing pressure on protestors. The most recent student protest will have only raised regime fears that the political opposition is drawing increased support from the Iranian population.

The year 2019 has seen regime officials become increasingly worried about the rising popularity of the MEK, the largest and most organized opposition group. Javad Javeed-Nia, the regime’s Deputy Prosecutor General in Cyberspace Affairs said: “Considering the fact that our enemies [the MEK] have established cyber armies against the [mullahs’ regime], those who care about our state must launch a media campaign against the enemy, identify the enemy’s strengths and weaknesses, and place forward an adequate analysis.”

The state-run Tehran Press News Agency also expressed concerns over the MEK’s use of the instant messaging app, Telegram.

The students’ rally must be seen in the context of a regime rapidly losing its grip on power in the face of mounting political dissent. The Iranian public, like Tehran’s youth, will not stand idly by while the regime embarks on a campaign of violence and repression. They cannot control the plummeting economy and the collapse of the rial, the Iranian currency, combined with the nationwide protests by striking workers that have continued for the past 16 months. This lack of control is a clear sign of a failed government that is now desperately searching for help.

The mullahs are scared. They are right to be. The tide of change is coming.

Iranian university students held a defiant protest against the regime on Monday in Tehran over restrictions on what female students are allowed to wear on campus.

At the rally, a large number of Tehran University students protested the regime’s oppressive policies under the pretext of hijab regulations on campus.

A video of the protest was posted on the YouTube channel of the People’s Mojahedin Organization of Iran (PMOI or MEK), the main democratic opposition that seeks to overthrow the mullahs’ regime.

The university’s Regulations Committee is imposing repressive rules related to women’s clothing, according to the students. “College students would rather die than live in shame,” the students were heard chanting.

One of the students was seen holding a sign reading, “Freedom of choice is our right.”

The Role of Resistance Units 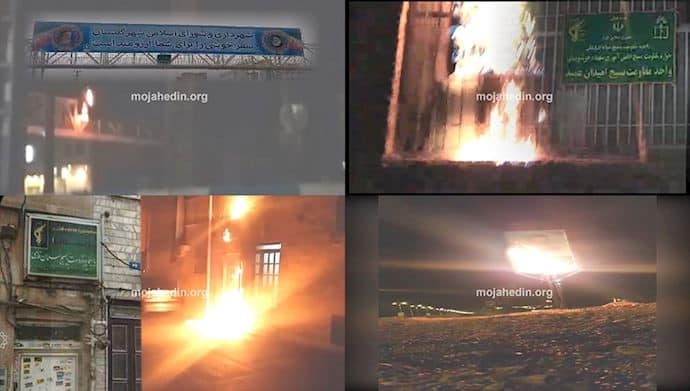 Resistance Units have excellent contacts with the protestors and the ordinary people in Iran. They have expanded their practices in different cities all across the nation according to reports.

They have destroyed icons of the Mullah’s Regime Officials such as Khomeini, Khamenei, Rohani, the founder, the supreme leader, and the president of this religious editorship. They also have set ablaze many Basijj, the paramilitary group related to the Terrorist Islamic Revolutionary Guards Corps (IRGC), main gates in cities of Iran.

However, this does not absolve the rest of the world from their responsibility. The international community is threatened by the Iranian regime, and it should not just sit back while this regime commits horrific and brutal human rights crimes.

Every government that stands for freedom, democracy, and human rights has a responsibility to strengthen the voice of the people of Iran. After four decades, the time has come – the regime is at its weakest ever point, and its malign meddling in the region is changing the dynamics against the interests of all but itself.