There is a historical right over the former and present territories of Ethnic Albania, which, since 1912, were under the savage colonial rule of the Balkan Slavic States (Serbia, Montenegro, Greece and Macedonia). No one has the right to deny the national and territorial identity of Albanians in the Balkans, despite persistent political and propaganda attacks of the Balkan colonialist Slavic states.

This wrong thesis and accusation is just an imaginary and false ghost that has nothing to do with the reality of the demands and legitimate efforts of Albanians to restore the territories of Ethnic Albania. What Albanians want is the decolonization and reunification of all Albanians into the national territory and state, just like other Balkan states. Nothing more, nothing less.

This historic and legitimate right should be recognized for Albanians by the international community. Otherwise, stability and peace in the Balkans will remain merely as an expected theoretical political category by its international “designers” outside the pragmatic reality in terrain. 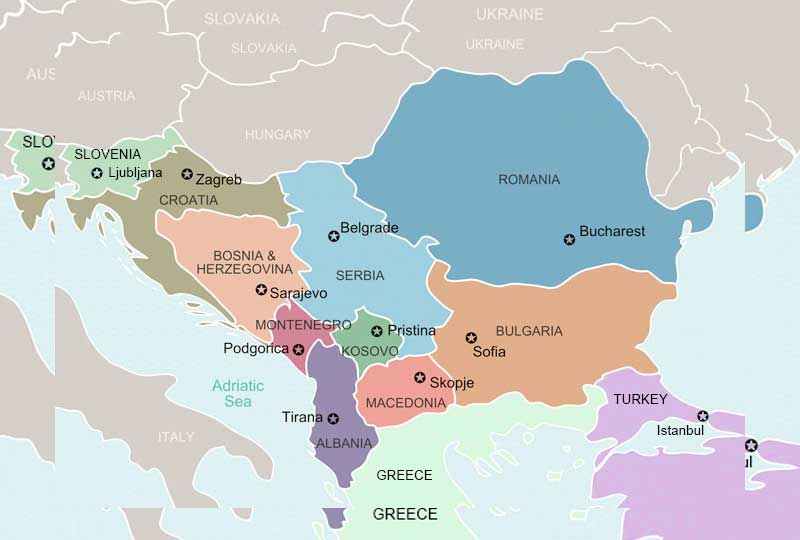 Earlier this month (May, 2017) former American Ambassador William Walker, head of the Kosovo Verification Mission of the Organization for Security and Cooperation in Europe (OSCE), participated as a guest at the 17th anniversary of the Alliance for the Future of Kosovo (AAK).

Speaking at that ceremony among others, Walker said : “this time I came to Kosovo as a representative of a new project. The purpose of this project that I am working on for is about all Albanians, in Kosovo in the Diaspora, in Albania. I’m working on a joint project of their unification. So I came here and this project I have founded is about bringing Albanians wherever they are in a joint project, to unite Albanians. Albanians in the world are joined in the 1990s for the sole purpose of liberating Kosovo, I was with them when independence was declared, all Albanians came together and celebrated, now is the time after the independence, the last step is to unite all Albanians and materialize all those achievements.” (See in: ocnal.com).

This Project for the re-unification of Albanians reintroduced by the savior and great friend of Kosovo, William Walker, poses no danger to the peace nor to the stability of the Balkans. Unfortunately, Serbia’s Prime Minister Aleksandar Vucic has lied about that.

It is a concrete benefit proposition that as soon as possible, should be taken into account by the EU and America. This proposition will save the Balkans once and forever from the hegemonism, expansion and colonialism of the Balkan Slavs headed by the Greater Serbia as their traditional Piedmont. Simply because the Albanians were surrounded by centuries by their Slavic enemies, just as the Israelis and Israel are by their neighboring enemies.

William Walker’s Project is also supported by prominent British historian Noel Malcolm (author of “Kosovo A Short History,” 1999) who said “The union between Albania and Kosovo is completely legitimate, if there is a strong desire of the two countries. However, I see several extreme problems in this idea. There is an idea in other countries that this can be dangerous and destabilizing for the Balkans. Personally, I do not see a problematic issue, but I see that such a campaign could irritate Western powers. It could have been a tactical error.” ( ocnal.com ).

Malcolm’s political skepticism does not justify the concrete situation on the ground because more than half of Ethnic Albania’s nation and territories were under the 100-year colonial rule of Greece (Epiri), Serbia (Nishi, Preseva, Bujanovci, Medvegja, Leskoviku, Bllaca, Kurshumlia, (Shkupi, Tetov, Dibra, KumanovA, Struga, Manastiri, Gostivari, Kërçova etc.). (See the historic documents: “The Expulsion of the Albanians – Memorandum” (1937) by Vasa Cubrilovic).

This Albanian national tragedy of the expelling and burning of the Albanian population from their homes and lands of Ethnic Albania, with historical arguments has also been confirmed by prominent British publicist Tom Judah in his book titled “Kosovo what everyone needs to know” (Oxford, 2008: 35). Judah writes: “Serbia, Greece, Montenegro, and Bulgaria all began to return to the map of Europe, Albanians realized that unless they organized themselves, their lands and future would be threatened. At first their response was to demand autonomy within the Ottoman Empire, and 1878 is the key date here. This was the year that Serbia expanded southward and taking Nish. The Albanian quarter was burned and Albanians from surrounding villages forced to flee. Albanians from several other towns and regions, such as Toplica, Vranje, Leskovac, and Prokuple suffered the same fate. The Serbian-Turkish wars 1876-1878 caused massive dislocations, with hundreds of thousands of Albanians put to flight in all directions, some 50,000 now came to settle in Kosovo.”

The Myth Of Greater Albania

This is the major political problem in Europe that needs to be resolved urgently and peacefully through the organization and holding of a European or international peaceful conference or congress. Like the Balkans, it will be under the former threats of conflict and the centuries-old wars caused by the colonialism and hegemonism of Balkan Slavs. Could it be the repetition of three Serbian genocides against Croatia, Bosnia and Kosovo (1989-1999).

It is also the unresolved colonial problem of Albanians in the Balkans. It is not the invented “Greater Albania” fabricated by Greater Serbia, Greater Greece, Greater Montenegro and Greater Macedonia, which have been living in the autochthonous territories of the Albanian nation and of Ethnic Albania for more than 100 years.

“The Greater Albania” is a political product of the Greater Serbia, not by Albanians nor William Walker!

Propagating the concept of the “Greater Albania” has never been “produced” by Albanians. Instead, it was invented and fabricated by Serb political ideology nationalistic propaganda over the course of centuries (i,e. since 1844 by Ilia Garasanin). Their intention was to create, protect and justify Greater Serbia as a Piedmont of the Balkans Slavs.

It could be said that between Albanians within Ethnic Albania in Balkans Peninsula there’s no idea, political or national concept about “Greater Albania,” but only ETHNIC ALBANIA. It was split by aggression and genocide of Serbia, Montenegro, Greece and Bulgaria since 1878 when the Congress of Berlin recognized these countries as independent. (See documents of Albanian history by Robert Elsie in: Albanianhistory ).

To understand and clarify report between two concepts “Greater Serbia,” “Greater Albania” and Ethnic Albania, first we should take into account the long history of the Albanian and Serbs relations over centuries, especially from the East Crisis (1876-1878).

From the above, we learned the true history of the annexation and colonization of the Albanian population and the territories of Ethnic Albania by the Balkan Slavs (1878-2017).

We still have to deal with the fictitious concept of the so-called “Greater Albania,” patented in the indecency of lies and defamations of statesmen, political leaders, daily media propaganda, falsification historiography by the Serbian Academy of Sciences and Arts and by the Serbian Orthodox Church. All these factors, politically have finalized the toxicological fictional concept of “Greater Albania” in order to intimidate and threaten the Balkans, Europe and the world, that allegedly the Albanians according to the Serbo-Slavic politics and propaganda supposedly “are wanting to conquer and destabilize” the Balkans.

Serbian-Slavic Colonialism in the Balkans

Finally, the inevitable question is: – For how many years, decades and centuries, should politics, diplomacy and science of Europe and the whole of the world deal with Serbian-Slavic colonialism in the Balkans?

The Serbs suppose that Albanians are trying to establish “Greater Albania,” but the question is: why does this qualify as wrong and dangerous for stability and peace in the Balkan region?

As long as the Greater Serbia exists, and it is still alive from 1878 up to now (2017), why is that not hindering anyone, although almost 50% of its territory belongs to neighboring countries such as Albania, Croatia, Hungary and so on?

Is this okay, that Greater Serbia does not threaten the peace and the stability of the Balkans and Europe? – Whereas, the reunification of the Ethnic Albania (which Balkan Slavs are calling “Velika Albanija” – Greater Albania) is considered a Balkans nightmare?

Why is there a Greater Serbia in the Balkans (1878-2017), but there can be no ethnic Albania, which through aggressions and several genocides has been destroyed, annexed and colonized by this Greater Serbia, based on unjust political decisions of the Congress of Berlin (1878) and the London Conference of the Ambassadors (1912-1913)?