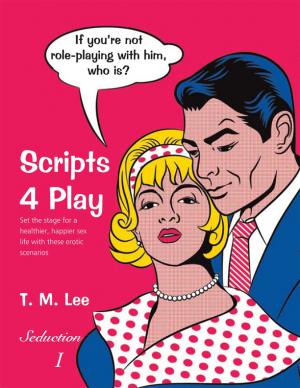 Lee says we’re in a sexual depression and she has the statistics to prove it: the results of the latest Sexual Wellbeing Global Survey, sponsored by the condom manufacturer Durex. The survey of 26,000 people in 26 countries reveals that only 44 per cent of couples are fully satisfied with their sex lives. (Results of the survey are available at www.durexworld.com.)

Lee designed her playful scenarios to appeal to a variety of tastes and moods. For instance, she engages the romantic sector with The Way Your Lips Curve. A southern belle named Miss Savannah and her butler Beauregard burn with lust, and love, for one another. As Beauregard massages each part of Savannah’s body, he tells her why that part is beautiful. Savannah returns the favor.

All of Lee’s scripts are women-friendly and empowering, unlike most traditional erotica in which men come first and women have to rely on the trickle-down effect. This enlightened philosophy is especially evident in Pearls, in which a sexually repressed career woman named Sophia hires Antoine, the creme de la creme of escorts.

According to Thomas Erwin Gertz, Diplomate, The American College of Sexologists and Past President, American Association of Sexuality Educators, Counselors & Therapists: “Certainly individuals reading them will be able to enhance their sex lives, thanks to your Scripts. Keep up the good work, making sex more enjoyable for people.”

Scripts 4 Play Seduction I is priced at $US13.99 and is available for download at www.scripts4play.com.

In addition to Scripts 4 Play Seduction I, Seductress T. M. Lee offers My Velvet Valentine for couples who don’t want to suffer from the excruciating pain of Bedroom Boredom; who instead want a bedroom filled with fun, laughter, and excitement. “My Velvet Valentine helps couples add a little imagination, a dash of creativity and a whole lot of fun to their love lives,” says Lee. “It adds sugar and plenty of spice to sex up the fires of lust.”

Scripts 4 Play Seduction I is available now. My Velvet Valentine ($US19.99) will be available at www.scripts4play.com on January 11.

27,000 Applications for Canadian Parental Sponsorship Received in Under 11 Minutes

The Benefits of Home Ownership