“Silence is said to be golden. Silence about genocide is not.”

While the US and the UN say nothing, the other side (the Iranian regime and its obedient servants in Iraq) are free to put their own case. Also, having killed 52 people, abducted seven and got away with it, they are bound to think they will get away with it again.

The Prime Minister of Iraq denies that he had anything to do with either the killing or the hostage-taking, but what else would anyone expect him to do? It’s not as if it were just one person’s word against another’s: there is ample evidence, including the 70-page report by the legal firm Perseus Strategies, which the US and UN are simply ignoring. The State Department claim they have “no credible evidence.” Which is more credible, that report and the other documents which, as the Iranian Resistance repeatedly point out, can be produced in any international court, or Maliki’s insistence that he knows nothing about an attack which could not have been carried out without, at the very least, the collusion of his government’s forces? 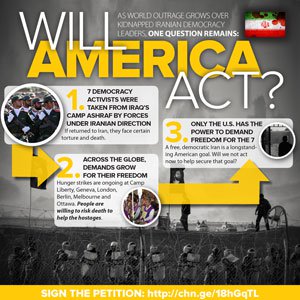 Mr Rahim Goreishi, who was taken hostage by the same forces in 2009, identifies in his interview the mistake which Maliki made last time and will be careful not to make again. He allowed the US and UN to visit the prisoners, with the result that their prison was identified. This time he is not only moving them around, but refusing to admit he knows anything about where they are or what happened to them. But if they are not in prison in Baghdad, where are they? Camp Ashraf is closed and they haven’t gone to Camp Liberty. They can hardly have disappeared into the desert.

The “Senior State Department Official” who claims to accept Maliki’s version apparently thinks they have left Iraq, but hasn’t, so far as I know, produced any alternative theory as to where they have gone. This suggests that the Department refuses to commit itself. So does the United Nations; ever since 1 September it has been asked to conduct an investigation and send blue helmets to Liberty, but nothing happens. There is nothing new about this. Both organisations have been behaving like this ever since 2009, and we know the result: 112 butchered, seven kidnapped, and nearly three thousand more in constant danger of meeting the same fate. The US and the UN know it too. They are still silent.

As the World Hunger strike enters its 100 days, with resolved participants who insist they will not be used as carrots for any deal with the Iranian regime, lawmakers, not the governments, worldwide are demanding the two major powers responsible for the War crime to undertake their obligations for the safekeeping of the 3000 remaining refugees and pro-democracy activists.

California Democrat Brad Sherman also urged the US to insist that Iraq restores 17,500 anti-blast T-walls to Camp Liberty to protect residents there from further attacks.

Tom Ridge, Assistant to the President for Homeland Security has recently said : US must not forget Iranian dissidents in Iraq, who were promised protection. 1

The Parliamentary Assembly of the Council of Europe (PACE) called for an investigation 2 into the September 1, 2013 attack at Camp Ashraf by Iraqi forces demanding the rights of the exiles in Camp Liberty to be fulfilled by the US and UN and the safety of the 7 hostages be guaranteed before they are extradited to Iran or harmed in any way.

Meanwhile, pressure is growing. In a US Senate hearing, Senator Robert Menendez warned that the Foreign Relations Committee would not want any weapons to be sent to Iraq until the situation was resolved. 6,700 Jordanians have signed a petition demanding the release of the hostages, guarantees of safety for Camp Liberty residents until they leave Iraq and the presence of UN Blue Helmets at the camp. So much for the claim, endlessly repeated by the pro-regime websites, that Iraqis hate the MEK and regard them as terrorists. How much more pressure is needed for the silence to be broken?

Carolyn Beckingham is a freelance writer and long-time supporter of the Iranian Resistance fighting to bring justice back to Iran.