NewsBlaze News
Home World Camp Liberty US and The Free World Must Help Iranian Resistance in Pursuit of...

The Personal Perspective of a British Supporter

For the last decade and more, the world has watched the disintegration of the countries of the Middle East as their people struggle to gain freedom and democracy. In the rush to overthrow ruthless tyrants and dictators, it appears that there is no clear vision of how democratic systems would work in countries whose peoples are fiercely divided by sectarian allegiances.

From the comfort of our armchairs, we watch with horror the tragedy unfolding in Syria. We see Iraq descending further into violent chaos. The situations in Egypt and Libya are far from stable. The Israeli government is reviled across the Arab world, for its shameful policies towards the Palestinians, but also hated by many for existing at all. We ask ourselves, “Why does it have to be like this? There must be another way.” There is another way, if only leaders of the free world could see it and grasp it by the hand.

About six years ago, I signed a petition about human rights abuses by the Iranian regime. I began chatting to the Iranian ladies who were collecting signatures, and listened to the stories of their families, many of whom had suffered and died under the brutal rule of the Mullahs. I later learned about the plight of the Iranian dissidents living in Camp Ashraf in Iraq, and felt compelled to find out more. The more I discovered about the residents of this camp and about their families and friends, both in Iran and those exiled world-wide, the more compelling the cause of the Iranian resistance movement became. The more I got to know members of the movement, the more convinced I became that these were very special, intelligent, warm, gentle people. Many have given up good careers in the free countries where they now live, in order to pursue their dream of a free, democratic, secular Iran. 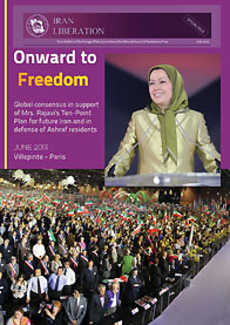 My husband and I were invited to a social event put on by the Iran (now International) Liberty Organisation in London. My husband was skeptical about getting involved, but agreed to come along. Upon arrival, we were surprised to see tables set for dinner. Seated around them were mainly non Iranian, British citizens. We were received with a warm welcome, hospitality and good Iranian food cooked by chef Mohamed. After a very enjoyable meal and chatting with our fellow guests, we watched some video footage about Camp Ashraf, and then listened to various speeches.

UN and US Abrogate Their Responsibility

Malcolm Fowler, an international human rights lawyer and representative of the British Law Society, spoke passionately and convincingly of the situation at Camp Ashraf, whose residents had been promised protection by the Americans and the UN, as Protected Persons under the 4th Geneva Convention.

We learned about the organisation of the National Council of Resistance of Iran and its leader, Mrs Maryam Rajavi. 1

The National Council of Resistance of Iran is an umbrella organisation representing about 500 Iranian opposition groups, the largest of which is the PMOI, sometimes referred to as the MEK. We accepted an invitation to visit the headquarters of the NCRI in a village near Paris and to listen to and question Maryam Rajavi in a totally free and open manner. We also met many other members of the NCRI. As time went on, we became familiar with the principles underlying the vision of a free Iran.

Surely this was something democratic free governments should be welcoming with open arms? Surely the attacks and abuse of the human rights of the residents of Ashraf should be cause for international outrage. No, not so – the PMOI/MEK had been on the UK and European lists of designated terrorist organisations and was still listed as such in the USA.

When brought before the High Courts of Justice both in the UK and throughout Europe, no evidence could be found to justify this designation and Governments were forced to remove it from the list. It took another 4 years before the USA did likewise. However, in the face of legally tested evidence, the UK and US governments particularly, continue to behave as if members of the resistance movement are terrorists. Why should this be? There is very clear evidence that the British government, in order to support short term British commercial and political interests, is pursuing a policy of appeasement towards the murderous regime in Iran, a regime viewed by many as a major sponsor of world-wide terrorism.

The Iranian propaganda machine ensures that the ordinary people of the world at large would not question this policy, and continues to roll out the most vile and ludicrous statements about the resistance movement and its members. This propaganda permeates the internet.

I cannot deny that the power of this propaganda did from time to time cause my husband and myself to waver and we continued to delve into the complex history of the PMOI, to read, research and listen.

History Of The PMOI/MEK

The PMOI/MEK started as a left wing resistance movement against the autocratic rule of the Shah and initially supported the revolution that resulted in an equally odious theocratic dictatorship. When the new government established itself as yet another dictatorship, and during the 1980s was responsible for the torture and executions of an estimated 30000 members of the resistance, the PMOI/MEK became an armed resistance movement against the Mullahs. However, following the end of the Iraq Iran war it renounced violence and has subsequently contributed to the policy of the NCRI that seeks to establish a government in Iran under-pinned by the following principles. 2

1. Establishment of a republic through universal suffrage and the ballot box as the sole criterion for legitimacy.

2. A pluralistic system in which all individual freedoms are respected, including complete freedom of expression, of the media and access by all to the internet.

3. Abolition of the death penalty

4. Separation of Religion and State with religious freedom for all.

5. Complete gender equality in all spheres of life

6. The rule of law and justice. A judicial system based on the presumption of innocence, the right to defence, effective judicial protection and the right to be tried in a public court. Total independence of judges. The abolition of Sharia law.

8. Recognition of private property, private investment and the market economy. All Iranian people must enjoy equal opportunity in employment and in business ventures. Protection of the environment.

10. A non nuclear Iran, free of weapons of mass destruction.

In our view, the evidence in favour of the NCRI as a movement that it is in our interests to support, is overwhelming.

Keeping The Beacon Of Hope Alive

NCRI/PMOI members work tirelessly to keep the beacon of hope alive for those suffering in Iran and Iraq. They organise meetings, big conferences, rallies, social events, petitions, letter writing and fundraising, here in the UK, across Europe, in the United States in the hope of persuading the international community to take a truly moral stand. To date, crimes against humanity committed by the Iranian regime against its own people since the 1980’s have not been investigated. The massacre of 52 at Ashraf last month and the current hostage situation are the most recent of these.

The NCRI want the leaders of the free world to take a firm moral stand. When all else fails there are those who choose to risk making the ultimate sacrifice by going on hunger strike whilst camping out in many European capital cities and in Washington. Currently, there are also 100 refugees in the prison Camp ‘Liberty,’ on hunger strike. This is indeed a desperate action but illustrates the refusal of members of the PMOI to use more aggressive methods.

There is total commitment to the peaceful running of this resistance movement, and the belief that there is a third option for Iran, ie. not a religious dictatorship, not the use of military intervention, but rather peaceful, democratic change from within. In spite of this, the PMOI and the NCRI are vilified and demonised as terrorists, torturers, cult members, human rights abusers etc. etc. I believe that western governments know that these claims are totally untrue but are prepared to go along with the propaganda machine of the Mullahs’ regime in order to avoid taking a moral stand for fear of the wrath and possible reprisals that may follow. In the wake of this, the media, also remain largely silent, either by choice or as a result of pressure from above.

Flaws In Our Democracy

Involvement with the Iranian Resistance Movement has made me very appreciative of the freedoms I have, living here in Britain but it has also opened my eyes to the flaws in our own precious democracy. I have discovered that the Government does not necessarily listen to its Members of Parliament, or even to the requests and recommendations from its own Parliamentary Committees. I have learned that whilst I am allowed to express my opinions freely, and make them known to the establishment, to observe and attend parliamentary committee meetings, to participate in demonstrations etc; my concerns, questions and comments, when addressed to members of the Government, will be responded to in a perfunctory manner and sometimes with the use of invalid or misleading arguments.

Shockingly, our Government has excluded Maryam Rajavi, the leader of the NCRI from coming to the UK. A significant number of Parliamentarians from both Houses and all parties would like to invite her to speak to Members of Parliament and to the public about the nature and aims of the NCRI. This is a democratic organisation, promoting peaceful change, respecting human rights and wanting genuine dialogue with western leaders. How can our Government exclude from our country someone who speaks for democracy and freedom, whilst welcoming as heads of state, some of the most savage dictators in the world?

The solid wall that the members of the PMOI and supporters face when trying to bring the attention of the free world and its leaders, to gross injustices and abuses, seems impenetrable at times, but we cannot afford to give up on our efforts to put right these wrongs. If we do, we will be allowing the rule of tyranny and extremism to overcome democracy, freedom, justice and humanity.