The support of Western countries for Iraq’s Maliki and by abstaining from actively supporting the Syrian democratic opposition, these countries have played a major role in the growth of extremism and terrorism.

On Saturday, July 26, in the conference of “Religious dictatorship in Iran, epicenter of sectarian wars in the Middle East,” Mrs. Maryam Rajavi, President-elect of the Iranian Resistance, called the system of Velayat-e faqih in Iran as the party that under the banner of Islam emanates extremism and is the principal element in the calamities and crises imposed on the Islamic World in Iraq, Syria, Palestine, Lebanon and elsewhere in the region. 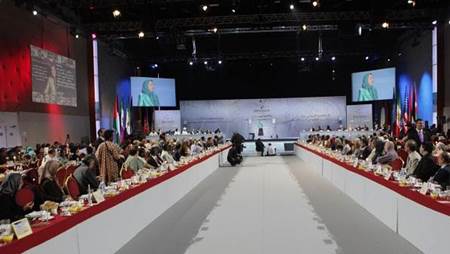 In a conference held in the presence of political and religious personalities from various countries from four continents, Rajavi described eviction of the Iranian regime as the practical solution to achieve peace, tolerance and democracy in the region. Concerning regional developments Mrs. Rajavi emphasized the following points:

1. We condemn the bombing of the defenseless people of Palestine by Israel and call for immediate action by the international community to stop the carnage and attacks against the civilians. We support the efforts of President Mahmoud Abbas to reach an immediate ceasefire. These attacks, which divert international attention from the crises in Iraq and Syria, serve, first and foremost, the interests of the Iranian regime and disrupt the process of ending the partition of Palestine and the formation of a national unity government, about which the regime is extremely annoyed.

2. Iranian regime’s dispatch of weapons, equipment and war planes to Iraq and Syria to preserve Maliki and Assad dictatorships is a violation of Security Council Resolutions. The world community must end its silence in this regard and force the clerical regime to stop sending weapons.

3. The U.S. government must not fall into the trap of taking sides and cooperating with the Iranian regime by providing support for a regime in Iraq which the mullahs are trying to prop up. This would be another major blunder in Iraq and will have no outcome other than plunging Iraq into civil war.

4. Fabrications by the Iranian regime about the Mujahedin-e Khalq (MEK/PMOI) supporting and having links with ISIS are absolutely false. The purpose of these lies is nothing but setting the stage for the massacre of the MEK members in Iraq and a repeat of the humanitarian catastrophes.

5. While we voice our abhorrence over the oppression and aggression against the Christians in Mosul, we support the position of the Association of Muslim Scholars and Iraqi tribes in condemning the forced displacement of Christians. The Association of Scholars has correctly characterized the suppression of Christians by the ISIS as “crimes against the innocents and departing from a path put forth by the Prophet of Islam in treating Christians and followers of other religions” and has called for the return of the Christians to their homes. 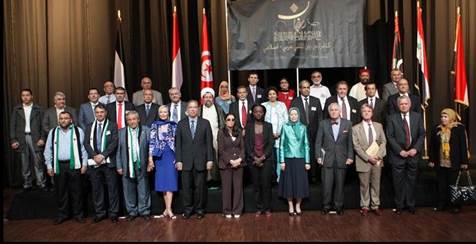 6. We urge the Arab and Muslim countries in the region to sever their political ties with the mullahs’ regime in protest against its export of terrorism and fundamentalism and its genocide in Syria and Iraq, as well as its incitement of wars and sectarian conflict in the Arab world, from Bahrain to Yemen and Lebanon.

7. The P5+1 appeasement of the Iranian regime regarding the nuclear issue and allowing itself to be dragged into the endless marathon of talks will bear no fruit other than giving this regime the opportunity to engage in further deception. The international community must demand the full implementation of Security Council resolutions, specifically a complete halt to enrichment. Nuclear talks must be coupled with holding the religious dictatorship to account as regards the flagrant violations of human rights in Iran, and the genocides in Syria and Iraq.

Nuclear concealment, the abuse of human rights, and the export of fundamentalism and terrorism are three indispensable attributes of the regime.

In another part of her speech, Rajavi said: “The Iranian regime and its Iraqi puppets are trying to exploit the current situation in Iraq to set the stage for suppressive and criminal actions against them. Under such circumstances, the United Nations and the United States must immediately transfer all of them either to Europe or to the U.S. consistent with their commitments and international law. And until then, they must undertake urgent measures to ensure their protection at Camp Liberty by stationing a unit of the Blue Helmets there.”

Speakers at the conference stipulated that summarizing the problem in Iraq as ISIS is a dangerous blunder that will only serve the interests of ISIS and the regime of Iran. They stated that the only way to prevent the expansion of this war is to support the Iraqi people, tribes and groups who are the principal elements of this great uprising and are themselves the best response to extremism as well.