Massacre in Refugee Camp – Iraq-Maliki Visit to US

I am a British citizen, a child of refugees who fled Nazi Germany, a mother, grandmother, and retired teacher. I feel lucky and privileged to be a citizen of a country where I am able to freely express my opinions, have access to virtually unlimited information; where I can wear what I like, be respected for who I am regardless of gender, religion, colour, political persuasion or sexual orientation.

These are also my human rights. However, I refer to them as privileges because they have been historically hard fought for, from time to time threatened and are not similarly respected in many parts of the world. I would like to think that the policy of the Government of my country, of whichever political party, would never be compromised in the cause of political or economic expediency, by its disregard for the human rights of the less fortunate citizens of other countries. 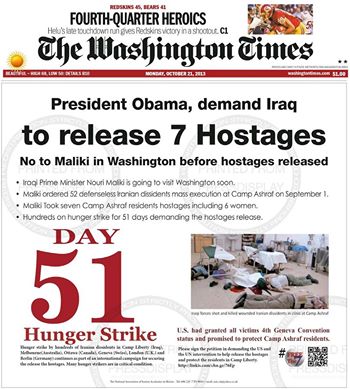 It is for these reasons that I am also an active supporter of Iranian dissidents who are campaigning for a free, secular, democratic Iran which espouses all the values that we in Britain take for granted and that are the foundation of a civilized, humane society.

The National Council of Resistance of Iran is the umbrella organization for opposition groups in Iran and in the Iranian Diaspora and has its headquarters in Paris. Its leader is Maryam Rajavi, whom I have met and found to be an inspiring and most of all genuine, humane person with great integrity. The largest member group is the PMOI/MEK. I have examined and continue to examine the plethora of information and misinformation about this group. The length and depth the Iranian regime propaganda machine has gone to demonize and vilify the PMOI/MEK has brought to mind the kind of propaganda used by Hitler against the Jews.

Tragically, it has been very successful and as a result, we have arrived at the current situation where the security forces of a Government that we helped to put in power have entered a refugee camp of Iranian dissidents in Iraq (Camp Ashraf), massacred 52 defenseless residents in cold blood (some of them handcuffed first) and taken six women and one man hostage. Our governments have been complicit in their virtual silence and inaction with regard to this on-going situation. The hostages are very likely being tortured. It is likely that they will be forcibly returned to Iran where they will almost certainly be executed. Extradition to Iran in these circumstances is in complete contravention of International Law. Moreover, the remaining PMOI members in Iraq who were tricked by the UN into being relocated to a prison camp, perversely referred to as Camp Liberty, have also been repeatedly attacked and have been denied adequate protection as well as easy access to the basic human requirements for water, electricity, and medical supplies.

The crimes committed as described above are just the most recent in a series of such attacks resulting in injury and loss of life and are part of a policy of extreme harassment and terror being perpetrated by Iraq at the behest of the Iranian Supreme Leader and his mullahs, to annihilate the PMOI. They were entirely predictable and it is certain that Camp Liberty will be subject to further attacks.

I have listened to and read the testimonies of those who are intimately familiar with this situation, those who were tasked to monitor the situation on the ground in Iraq and who knew Camp Ashraf and its inhabitants well. They include:

I have also listened to the impassioned pleas of British lawmakers, from those representing the 16000 members of the British Law Society, from respected members of the Church in this country and abroad, including Desmond Tutu, from congressmen and senators in the USA, including Patrick Kennedy and former Mayor Rudi Giuliani; from judges,(ambassadors and attorney generals; and from many European Parliamentarians, including the Vice President, Alejo Vidal-Quadras. They are all endeavoring to impress on their respective governments the need for concerted, effective measures to protect the 3000 plus survivors from further deadly attacks, to ensure the release and protection of the seven hostages and to find safe third countries for the refugees as a matter of utmost urgency.

It is incomprehensible to me that in spite of the overwhelming weight and the reliability of the sources of this evidence, the Government of my country chooses to rely on propaganda to inform its policy towards the NCRI and its leader, Maryam Rajavi and to guide its foreign policy. Thus, Maryam Rajavi is excluded from Britain, there is a complete absence of robust response to the atrocities. The media remain almost completely silent. Hunger strikers camped out in London’s Grosvenor Square, as well as in many other capitals of Europe and in the USA, who are making a desperate attempt to draw attention to the plight of their families and friends in Iraq and Iran, are being ignored.

Quite apart from the immediate moral imperative, the supporters of the NCRI, see that it is in the long term interests of the Middle East and indeed of our world to support a well organized movement that has spelt out very clearly its vision for a free, secular, democratic Iran whose citizens would enjoy freedom of thought, speech, association and dress, regardless of race, religion or gender, would participate in a free market economy in a country that would not have the death penalty and would be nuclear free.

It is quite clear that western governments fear ‘upsetting’ the Iranian regime, particularly at this time when it is thought some progress could be made to reduce the likelihood of Iran becoming a nuclear power. We are justifiably skeptical about the sincerity of those Iranian ministers making overtures to the west, (Rouhani’s record as a nuclear negotiator in the past is highly questionable). Perhaps, however, world leaders must be seen to be taking them seriously in order not to allow the small chance of genuine change, to slip away. As a result, attention has been diverted from Iran’s appalling human rights record (continuing relentlessly since Rouhani came to power – 250+ executions since June) and disregard for international law.. The massacre at Ashraf which is in fact a crime against humanity, and only the latest in a series of such attacks, (carried out at the behest of and with the full approval of the Iranian regime) should be a major issue for attention in these talks.

Why Is The West So Fearful?

Why is our fear of the prospect of a nuclear Iran so overwhelming? It is because this regime is an extreme, Islamist state whose leaders have shown no respect for the human rights of its own citizens or for international law, and which has been described as the world’s biggest sponsor of terrorism.

As much as the regime is feared, it’s most viable alternative: The National Council of Resistance of Iran must be heard.

Iran Kills Their Enemies Under The Noses Of UN And US

It is now 57 days that tens of men and women around the world have been on hunger strike, demanding the release of six women and one man member of the PMOI, who were abducted by the Mailki forces during a violent attack on Camp Ashraf on September 1, during which 52 men and women were handcuffed and massacred. Many have been hospitalized but are resolved to ask for their friends who are on the verge of death under torture on demand of the mullahs in Iran. The same people Tehran has been seeking for 36 years to eradicate and has not been able to, are now being killed under the eyes of our government, the UN and the US.

It is therefore with shame and horror that I bear witness, particularly, to the efforts of the government of my country to sweep this issue under the carpet and apparently to be willing to sacrifice the lives of the courageous people of Ashraf and Liberty, who represent the only viable option to the religious fascists in Iran, in order to appease the Iranian Mullahs.