Almost three months after the launching of 80 rockets on an Iranian refugees camp located near Baghdad International Airport leaving 24 residents killed and more than 100 injured, a group of residents held a rally demanding protection and guarantees for their basic rights. The protesters raised placards emphasizing the responsibilities of the United Nations and U.S. government regarding the residents’ protection, and called for urgent action to stop all prison-making measures carried out in the camp.

This site is known as Camp Liberty, home to thousands of Iranian opposition members associated with the People’s Mojahedin Organization of Iran (PMOI/MeK). These individuals were forced to transfer from Camp Ashraf, their 26-year-long home located in Diyala Province, northeast of Baghdad, to Camp Liberty based on an agreement (MOU) signed between the U.N. and Iraqi government back in December 2011. Under this text the Iraqi government had guaranteed Camp Liberty would be a temporary transit location (TTL) for the residents’ transfer to safe countries, and the residents’ security, protection and basic rights would be guaranteed until the last resident is transferred out of Iraq. 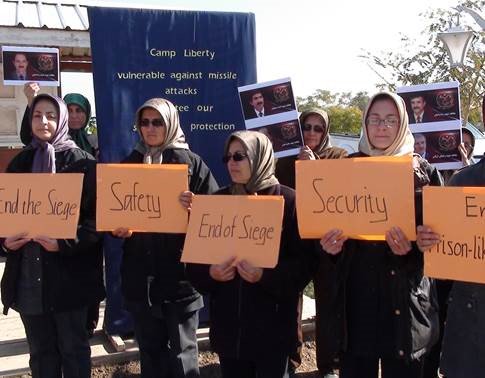 However, four years down the road it has been proven that not only is Camp Liberty anything but a temporary transit location, in fact it has been described as a prison worse than Guantanamo, erected by the Iranian regime and its elements in Iraq, and the U.N. and U.S. government have failed to live up to their commitments in reference to the residents’ protection and security.

Four deadly rocket attacks against this camp have left dozens of residents dead and hundreds of others seriously wounded.

Furthermore, the residents of this camp have been forced to live under a comprehensive and biased blockade, taking the lives of 24 residents who were deprived of medical care, and making daily life utterly harsh and miserable for the remaining residents. This camp has literally become a prison, according to international organizations. 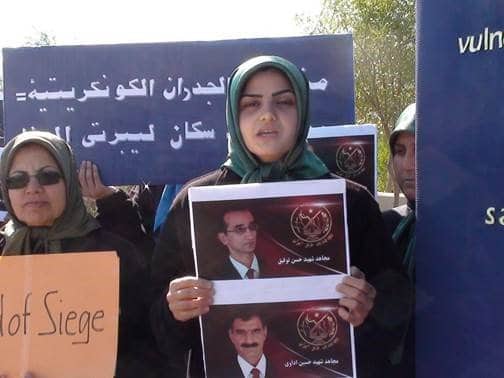 “As you know we have been imprisoned in Camp Liberty for around four years now, and even our basic rights have been violated,” said Masoume in this rally. “We have been attacked in four rocket barrages and we may be attacked again at any moment. As we speak many of our facilities in Liberty lack any protective blast walls (T-walls) and we will not feel safe until all of our quarters have T-walls installed around them,” she added.

“Unfortunately the camp lacks minimum international standards. Around three months ago we were the target of a major rocket attack, whereas based on an agreement T-walls were to be installed around our trailers,” said another resident. “But unfortunately, this has not been executed and the Iraqi government, acting at the behest of the Iranian regime seeking to massacre all of us, stopped this process. This is nothing but a violation of the agreement signed between the United Nations and Iraqi government. Based on this agreement the Iraqi government must provide for our protection,” he continued.

“We are asking the U.S. to take urgent action to have the installation of T-walls, which can protect our lives in the face of future rocket attacks, reinitiated,” said Somaye, another resident in this gathering.

“The U.S. government should pressure the Iraqi government to set aside its stonewalling and measures blocking the T-wall installation process,” she added.

The Iranian regime cannot tolerate any opposition even outside of its own borders. Considering the intense domestic and international crises on its table, especially with crucial elections at the end of this month, Tehran is resorting to any and all measures to carry out yet another massacre against members of its main opposition in Liberty. Taking into account the adoption of the U.S. defense budget bill, in which article no. 7 emphasizes on Washington’ s responsibility vis-a-vis Camp Liberty residents’ protection, the U.S. government is responsible in the case of any future massacre or damages the residents may suffer.