A month ago, the terrorist Quds force carried out a massive rocket barrage against a camp of unarmed and defenseless Iranian dissidents in Baghdad, leaving 24 dead and scores more wounded. In response, 21 Nobel laureates in different fields of physics, chemistry, medicine and economy added their voice to the international community by issuing a damning statement expressing their abhorrence over these attacks.

This was the fourth such attack against these refugees stationed in Camp Liberty, a deserted former US military camp near the heavily fortified Baghdad International Airport. Rockets also slammed into Liberty on three different occasions back in February, June and December 2013, killing a total 14 residents and leaving hundreds of others wounded.

The prominent laureates in their statement described the latest attack as a “vicious crime” and “without doubt a definite case of crime against humanity.” This atrocious barrage of enhanced 240mm missiles designed on Russian-model Katiusha rockets were launched only kilometers away from Liberty proved that Iran had specific links inside the Iraqi government to infiltrate into the airport area and carry out such a devastating attack that has left hundreds of paper-thin trailers literally torn apart.

To add insult to injury, the Iraqi government has completed this attack by escalating the already harsh blockade imposed on this camp, described as “an inhumane and criminal move obstructing delivery of food, fuel and medicine, and is preventing the entry of utility vehicles to the camp.” These measures are taking place at a time when the international community expects Baghdad to provide assistance for these innocent refugees to recover from this barbarity as soon possible.

The Nobel laureates also joined voice with countless politicians and dignitaries from across the globe in emphasizing on a very important issue regarding this attack. Back in April of this year, these very experts had issued an alarming joint statement underscoring the possibility of an imminent attack threatening the very lives of these refugees.

“We the Nobel Laureates … call on the US government, the European Union and the United Nations to take urgent action to guarantee the safety and security of these refugees.”

Unfortunately, as seen many times before, these and many other warnings by international organs fell on deaf ears. Highlighting the fact that the U.S. government, United Nations and Iraqi government promised

While these senior American figures made a bold move calling on the Obama administration to expand the “air perimeter around the [Baghdad] airport to make sure that this camp is not subject to further attacks by artillery or mortars,” the Nobel laureates emphasized on yet another very important aspect. Reminding the U.S. and UN of their commitments to provide the camp population’s safety and security, these experts made a humanitarian request seeking urgent medical care and a specialist team to station in Liberty to deliver the urgent medical services the wounded residents desperately need.

The ordeal the residents face on a daily basis is imposed by a government management committee that strangely receives its orders not from Baghdad, but from Iran’s embassy in the Iraqi capital. The elements in this entity are diehard loyalists to Iran. There ultimate goal: making life a living hell for the refugees as they are all members of the Iranian opposition group People’s Mojahedin Organization of Iran (PMOI), known as the MEK in the U.S.

This committee is also depriving the residents of the necessary machinery, equipment and supplies imperative to reconstruct the camp’s leveled trailers and destroyed infrastructures.

As these Nobel laureates have also emphasized on the need to provide more security for the Iranian refugees in Liberty, new signs are seen of Iran preparing for yet another attack against these innocent people. Urgent action is needed before more lives are lost. 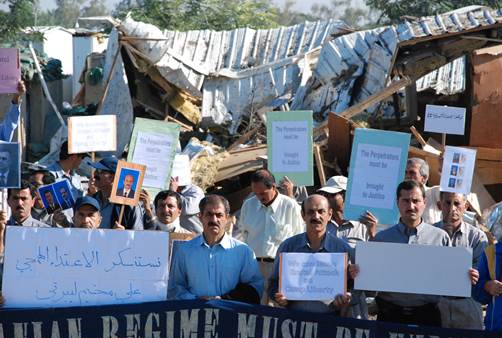